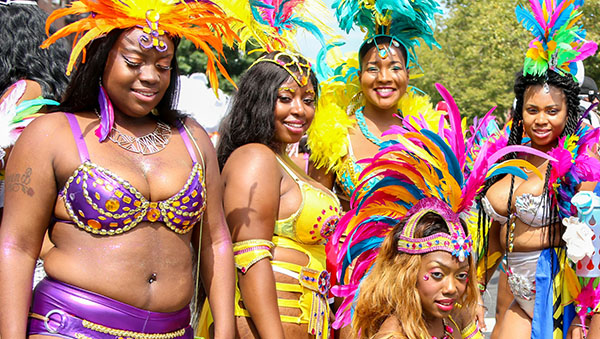 BROOKLYN, New York, September 3, 2017 (CMC) – Police in Brooklyn have arrested a woman, who has been waging what has been described as a constant noise complaint war on the Caribbean pre-carnival festivities, as the West Indian American Day Carnival parade climaxes tomorrow.

“It looks like she did place some kind of recording device, possibly an iPad, to victims’ faces after being told numerous times to stop doing so,” an NYPD spokeswoman said, following Reilly’s arrest.

The spokeswoman said Reilly “disregarded orders to stop harassing individuals, also called 911 making a false claim of a large disorderly group at the location, which obviously forced the officers to respond to the scene, possibly putting officers and others in danger. Obviously, there was no emergency that existed at that location.”

Reilly was arrested outside Pacific Gardens in Crown Heights, which was hosting a party for Trinidad’s Independence Day.

“We were celebrating because she’s been harassing us for years,” said Pagwah Mas’ ban member, Monica Gill, who witnessed the arrest. “There were about 25 police officers. They made up their mind that they were tired. As soon as they walked up to her, she started ranting.

“She was saying she’d been here for eight years,” Gill added. “But this is our culture—we’ve been doing this for 50 [years].”

Two Crown Heights venues, where Caribbean nationals practice and prepare for J’Ouvert and other West Indian American Day Carnival activities, said they are being unfairly targeted by Reilly, who regularly calls in 311 complaints and takes photos and video of them with her iPad.

Reilly said she is on a mission to curtail rehearsals for Despers USA, a steel orchestra that rents the lot on the corner of Classon Avenue and Pacific Street in Crown Heights for the annual panorama outside the Brooklyn Museum.

The police say Reilly has also called in numerous noise complaints to Pacific Gardens, an outdoor venue at 1067 Pacific Street, across from the Despers practice lot.

The seasonal Trinidadian venue has been open for three summers and is home-base for Pagwah Mas’, one of the largest mas’ bands in J’Ouvert

The police say Reilly has also called in numerous noise complaints to Pacific Gardens, an outdoor venue at 1067 Pacific Street, across from the Despers practice lot.

The seasonal Trinidadian venue has been open for three summers and is home-base for Pagwah Mas, one of the largest mas bands in J’Ouvert, Gothamist, a New York website, said.

It added, Reilly, who lives two blocks from Despers and Pacific Gardens on Bergen Street, and has lived in Crown Heights for eight years, also frequently surveys Bern’n, a food hall and event space, on her street, near Franklin Avenue in Crown Heights.

“It sounds like the same song,” she said in a recent phone interview, referring to the Despers rehearsals. “It’s extremely loud, and it’s not what I want to sit in my house and listen to.”

“I like to do photography, so I just photograph whatever is going on in my neighborhood,” Reilly added. “I do it for my personal use. I never know what I photograph until I get home; but, sometimes, I see something that’s strange, I just send it to the authorities.”

“And she might be the only one making the complaints, from what I believe,” he added.

“Over the years Community Board 8, 77th Precinct and the Department of Environmental Protection have all been working with Ms. Reilly to address her noise concerns,” said Michelle George, District Manager of Community Board 8.

“No other community resident has complained to Community Board 8 about Berg’n, Despers or Pacific Gardens.”