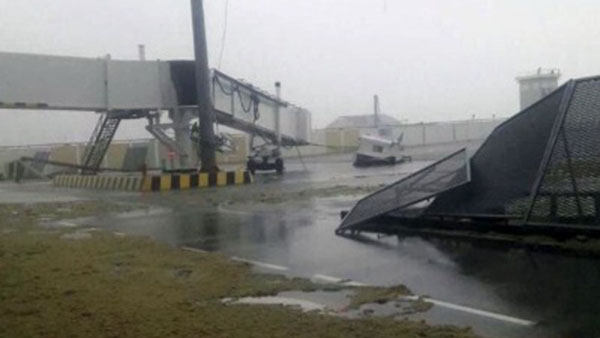 Princess Juliana International Airport in St. Maarten was devastated. Irma ripped through the airport, destroying safety fences; flinging sand onto the runway, as huge rocks smashed into planes; huge chunks of the airport building had also been strewn across the runway; and a jet bridge was snapped in half.

HURRICANE UPDATE: Irma Leaves A Trail Of Death And Destruction As Jose Threatens

BRIDGETOWN, Barbados, September 6, 2017 (CMC) – Hurricane Irma, the most powerful Atlantic storm in a decade, was churning its way across the Caribbean, after battering the Leeward Islands, on Wednesday, leaving at least one person dead and millions of dollars in damages.

But as the storm moved towards St. Thomas and Puerto Rico, residents in the chain of islands were eyeing Hurricane Jose, which the Miami-based National Hurricane Center (NHC) said that, at 5.00 pm (local time), had become a hurricane, with winds of 75 miles per hour (mph) and was located 1040 miles east of the Lesser Antilles.

There was at least one death in the English-speaking Caribbean countries, although there have been unconfirmed reports that at least two people died in the French-speaking territory of St. Martin, as Hurricane Irma made its way across the region.

Irma, packing winds of 185 miles per hour (mph), first hit Antigua and Barbuda, before embarking upon its path of destruction.

“We don’t have all the full details from the British Virgin Islands, at the moment, but given that the eye passed directly over Tortola, given the physical geographical conditions…we anticipate there should be significant needs being generated by the impact of the most severe aspects of the storm,” he told a news conference.

“We expect to see significant damage as a result,” he said, adding that CDEMA is now working to deploy teams into Antigua, hopefully by Thursday, “mindful that our plans may be varied somewhat, by the fast-advancing storm Jose, which is moving within the wake of Irma and showing some signs that it could move along a similar path.

“This means that there is a potential for secondary impacts for the north Leeward Islands, (and) that is being factored into our plans for the moment, but for now, we are hoping to deploy into Antigua, as our focal point to serve the needs of Anguilla and the British Virgin Islands from that point”.

He said, even as the teams are being deployed “we are turning our attention, positioning teams to respond to potential impacts in Turks and Caicos Islands and the Bahamas”.

“Already we have on standby military engineers and doctors to respond to the needs of Turks and Caicos and Bahamas,” he said, adding that relief supplies are also being mobilised.

The NHC said that Irma was closing in on St. Thomas in the United States Virgin islands and Puerto Rico, and this general motion is expected to continue for the next couple of days.

“On the forecast track, the extremely dangerous core of Irma will continue to move over portions of the Virgin Islands, during the next couple of hours, pass near or just north of Puerto Rico this afternoon or tonight, pass near or just north of the coast of the Dominican Republic, Thursday, and be near the Turks and Caicos and southeastern Bahamas late Thursday,” it said. 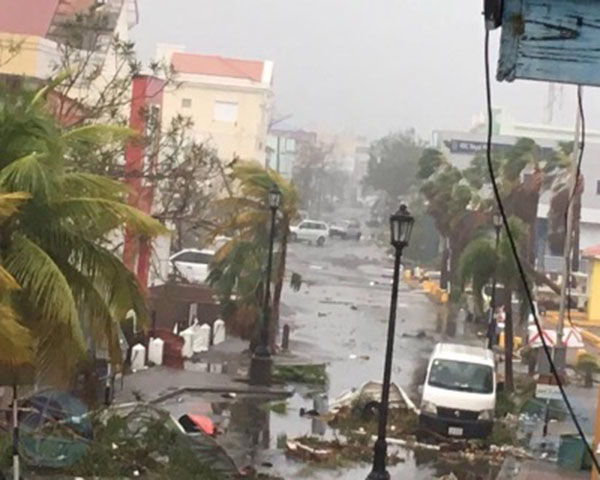 Hurricane Irma blasts through the Caribbean, leaving a trail of devastation and destruction in her wake.

Antigua and Barbuda Prime Minister, Gaston Browne, said he was thankful that Antigua had been spared any massive destruction as a result, but officials were expected to fly to the sister isle of Barbuda, where the eye of the Category 5 storm came ashore.

But he confirmed that one death, that of a child, had occurred on Barbuda, and described the housing stock as having been “decimated”. He is urging voluntary evacuation of Barbuda, calling the island “practically uninhabitable”.

Browne, who flew over the island on Wednesday afternoon, reported that not only was the housing and businesses destroyed but vehicles and other infrastructure was also destroyed.

Browne, accompanied by medical personnel and at least one police officer, used a satellite phone to call into the state-owned ABS television and radio stations, to provide the very first reliable news about the impact of Irma, overnight.

The French government said it was worried that thousands of people had refused to seek shelters on Saint Martin and Saint Barthélemy, where Irma left a trail of devastation, as homes, hotels and government buildings were reduced to rubble. There were no immediate news of casualties.

France sent emergency food and water rations to the affected territories where Irma ripped off roofs and knocked out all electricity.

Sand was flung onto the runway and huge rocks smashed into planes, as the storm swept over the tiny Caribbean island. Huge chunks of the building had also been strewn across the runway and a jet bridge snapped in half.

Dutch marines, who flew to three Dutch islands hammered by Irma, reported extensive damage but no deaths or injuries.

St. Kitts-Nevis’ Prime Minister, Dr. Timothy Harris, who toured some of the areas affected by the storm, said he was relieved and thankful there was no report of loss of life or significant injury to anyone.

“A category five hurricane is the most dangerous of hurricanes, and yet today, we can come to film, to video and to speak about the sparing of our lives, which is of critical importance because, with spare lives, we can now move on to pick up the pieces, as several families within my constituency, and I suspect throughout the country, would have to be doing,” Prime Minister Harris said.

“We will help our people to rebuild, individual by individual, household by household, and community by community. So far, the efforts that I’ve seen, give me the courage to continue to render good service to the country, because our people are determined to take matters into their own hands, as we have seen reflected in several of the communities, where people were out early and doing their very best to restore their communities to normalcy, and I want to commend that patriotism.”

Bahamas Prime Minister, Dr. Hubert Minnis, said his government was evacuating six islands because authorities would not be able to help anyone caught in the “potentially catastrophic” wind, flooding and storm surge. People there would be flown to Nassau in what he called the largest storm evacuation in the country’s history.

Dominica’s Prime Minister, Roosevelt Skerrit, said while there were “one or two little landslides and some fallen trees and so forth” on the island, “I think we were spared the ravages”.

But he acknowledged that some of the islands in the northern part of the Caribbean chain were not so lucky, and he has been in contact with some of the leaders affected.

Skerrit said that the Anguilla Chief Minister had indicated that the island was “receiving a pounding” and that the “winds were merciless”.

Skerrit said that Dominica therefore, stands ready to assist “with the little resources we have”.

“Once the assessment is received and the indication of what kind of support these islands would need, then Dominica would support, because one cannot forget the tremendous outpouring of love and solidarity in 2015, following Tropical Storm Erika.

“So we understand what these islands are going through, we understand the challenges, and the expression of solidarity to these countries in tangible ways, would certainly help in a huge way,” he added.

Both Jamaica and Trinidad and Tobago have also indicated a willingness to assist the affected countries.

“This is a period of assessment and planning, to ascertain what Jamaica can do to assist our Caribbean brothers and sisters, who have been significantly impacted by the most powerful hurricane to have emerged in the Atlantic Ocean,” Prime Minister Andrew Holness said.

Trinidad and Tobago Acting Prime Minister, Colm Imbert, said, in a statement, he remains “deeply concerned” at the situation, and “as this powerful weather system continues on its trajectory our thoughts now turn to those nations still situated within its projected path.

“The Government is monitoring the activity of this severe weather system and its impact on our neighbours in the region. We have been in contact with some of our neighbours and will do what we can to assist should that occasion arise,” Imbert said.

In Haiti — which is still recovering from the passage of Hurricane Matthew last year, and is expected to be impacted by Irma over the next few days — the authorities have closed all schools.

In addition, Michel-Ange Gédéon, Director General of the National Police of Haiti (PNH), said that as part of the preparations, all police officers of the 10 Geographical Departments must return to their posts, as soon as possible, until further notice.

“The departmental delegates will coordinate the actions, according to the structures set up. The town halls and Casecs will intervene in communes and communal sections, with the support of civil protection. The Minister of Planning will oversee the actions of NGOs and aid agencies. He will also have to keep in touch with the UN humanitarian system,” the Prime Minister said in a statement.