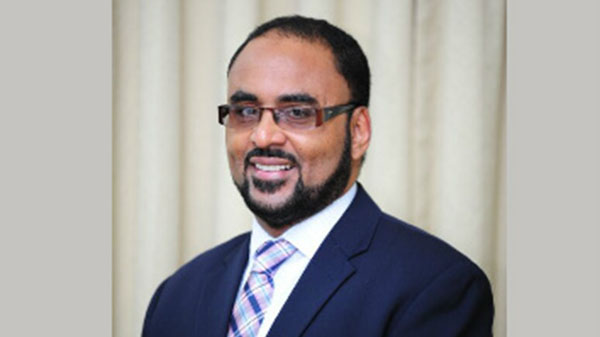 Isaac Anthony is the Chief Executive Officer of the Caribbean Catastrophe Risk Insurance Facility (CCRIF), a segregated portfolio company, which noted, today, that the 2017 Atlantic Hurricane Season still has two months to go, and the facility has already made payouts totaling US$31.2 million to six member countries. Photo credit: CCRIF.

“The CCRIF board and team offer condolences for the loss of life and hope these funds will provide some assistance. We stand ready to support the government and people of these CCRIF countries as they recover from the effects of this devastating hurricane,” said CCRIF Chief Executive Officer, Isaac Anthony.

The storm, which is now battering Cuba and the Bahamas as it makes it way to Florida in the United States, has been blamed for at least 10 deaths and millions of dollars in damages, as it blasted through the Lesser Antilles, earlier this week.

In the case of Barbuda, Prime Minister, Gaston Browne, has ordered an immediate evacuation of the almost 1,800 people on the island, and the government has also announced a state of emergency.

“All of the public institutions have been damaged. The entire public utility infrastructure has been decimated, including the telecommunications infrastructure. So there is literally nothing in Barbuda that is operational,” Browne said.

“Nothing is functional in Barbuda,” he said, adding that he has given instructions that “every single soul must be taken out of Barbuda”.

The CCRIF said it is verifying the payout calculations and is in discussion with the three governments, about making arrangements for transfer of these funds, which will be completed within 14 days after the event, as mandated by CCRIF’s operational guidelines.

“Anguilla and St. Kitts & Nevis also have Excess Rainfall (XSR) policies and CCRIF is assessing if these policies were triggered by the rains from Hurricane Irma, which may possibly result in a second payout under those policies. The assessment under the XSR policies will be determined in the next few days,” the CCRIF added.

It said that Hurricane Irma, now recognized as the most powerful Atlantic Ocean hurricane in recorded history, passed through the Leeward Islands as a Category 5 hurricane, with maximum sustained winds of 185 mph (300 km/h) and intense rainfall.

“Irma remains a strong storm and CCRIF continues to monitor the hurricane as it passes through the northern Caribbean and is also following the path of Hurricane Jose. CCRIF urges Caribbean residents and visitors in the projected path of these two storms to take continued precautions as it makes its way through the region,” the CCRIF said.

The CCRIF SPC is a segregated portfolio company, owned, operated and registered in the Caribbean. It limits the financial impact of catastrophic hurricanes, earthquakes and excess rainfall events to Caribbean and – since 2015 – Central American governments, by quickly providing short-term liquidity when a parametric insurance policy is triggered

Since its inception in 2007, the facility has made 22 payouts for hurricanes, earthquakes and excess rainfall to 10 member governments, totalling approximately US$69 million.

It said the new payments will bring the total to approximately US$85 million. Last year CCRIF made payouts totalling US$29 million to four countries after Hurricane Matthew.