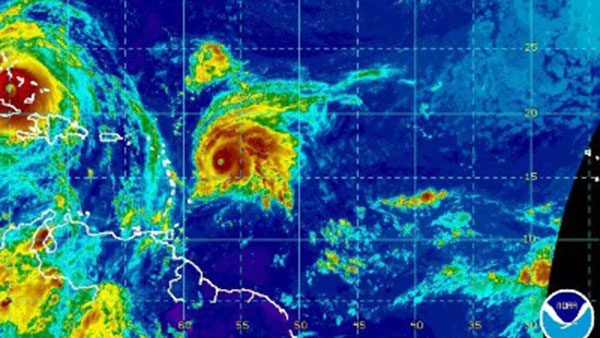 BRIDGETOWN, Barbados, September 8, 2017 (CMC) – Hurricane Jose remained a powerful Category 4 storm, as it made its way towards the Northern Leeward Islands, today, as nervous residents hoped it would veer away and towards the open seas, over the weekend.

The two major regional carriers, the Antigua-based LIAT, and the Trinidad-based Caribbean Airlines (CAL) announced a cancellation of several of their flights on Friday and Saturday, as Hugo, seemed to be following in the path of Hurricane Irma, which was blamed for several deaths and millions of dollars in damage, earlier this week.

Irma, which had pummelled several Caribbean territories, including Antigua and Barbuda, Anguilla, the Turks and Caicos Islands, Saint Martin and St. Barthelemy, had lost most of its 185 miles per hour (mph) strength, but was still a strong Category 4 hurricane with winds of 155 mph.

The Miami-based National Hurricane Center (NHC) said that Jose, located 355 miles east south east of the Northern Leeward Islands, had maximum sustained winds of 150 mph, and a turn towards the northwest, with a decrease in forward speed, is forecast for Friday night through the weekend.

“Jose is a category 4 hurricane on the Saffir-Simpson Hurricane Wind Scale. Some fluctuation in intensity, up or down, could occur during the next day or so. Gradual weakening is expected after that,” the NHC added.