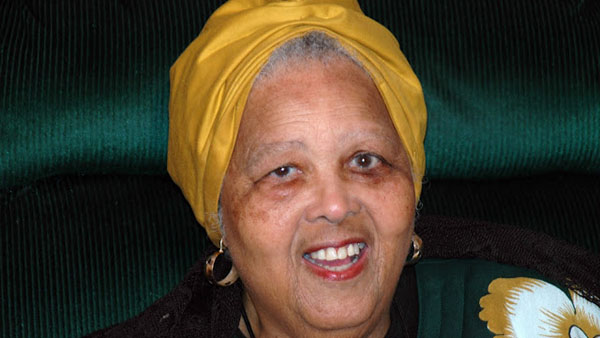 Jamaica’s renowned folklorist and cultural icon, Miss Lou -- whose real name was Louise Bennett Coverley -- was born on September 7, 1919, and passed away on July 26, 2006. Photo by Carl Henry.

TORONTO, Ontario, September 8, 2017 — A room at the Harbourfront Centre, a popular cultural hub on the waterfront in Toronto, was recently named in honour of Miss Lou, whose real name is Louise Bennett Coverley. It’s called “Miss Lou’s Room.”

McMaster University Library in Hamilton, Ontario, has the Louise Bennett Coverley fonds, which “reflects her life as both a writer, performer, and a promoter of the Jamaican language.”

The mover behind making these realities is Pamela Appelt, co-executor of the Louise Bennett Coverley Estate and a former judge of the Court of Canadian Citizenship, who is also the Chair of the Jamaica 55 Committee, which is coordinating events to celebrate Jamaica’s Independence across Canada. She served in that role for Jamaica’s 50th in 2012.

Appelt remembers Mike Colle, a provincial government minister, saying at the celebration of Miss Lou’s life at Revivaltime Tabernacle in Toronto, on August 3, 2006, that the province would like to do something that would pay tribute to Miss Lou.

She thought that they might consider a scholarship in her name but in her view it would not last very long. 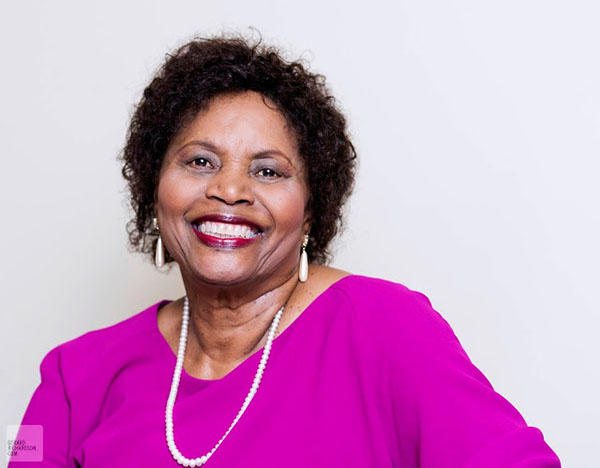 “ I was thinking in terms of a long-term commemoration of Miss Lou’s life here in Canada and having been a member of the board and the vice-chair of the board then at Harbourfront Centre, I know that we were in the process of naming a building after important people if we can get a certain amount of money from them.”

She called up the CEO, Bill Boyle, and asked him how much it would cost for someone to have a building named after them.

He told her the amount and she almost choked because she knew there was no way the government would have given that amount.

Referencing what Colle said at the memorial, they got together to hammer out what was possible at the Harbourfront Centre.

Initially she thought about the room on the main floor which is used as an art room, but Boyle suggested that she look at the room upstairs that is used for educational purposes.

“And once I got up there and I saw it, I said this is the space because it overlooks Lake Ontario which would remind Miss Lou of Jamaican waters, of the Caribbean Sea, and in the setting you really get a sense that you’re in the islands.”

Boyle told her what it would cost and she subsequently met personnel at the minister’s office.

“They asked me what is it I have in mind and I said we need a place where Miss Lou’s works and stories can be told, and the entire province and Canada can learn about Miss Lou. And they liked the idea; they said how much is this going to cost. I said, well, we’re speaking about the Hon. Louise Bennett Coverley so that comes with a price. I said nothing under a quarter of a million dollars will do, and they just looked at me like I was a mad woman. The long and short of it is we got $375,000.”

Appelt was impressed with the short space of time it took to get things done. The meeting was in July 2006 when Miss Lou died and by February 2007 the 3,000 sq. ft. room at the Harbourfront was opened for Miss Lou. Former Jamaican Prime Minister P.J. Patterson attended the official opening ceremony. 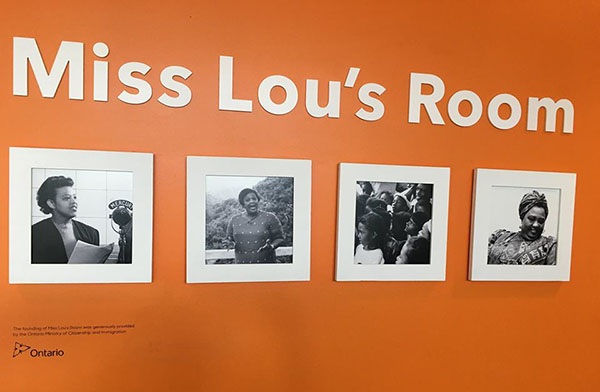 “Since then we have had there now a permanent exhibit honouring her life and her achievements. We have photographs, we have tapes of her storytelling and her performances, and there have been thousands of youngsters who have been there over the past number of years and listening to stories. We have dub poets, we have artists who have come there and told their stories.”

Appelt says it is her hope that as long as she is involved in the Harbourfront she will continue to use that space “to make our people more aware of it and to share our culture through that room.”

The new management at the Harbourfront shares her vision and they are working with other groups and organizations to ensure that the space is well used.

On February 11, earlier this year, millionaire business tycoon, publisher, broadcaster and civil rights activist, B. Denham Jolly, launched his memoir, “In the Black: My Life,” in Miss Lou’s Room.

About four years ago, Appelt took Earl Jarrett, CEO of Jamaica National Group, on a tour of the facility and he was so impressed that the company has been funding programs in Miss Lou’s Room for at least three years.

“She gave full support to any suggestions that involved Miss Lou,” said Appelt.

She noted that Miss Lou’s Room would not have been such a success if Mary Anne Chambers was not a Member of Provincial Parliament at that time.

A Jamaica 55 legacy project, involving Miss Lou’s name, will also be unveiled in Jamaica at a later date.

“This came about before the present government became the government and the request was made of me then to give permission to have a sculpture made for Miss Lou. That I did, and it was going to be in Gordon Town, but when the government came in now, we though how best can we continue to honour Miss Lou and I said what would be wonderful was just to ensure that the sculpture be placed at Gordon Town for her, and everybody bought into it.”

The sculptor was commissioned to do it, and Appelt thinks this will help the tourism in Jamaica also.

“It’s not just for Jamaicans to go and see but because they are so delighted about expanding tourism to Kingston, what a wonderful way to get a group of people to go up to Gordon Town and see the house where Miss Lou spent her years before she came to Canada and to see a sculpture in a park there for her. It will attract tourism and keep Miss Lou’s memory alive.” 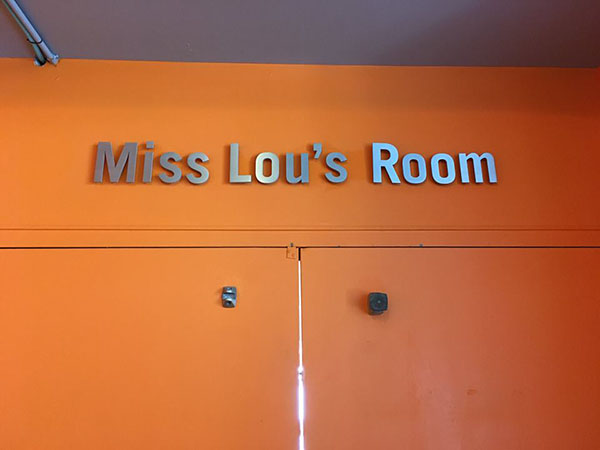 The entrance to Miss Lou’s Room. Photo by Neil Armstrong.

Appelt was also instrumental in making the Louise Bennett Coverly fonds possible at McMaster University Library that is available to anyone researching the beloved cultural artist.

Last year when Appelt was going to Jamaica for the National Library of Jamaica’s launch of the Miss Lou Archives, she invited the chief librarian from McMaster University, Vivian Lewis, who had never been to Jamaica.

“Since Miss Lou’s archives are there I thought it would be great for her to see what’s happening. It so happens that she was put on the program. She gave a beautiful speech, was taken on a tour of UWI and other parts of the institute and so on. And it paid off because they will be assisting in the training of archivists. They will have their archivist come and learn from McMaster and McMaster will send someone there as a sort of exchange program.”

McMaster, along with the library, will be putting out postcards which will have images of the library and Miss Lou on one side and McMaster on the other side of it.

Appelt is also very supportive of a new documentary, “Miss Lou Say So!” being produced by Miss Lou’s son, Fabian Coverley, co-executor of Miss Lou’s estate, and other collaborators. The documentary should be out in 2018.