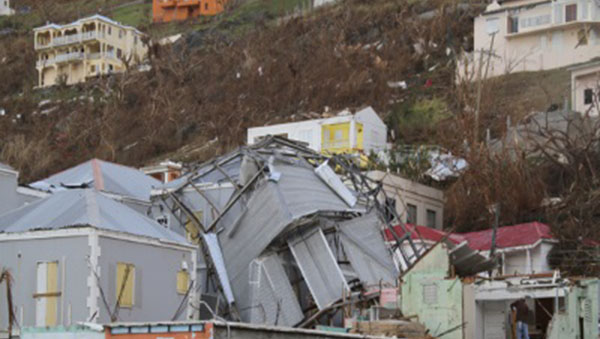 “I see a lot of hurricanes pass through here, but I never see none like this. Never! This one was bad,” a BVI resident told CMC. Photo credit: CMC.

“At Least We Survived,” Says British Virgin Islands Resident, After Hurricane Irma Plowed Through His Homeland

ROAD TOWN, British Virgin Islands, September 12, 2017 (CMC) — At age 64, Aubrey Forbes has experienced several severe storms, including the devastating Marilyn of 1995, which many older Virgin Islanders use as the yardstick to measure the impact of tropical cyclones on their islands.

However, Forbes, a Commissioner of Customs in the British Virgin Islands (BVI), all but had the wind knocked out of him when he saw his workplace — the Jost Van Dyke Ferry facility in West End, Tortola — on Monday, four days after Hurricane Irma battered the islands.

“It is unbelievable,” he managed to tell the Caribbean Media Corporation (CMC) after visiting the facility, which had been stripped of its roof by the winds and had the sea-surge deposit a crumpled sports utility vehicle (SUV) on a six-foot-high platform, outside the facility.

On land, the trees appear as if they were subjected to some sort of water flow that had defied the laws of gravity by flowing across the mountainside, rather than down it.

Various types of sea crafts, including large yachts and powerboats, lined the road leading towards the berthing facility.

Across the bay, at Sophers Hole, the remains of a large yacht are clearly visible, sitting atop a one-story building.

A closer examination shows that it was shredded, all as a result of the powerful sea-surged that battered the islands, depositing debris, including vehicles high on the incline of the hillside

“Man, everything is blown apart. Everything is just destroyed. This was one of the most beautiful harbours in the Virgin Islands and look at it today. You can’t believe. Wow! What is this?” said Forbes, who has been working in the Customs Department for three decades, and has seen the impact of a number of hurricanes.

For him, Hurricane Marilyn, which, in 1995, became the most powerful storm to hit the Virgin Islands since Hurricane Hugo of 1989, was the point of reference.

As far as Forbes is concerned, Marilyn was nothing close to the devastation that Irma has wrought.

“Marilyn passed over here, but it was nothing like this. This is the worst that ever passed over the Virgin Islands that I have ever seen. There’s nothing, nothing close [to Hurricane Irma] at all. Wow! Is this for real?” he stated. 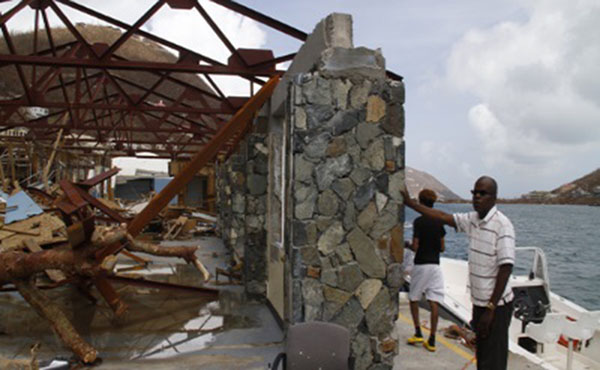 Forbes’ comments echo the widespread disbelieve at the devastation that Irma has cut across this British overseas territory.

Similar sentiments were expressed at the ferry facility in Road Town, where Kenneth Maduro, a dock master with the BVI Port Authority, was helping to clean up, so that people could travel between Anegada and Tortola.

“All the other hurricanes we had, we just bounce back like that. The only destruction we ever had was like road damage, fallen trees, some house roofs and poles, but nothing like this… it look like we had tornadoes in this one,” he said of the devastating power of the Category 5 hurricane.

Maduro, like other Virgin Islanders, says that the extent of the damage left by Hurricane Irma suggests that it was accompanied by tornadoes.

“All the buildings damaged, buildings falling, we never had this kind of destruction, all these years of hurricane,” repeated Maduro, confoundedly.

In addition to processing passengers to Anegada and Virgin Gorda, the dock is also used to ferry passengers to the US Virgin Islands.

“The dock, right now, there is some minimal damage, but it is still standing. But the building, as you can see, suffered a lot,” he said of the structure, which had the ceiling and cooling mechanism, installed in the roof, collapsing on the damaged and destroyed furniture inside.

He said the Port Authority was allowing ferries to take passengers to Anegada and Virgin Gorda and trying to control the traffic, ensuring that there is no destruction and that no one is injured.

Hurricane Irma did not discriminate when it swept across the island. It forced national disaster managers from their headquarters, sending them to the home of a nearby Member of Parliament.

They have since set up the National Emergency Operation Centre in a section of the recently constructed New Peebles Hospital, a high-rise building, which was generally unaffected by the hurricane.

The hospital is also a temporary home for the healthy — including some members of the Caribbean Disaster Management Agencies (CDEMA) team, doing rapid needs assessment — who sleep in the chapel at nights.

Governor, Augustus “Gus” Jaspert, who arrived in the British Overseas Territory nearly two weeks before the hurricane, was given a rude welcome, with the storm damaging the recently constructed new Government House, his official residence.

Ironically, the older Government House, which is now a museum, located adjacent to the newer one, was pretty much untouched by the hurricane.

Disaster management officials have not released figures about the impact of the storm, but have confirmed that five persons have died as a result of its passage.

They have not commented on the age, sex, or nationalities of the deceased, even as persons outside the territory try desperately to reach loved ones.

Disaster officials have also not commented on the number of persons, who were displaced and have moved into emergency shelters or with relatives.

However, a casual look across the country reveals the widespread damaged to the housing stock, as well as commercial buildings, vehicles and public infrastructure.

Power lines are down and there is no municipal-supplied water. Telecommunication is available only in a few places and is botchy where they do exits. Every day, people stand outside the offices of the telecommunication networks in the main city, trying to access the network to communicate with their friends and loved ones — most likely outside the country. 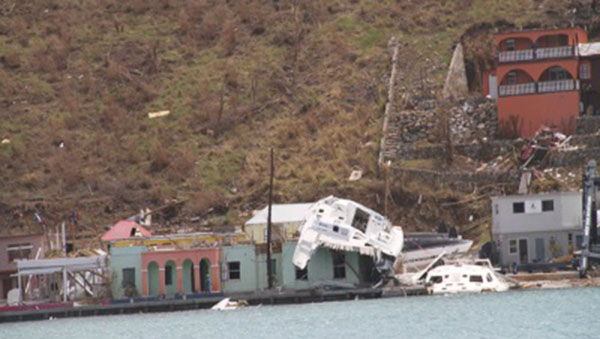 Back in West End, in Sophers Hole, 72-year-old Egbert Smith has also never seen a hurricane anything like what he experienced during the passage of Irma.

“It was scary like hell, all I can say is, it was scary,” he told CMC, adding that he was running back and forth inside his house trying to pick up the various items that were being blown down.

“But it was so bad afterward that I just left it. I sat down in my dining room, I put my two feet on a chair, my wife was in a clothes closet hiding, I went to check on her and I saw she was good, then when I couldn’t do anymore, I just [sat down],” he reflected.

Smith lost everything inside the bedrooms, all of which were trashed.

“I experienced a lot of hurricanes, but I’ve never been through one like this,” he told CMC, as he surveyed the damage outside his house.

“I see a lot of hurricanes pass through here, but I never see none like this. Never! This one was bad,” he told CMC, adding that the strength of the winds was just different.

“They say it was a Category 5 but I think it was more than that. It might have been more than that,” he said, adding, “At least we survived.”