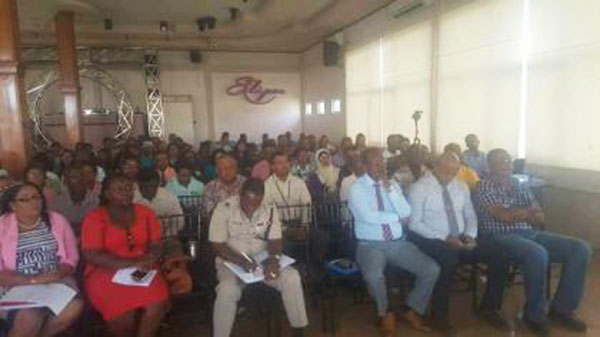 The aim of the Seminar was to inform the reporting entities of their obligations and responsibilities. It highlighted the importance of the 4th round of AML/CFT mutual evaluations and its requirements in order to ensure Guyana’s preparedness for the 4th round by 2022.

The Attorney General, in his opening remarks, emphasised that the main work of the CFATF is mutual evaluations.

He expressed the need for Guyana to work towards successfully exiting the 4th round of mutual evaluations and not fall back into the abyss of being a blacklisted country. The Attorney General solicited the cooperation of the reporting entities present at the meeting to realise this goal.

Director of Financial Intelligence Unit (FIU), Matthew Langevine, described the Financial Action Task Force (FATF) as an inter-governmental body, established by the Ministers of its member jurisdictions, with associate members such as the CFATF.

He explained the process of the 4th round mutual evaluations, which assesses a country’s Technical Compliance and Effectiveness.

Ramnarine Lal, Director of Bank Supervision Department of the Bank of Guyana, provided, in detail, the obligations and responsibilities of all reporting entities, while Head of the Special Organised Crime Unit (SOCU), Sydney James and Assistant Director of Public Prosecutions (DPP), Teshanna Lake shared insight into their respective roles and functions of SOCU and the office of the DPP.

It was repeatedly emphasised by the panelists, that the results-based nature of the 4th round, is the yard stick by which effectiveness is measured and country ratings are applied.

The outreach saw a large turnout from various reporting entities within the Port Mourant to New Amsterdam area of East Berbice, Region 6.

The question and answer session was vibrant, and many of the participants said they were appreciative of the exercise and suggested that similar exercises be conducted in the future. Reporting entities candidly stated their concerns and the panelists responded in kind.