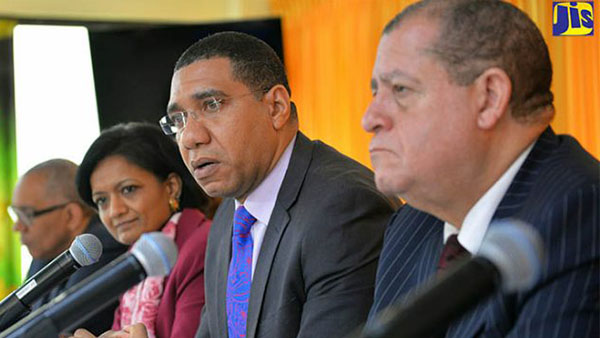 IMF Mission Chief, Dr. Uma Ramakrishnan (second from left), listens as Jamaica Prime Minister, Andrew Holness (second right), addresses a press conference at the Office of the Prime Minister, on March 3 of this year, to close out the visit of the International Monetary Fund (IMF) Mission team to review Jamaica’s performance under the Precautionary Stand-by Arrangement, for the period ending December 31, 2016. He is joined by (from left) Governor of the Bank of Jamaica, Brian Wynter and Minister of Finance and the Public Service, Audley Shaw. Photo credit: Yhomo Hutchinson/JIS.

Jamaica In Line For IMF Funds Next Month

KINGSTON, Jamaica, September 15, 2017 (CMC) – The International Monetary Fund (IMF) says Jamaica is likely to receive US$180 million in October, after an IMF delegation reached a preliminary agreement with the authorities on a set of policies that aims at completing the second review, under the Stand-By Arrangement (SBA).

The IMF delegation, headed by Uma Ramakrishnan, has ended a two-week visit, here, after conducting discussions on the second review of Jamaica’s financial and economic program, supported by the IMF’s precautionary SBA.

In a statement, Ramakrishnan said the IMF team reached a preliminary agreement with the authorities, on a set of policies that aims at completing the second review under the SBA, and that consideration by the IMF’s Executive Board is tentatively scheduled for October.

“Upon approval, an additional SDR 126 million (about US$180 million) will be made available for Jamaica, bringing the total accessible credit to about US$790 million. The Jamaican authorities continue to view the SBA as precautionary, and use it as an insurance policy against unforeseen external economic shocks, beyond Jamaica’s control,” she said.

“All quantitative performance criteria and structural benchmarks, at end-June 2017, were met. The central government’s primary balance surplus exceeded the program target by a healthy margin, mainly from buoyant corporate income tax. Non-borrowed international reserves also over-performed, and inflation is anchored within the Bank of Jamaica’s target range of four to six percent.

She said the Jamaican economy is rebounding, despite the impact of weather swings in 2017.

“Growth has been positive for nine consecutive quarters, with strong performances, especially in tourism, construction, and manufacturing. Unemployment reached 12.2 percent in April 2017, a seven-year low, along with a sustained expansion in the labour force,” she noted.

Ramakrishnan said for the financial year, 2017-18, economic activity is projected to expand by 1.6 percent, slightly lower than anticipated, as flooding adversely impacted agriculture. Over the medium-term, economic expansion is expected to be around 2.5 to three per cent, as sustained reforms yield higher investment and productivity dividends.

“There was broad agreement on the need to accelerate the public sector’s wage negotiations; further delays pose significant risks and uncertainty to the government’s fiscal accounts. It was also acknowledged that wage negotiations should be anchored on a forward-looking medium-term compensation framework to sustainably reduce the wage bill and release resources for the much-needed social and growth-enhancing spending.

“Going forward, it is important to rethink the extensive and inequitable system of allowances and the overall pay structure in the public sector,” Ramakrishnan said, adding “more fundamentally, reforms to a large and inefficient public sector cannot be delayed any further”.

She said achieving greater efficiency requires a scale back of the roles, responsibilities, and overall size of the public sector. Strengthening the procurement process would also ensure a timely execution of capital projects.

The IMF official said that there was broad consensus on anchoring monetary policy on price stability, with a flexible and market-determined exchange rate.

“In this regard, the team commends the BOJ for the successful introduction of the BOJ Foreign Exchange Intervention and Trading Tool (B-FXITT) in June, creating a transparent and market-based exchange rate price discovery mechanism.

In addition to the resolution regime for financial institutions, revisions to the BOJ Act are under consideration to crystalise the central bank’s mandate around price stability, along with a governance framework and balance sheet strength that support that mandate,” she added.