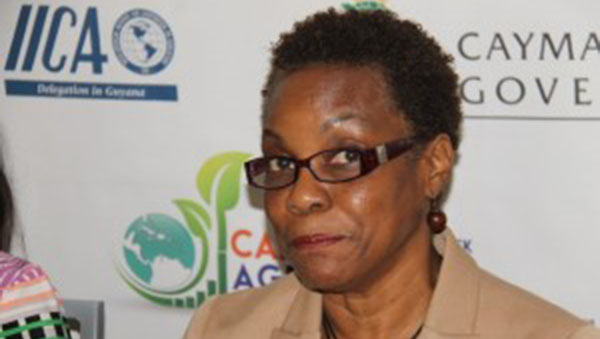 Lystra Fletcher-Paul, Deputy Sub-regional coordinator for the Caribbean for the Food and Agriculture Organization’s (FAO), noted that with rural areas now being targeted, financial support for small farmers will be critical to the success of this initiative. Photo credit: www.demerawaves.com

But three decades ago, agriculture was the main income earner for most CARICOM countries.

However, a combination of a loss of preferential access to global markets, new and emerging industries, and the impact of natural disasters on crops, have resulted in that sector no longer having pride of place as the mainstay of the region’s economy.

Guyana President, David Granger, recently told his regional colleagues that CARICOM’s food insecurity must be reversed if the Caribbean is to survive.

“International food prices have been declining for the major traded agricultural products and are at the lowest levels since 2009. Yet, the food import bill of CARICOM has been rising and stands, today, at over US$4 billion annually,” he said.

Now, regional stakeholders are working to once again raise the profile of the industry, aware that it cannot return to the glory days. The focus now is on innovation, sustainable agriculture and rural development.

This was the theme of the recently-concluded 11th meeting of the Regional Planners Forum on Agriculture — held in Barbados last weekend — which focused on three main areas: financial services, investment and institutional strengthening; climate smart agriculture; and value chain and inclusive markets.

At the end of deliberations, the Deputy Sub-regional coordinator for the Caribbean for the Food and Agriculture Organization’s (FAO), Lystra Fletcher-Paul, noted that with rural areas now being targeted, financial support for small farmers will be critical to the success of this initiative.

She told the Caribbean Media Corporation (CMC) that the FAO and CARICOM are now examining a Latin American model, under which small farmers are granted lower interest rates, as well as support for young farmers and women’s groups to encourage investment in agriculture.

“The second major recommendation … was … a proposal for government to impose a one percent levy on food imports. And that levy would be used and pumped back into research and development for innovations in agriculture,” Fletcher-Paul said.

On the area of climate-smart agriculture, regional officials stressed that the effects of climate change on the sector can no longer be overlooked.

Program Manager for Agriculture and Industry at the CARICOM Secretariat, Nisa Surujbally, pointed to the recent passage of Hurricane Irma as evidence of the need for member states of the Caribbean Community (CARICOM) to adopt climate-smart agriculture practices. 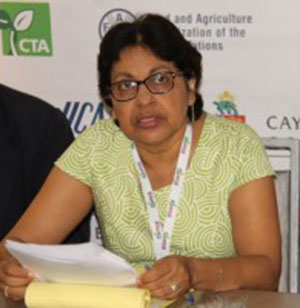 “Hurricane Irma underscores even more, the need for climate-smart agriculture to be a main component of agricultural planning, and national disaster preparedness planning. We have been working, assiduously, to mainstream climate change and disaster planning into the policy framework for the agriculture sector, both nationally and regionally,” Surujbally told the meeting.

Fletcher-Paul stated that one of the recommendations from the meeting was the implementation of an audit tool, to determine how well climate change and disaster risk management is mainstreamed into the regional planning system.

“The thing about that planning tool, it’s a very powerful instrument that countries can use to make sure that they build in all these recommendations that deal with making the country more resilient to disasters and climate change.

“That particular audit tool should be institutionalised in such a way that countries, which use that tool, can get preferential treatment, in terms of being eligible for funding, under the green climate fund; in other words you comply with the fact that you are mainstreaming climate change and disaster risk management in your planning process, which means you have a priority in terms of consideration or that environmental-type funding,” she noted.

Another recommendation, Fletcher-Paul stated, was for farmers, who adopt climate-smart agriculture technologies, to be granted tax incentives.

The linkages between agriculture and other critical sectors, including health, was also high on the agenda.

Of particular concern, is the rise in non-communicable diseases such as obesity, in the Caribbean.

“Because of this major problem we’re having to deal with obesity in the country. We think that our value chain and our whole food system should be geared towards addressing this whole issue of health, in promoting sustainable food systems for healthy nutrition.

“So all your value chains and your product should be geared to producing, not only raw materials, but processed products that are healthy and nutritious and aimed at promoting that healthy lifestyle, especially among the young people,” Fletcher-Paul told CMC.

She pointed to the FAO’s work in linking small farmers to school feeding programs in a bid to promote healthy eating.

Those recommendations will be presented to the meeting of CARICOM’s Council for Trade and Economic Development (COTED) in Guyana next month.

Barbados’ Chief Agriculture Officer, Lennox Chandler, highlighted the need for innovation within the sector, given the increasing nutrition needs of the world’s growing population. 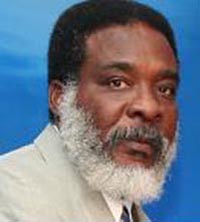 “And we suggested that, among others, there are two main ways of addressing an increase in demands for food: one is to increase the land under production and 2, by producing more food per year. But for most countries in the region, option one is not a viable option, and certainly not for Barbados,” Chandler said.

He noted the current thrust, locally, to promote cassava and its by-products, which include cassava bread, cassava sorbet, among others, as part of the overall campaign towards healthy eating.

Fletcher-Paul cautioned, however, that CARICOM member states, represented at the Bridgetown talks, should not wait “for the government to do things”

“There are simple measures that each one of us, the agencies, the delegates, can start doing on their own, as soon as they get back to their countries.

She added that she believes such initiatives are critical if the Caribbean is to achieve the second United Nations Sustainable Development Goal of food security and a world free of hunger by 2050.