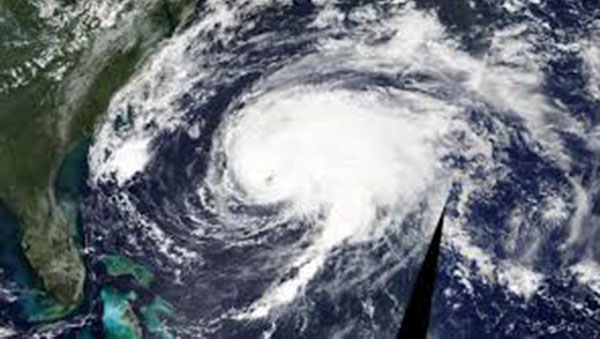 BASSE-TERRE, Guadeloupe, September 19, 2017 (CMC) – Hurricane Maria is being blamed for at least one death on the French-speaking Caribbean nation of Guadeloupe, yesterday, prior to making landfall in Dominica.

According to government officials, one person was killed when a tree fell, and two others went missing in a shipwreck off the coast of the French territory.

The French government, today, reported that there was no major damage on the island of Martinique, another French territory in the region, although 50,000 homes lost power and 10,000 thousand are without water.

The Miami-based National Hurricane Centre in its advisory, issued at 5pm (local time), said Maria, which was downgraded to a Category four, after making landfall in Dominica, has regained strength and is once again a powerful Category five system.

Maria is moving toward the west-northwest, near 10 mph and this general motion is expected to continue through Wednesday night.

On the forecast track, the eye of Maria will move near or over the U. S. Virgin Islands, late Tuesday, cross Puerto Rico on Wednesday, and then pass just north of the coast of the Dominican Republic, Wednesday night and Thursday.

The Hurricane Centre says some fluctuations in intensity are likely during the next day or so, but Maria is forecast to remain an extremely dangerous category four or five hurricane, as it moves near, or over, the Virgin Islands and Puerto Rico.

However, slow weakening is expected after the hurricane emerges over the Atlantic, north of Puerto Rico and the Dominican Republic.

Meanwhile, the Meteorological Service of the Bahamas has issued a Hurricane Watch for the Turks and Caicos Islands and the Southeastern Bahamas.

However, a hurricane warning remains in effect for St. Kitts Nevis, Montserrat, the US and British Virgin Islands, Puerto Rico, Culebra and Vieques.

A Tropical Storm Warning is in effect for Saba and St. Eustatius, St. Maarten, Anguilla, Guadeloupe, West of Puerto Plata to the northern border of the Dominican Republic and Haiti.

A Hurricane Watch is in effect for Saba and St. Eustatius, St. Martin and St. Barthelemy, Anguilla, the Turks and Caicos Islands and the Southeastern Bahamas.