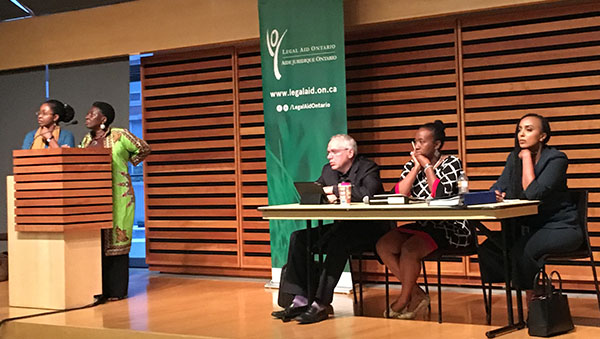 Left-right: Angela Robertson and Debbie Douglas, facilitators at the podium, while sitting on the panel are Julian Falconer, Asha James and Moya Teklu at a community meeting, organized by Legal Aid Ontario at the Toronto Reference Library on Wednesday, September 27, 2017.

TORONTO, Ontario September 28, 2017 (PRIDE) — Legal Aid Ontario’s community meeting — held last night — about legal services for Ontario’s Black communities, drew many who are on either side of its decision to defund the African Canadian Legal Clinic (ACLC), effective September 30.

Three days before the cut-off of funds, LAO held a meeting, at the Toronto Reference Library, to gain community input about setting up a new, independent, Black-focused and Black-led clinic.

It was also held to talk about the services that the provincial body is currently providing to increase access to justice for members of Ontario’s Black communities, through partnerships with the Human Rights Legal Support Centre, members of the private bar, and the Test Case Program.

Among those in attendance from LAO, who made opening remarks, were David Field, President and CEO; Derry Millar, a Board member; and Moya Teklu, a staff lawyer.

Julian Falconer, LAO’s spokesperson; Asha James, Managing Associate at Falconers LLP; and Teklu sat on a panel, responding to questions and comments from a spirited audience.

The questions and comments were many, ranging from an examination of LAO’s own deficits, to the lack of diversity on its board, to what will become of the staff of the ACLC, refuting the findings of the Pricewaterhouse (PwC) audit, to what are the next steps in setting up a new legal clinic, responsive to the legal services needs of the Black communities, and much more.

The facilitators were Angela Robertson, Executive Director of Queen West Central Toronto Community Health Centre, and Debbie Douglas, Executive Director of Ontario Council of Agencies Serving Immigrants (OCASI), who tried to ensure that all who wanted to speak, at the two microphones in the room, could do so and get responses from the panel.

Field said every dollar that LAO currently provides would be reinvested back into services for the Black community.

“I am confident that we’ll be able to have a new Black-led, Black-focused, independent legal clinic up and running, as soon as possible,” he said, acknowledging that the prospect of defunding the ACLC causes anxiety.

He noted that LAO is committed to fighting anti-Black racism in the justice system, and that the best way to do that is to support a strong Black-led, Black-focused, independent community legal clinic.

Field said, for the long term, LAO is committed to investing additional funding to improve access to justice for members of the Black community.

“It is our hope that this new clinic will build on the work done by the ACLC and continue to provide a range of services, from test cases and law reform work to direct services to the community.”

He said that three LAO staff members, Wayne van der Meide, Regional Manager of the case management and litigation group; Kimberly Roach, policy and counsel for its racialized community strategy; and Teklu, who is leading the development and implementation of LAO’s service plan to the Black community, were there to talk about how the provincial body will expand services in the future.

Field said LAO is not just a funder, but its central purpose is to expand access to justice, noting that the people who work there, do it because they want to be advocates for social justice.

The president and CEO said there are areas where LAO needs to improve, noting that the organization has faced financial challenges, and has had an independent review that confirmed that the viability of its financial plan is already bearing results.

“It is clear from our experience, that the ACLC funding decision took too long, that our dispute resolution process needs to be revised, and our Board composition needs to be more reflective of the community that we serve,” he admitted, adding “Our challenge in board composition is that we do not appoint the board of Legal Aid Ontario, that is done by the province, in conjunction with the Law Society, however, we’re having conversations with the Attorney General and the Ministry of the Attorney General to address this issue.”

Field said the proof of these commitments will have to be demonstrated over the course of the months ahead.

“It’s a very sad and difficult time. ACLC has done important work, and excellent work, for many years. It’s an important symbol for the community,” said Millar, regarding the decision of the Clinic Committee of the board to stop the funding to the ACLC.

He said the concern that led to the defunding of ACLC was not, and does not, relate to the work of the staff.

“The concerns relate to the board and the management of the clinic and the refusal to be accountable for public funds. The decision is the result of a seven-year process, during which LAO has provided every possible support to address serious and ongoing concerns, regarding financial mismanagement of public funds and lack of board governance,” he explained.

Millar said the process has taken as long as it has, partly, because LAO did not want to defund the clinic.

He added, LAO wanted the clinic’s board and management to succeed in fixing the problems, and gave them every opportunity, and many years, to do so.

In a video shown, journalist, Desmond Cole, interviewed Julian Falconer, counsel retained by LAO, about the decision to defund ACLC.

Falconer said the PricewaterhouseCooper (PwC) audit was conducted in the strangest of circumstances, in which the executive director insisted that she be present for every interview of any employees, including the bookkeeper and the board members. He said this set off alarm bells.

“The problem here, is that there seems to be a challenge in convincing ACLC, particularly their ED (executive director) of the necessity of accountability, and so LAO was left in the circumstances. It isn’t in charge of the clinic; it doesn’t manage the clinic. The clinic is independent; ACLC is independent.

“As a funder, LAO is responsible to make sure that its funding powers are accounted for, and the only power it has to enforce that, is to withdraw the funding, if nothing else works. And that’s where we’re left today, they’ve withdrawn the funding,” said Falconer.

Teklu said anyone experiencing legal issues, relating to anti-Black racism, can call a toll free number — 1-833-374-8904 — that has been established and a LAO staff member will answer.

The Human Rights Legal Support Centre has agreed to take up any additional needs that relate to breaches of the Ontario Human Rights Code, discrimination and anti-Black racism.

There are six lawyers — with expertise in human rights; criminal, labour and employment; family; education; police complaints; and immigration — who have agreed to provide services.

“In the long term, Legal Aid Ontario’s commitment to our community is that there will be no reduction in the level of funding that was available through the ACLC. That was approximately $825,000 per year. The other commitment is that the organization will be Black-focused and Black-led. Outside of that — whether the clinic delivers direct services, whether the clinic is involved in test case litigation and law reform — is essentially up to all of you,” she said.

Teklu said members of the advisory committee, who are independent of LAO, will be reaching out to community members.

Explaining the establishment of the committee, Teklu said she was tasked with setting up and ensuring that there was no disruption, or interruption, in the services provided to the Black community, so she began to reach out to members of the community.

“And some of them said, I hear what you’re doing, I think it’s very important, I commend you for doing this work, It’s a long time coming but please lose my phone number. And the rest of them joined the advisory committee,” Teklu noted.

She said with the exception of Aba Stevens, with whom she went to law school, she did not know the others of the committee.

Teklu said she wanted to be transparent, but also to engage people that have a reputation of fighting anti-Black racism, of speaking truth to power, and respected credibility in the community.

“The folks that are on this advisory committee are lawyers, Roger Rowe and Aba Stevens; professors Rinaldo Walcott and Idil Abdillahi; Sandy Hudson, one of the co-founders of Black Lives Matter Toronto; and Zanana Akande, the first Black female member of the provincial parliament,” she said.

She emphasized that they are independent of LAO and are volunteers.

“They get nothing out of being on this advisory committee, except knowing that the services that our community needs will be delivered, and that what is created in place of the ACLC is something that will be responsive and reflective to the needs of our community,” added Teklu.

She noted that clinics are independent corporations and are accountable to their boards and their membership, and so LAO can’t just set something up, Teklu said, in response to a question about timelines. The new clinic will be set up within one year, as soon as possible.

Falconers LLP Managing Director James said LAO can’t appoint people to the ACLC board and that it does not have the power to remove anyone from the board of a legal clinic or to shut down any clinic.

LAO is an independent but publicly funded and publicly accountable non-profit corporation, established to administer the province’s legal aid program. There are 76 legal clinics in Ontario.

It was noted that since 2009, 25 staff and board members of the ACLC have gone to LAO about the ACLC.

The 103-page final Clinic Committee decision, dated August 16, 2017, noted that LAO staff first became aware of concerns, with respect to the financial management and governance practices at the ACLC, in 2009.

Last Saturday, September 23, Friends of the African Canadian Legal Clinic held a protest march, to save the ACLC, at 255 Dundas Street, West, in Toronto.

One month earlier, on August 24, ACLC held a community meeting at Toronto City Hall, where Margaret Parsons, Executive Director of the ACLC, said the targeting of the legal clinic by LAO was not based on the fiduciary mismanagement of public funds.

“We are calling for Premier Kathleen Wynne and Attorney General, Yasir Naqvi, to conduct a thorough and independent investigation of LAO’s biased, unjust and racist decision to defund the ACLC. It is our hope that their findings will exonerate the ACLC,” she said.

Parsons said LAO has selectively focused on three main allegations: a ring charged to the clinic’s credit card; $39,000 from LAO funds paid for taxis; and the payment of what it calls staff overtime bonuses of $121,000 or $150,000.

At the meeting, she provided a receipt of $780.00, dated July 20, 2012, as evidence that the money charged to the credit card was reimbursed.

“The maximum annual amount paid by LAO funds for taxis is approximately $3,000 for 7 staff. This is much cheaper than paying mileage and parking,” noted a handout given to everyone attending the meeting.

“Why does LAO think that Black lawyers should not be paid for the long hours they work?” she asked.

Parsons said it has been a difficult and trying time — a 23-year battle with LAO.

She noted that this particular issue started on Sept. 7, 2009 and that it has been ongoing and relentless.