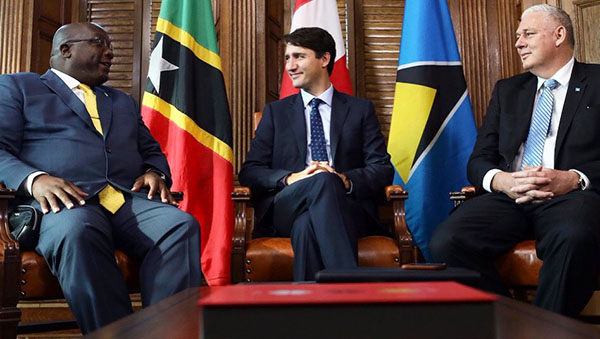 During what was described as a "wide-ranging dialogue", in his Parliament Hill office, yesterday, Canadian Prime Minister, Justin Trudeau (centre), appears to be sharing a moment of conviviality with OECS Chair and St. Lucia Prime Minister, Allan Chastanet (right) and Dr. Timothy Harris, Prime Minister of St. Kitts and Nevis, who were both members of a high-level OECS delegation visiting Canada.

The Prime Minsiter made the committment, during a meeting, in Ottawa, with Dr. Timothy Harris, Prime Minister of St. Kitts and Nevis and Allen Chastanet, Prime Minister of St. Lucia, both members of a high-level delegation, representing the Organisation of Eastern Caribbean States’ (OECS) Monetary Council, which held discussions with Canada’s major banks, in Toronto, earlier in the week.

The wide-ranging discussion, held in the Prime Minister`s Parliament Hill office, covered: de-risking; correspondent banking; Small Island Developing States (SIDS), like those in the OECS; and the process called graduation, which has implications for borrowing rates extended to SIDS.

Canada`s advocacy for small states in multilateral fora was also discussed by the leaders, along with trade, investment and tourism between the OECS and Canada — as well as opportunities to increase people-to-people contact through educational programs and cultural exchanges.

Prime Minister Trudeau acknowledged the Canadian-Caribbean relationship as a pivotal partnership in the Western Hemisphere, and committed to work with Prime Ministers Harris and Chastanet, as well as with their colleagues in the Caribbean, for the mutual benefits of their citizens and countries.

During their discussion, the three leaders agreed that the 2018 Canadian presidency of the G7, which comprises the seven richest economies in the world, and the hosting of the 2018 Commonwealth Heads of Government Meeting (CHOGM) by the United Kingdom, which will welcome leaders from all 52 member countries, provide an opportunity to make meaningful change across a host of socio-economic issues.

Trudeau also noted that his country will continue to take a leading role in ensuring that climate change remains at the top of the international agenda.