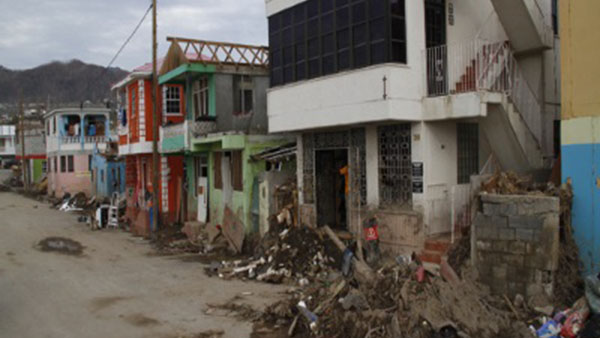 Hurricane Maria In The Eyes Of Two Small Businesses In Dominica

ROSEAU, Dominica, October 6, 2017 (CMC) – A decade ago, when Clyde Edwards got an opportunity to relocate his general grocery business to Riverbank, he did not hesitate. The location was considered a prime spot in the city for his type of business.

“This used to be a bus stop so, to me, this was the last stop. The customer wants to come off the bus or they are going on the bus, they pick up their stuff and they head straight out,” he told the Caribbean Media Corporation (CMC).

But after two extreme weather events, both of which left significant loss and damage to “M&C Superite”, Edwards is beginning to wonder if the location — which in good times is such a blessing — should not be reconsidered.

For the second time since 2015, Edwards has to absorb thousands of dollars of losses as a result of tropical cyclones.

“As you can see, total lost and that is really the second time in two years,” Edwards said, as he pointed to the debris inside the business place.

“In Erika, we got a serious hit and then this one is worse than Erika,” he told CMC, as he and some of his four employees attempted to clean some of the 18 inches of mud from the floor.

“We never expected to see the level of water that came in,” Edwards said.

Edwards estimates that the damage and loss would amount to at least EC$60,000, an illustration of the devastating impact of the Category 5 hurricane on the Dominican economy, especially on small businesses, many of which do not have insurance.

However, Edwards’ business, like many across the country, suffered a second hit in the days after the hurricane.

“I’ve been to certain areas in the countryside and even small shops in the country areas, a quarter the size of this, they were broken into and ravaged by the looters. I think the looters did as much damage to small businesses as the hurricane did to the rest of the country,” Edwards told CMC.

Edwards said that when he went to the store two days after the storm, the upper shelves still had salvageable items.

“But by Thursday, by Friday, the looters had actually forced that door open and they help themselves to everything,” Edwards told CMC, pointed to a metal door that was barely hanging from one of its hinges.

The action of the looters at small businesses like Edwards’ is having a knock-on effect on micro businesses, like a food outlet that Bernice Maulon operates on Kennedy Avenue.

The stretch of road is located on the same street as the financial services centre, the main government complex, which is home to the Office of the Prime Minister and a number of government ministries.

In the aftermath of the storm, the building is also the co-ordination hub for the disaster response and Maulon could have been in for a windfall, selling meals to the hundreds of regional and international disaster responders in the country.

“It affected it badly because right now I can’t start my business again, because they loot so much I can’t even get drinks to buy or so, because all businesses are closed,” said Maulon, who sells barbecue, fried chicken, other food items and drinks, to complement her income as an office attendant, told CMC.

She did not put a figure to it, but told CMC that she has lost “a lot” of money since the storm.

“I lost a lot,” said the woman who also told CMC that she is hoping to re-open her business pretty soon.

“As soon as business start to roll, I ready to roll,” said Maulon, who is the mother of two adult children and two adopted children

But restarting his business would not be so straight forward for Edwards.

“As you can see, all of the chillers and so on, got soaked. I am not sure if they can actually work, and the stock, which is my main stuff, was basically total loss… So right now, we are trying to decide how do we bounce back from something like that,” he told CMC.

“It will take some effort. I’m hoping that government provides some assistance; I’m hoping that the bankers go into the consideration of the small businesses,” he added.

“We’re trying to bounce back but a lot of it depends on finance, and we need cheap finance, we need concessionary rates, we need the suppliers to be lenient, because you do credit purchases so you have suppliers you owe. We can bounce back, but we need some assistance,” Edwards told CMC.

Prime Minister Roosevelt Skerrit has already indicated that his administration will be holding talks with the private sector on providing assistance, in a bid to get them quickly back on their feet.

“I expect, with the local business community eager to get back on its feet, very soon normal commercial activity will be restored in Dominica,” Skerrit said in a radio and television broadcast.

He said the rescue phase, following the hurricane, is now “sufficiently effective and mature”, allowing now for the next part of the journey, which he described as “the social and economic recovery of Dominica”.

Skerrit said he was pleased with the enthusiasm shown by the national and regional private sector to get things “rolling again”, noting “many have contributed generously to our rescue efforts and now we look forward to them lending of their expert advice and technical capabilities as together…we build back better”.