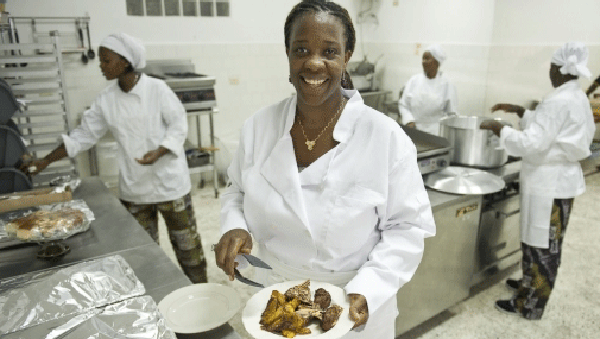 A chef and owner of a restaurant and catering company in Liberia. Photo credit: UN Photo/C. Herwig.

AFRICA, October 7, 2017 (IPS) — A few years ago, more than half a century after the concept was first proposed, the government of Côte d’Ivoire completed construction of the Henri Konan Bédié Bridge, a span over the Ébrié Lagoon, linking the north and south of Abidjan, the country’s main city. The project became a reality after the government received development bank and private capital financing.

Similarly, the Dakar-Diamniado Highway in Senegal, although a public structure, was built and is being operated by private companies. Increasing difficulties in obtaining traditional financing, including bank loans for public infrastructure such as roads, railways and dams are forcing African countries to explore alternative financing approaches.

Having the private sector build and operate infrastructure, recoup its investments and later transfer the infrastructure to governments is one way of compensating for the shortfall in official development assistance and banks’ reluctance to provide loans.

Economic backbone
Aid to the least developed countries (LDCs), most of which are in Africa, fell by 3.9% in 2016, according to the Organisation for Economic Co-operation and Development (OECD), which promotes policies that improve economic and social well-being of rich countries.

At the moment, governments are coming up with innovative financing strategies, while big corporations are relying on investments or bank loans to grow and expand their businesses. However, Africa’s small and medium-size (SMEs) enterprises, still struggle for financing.

Governments that seek financing from private partnerships or international financing institutions such as the African Development Bank (AfDB), the International Finance Corporation (IFC), the World Bank and others often realise that the funding available cannot meet the financial needs of the SMEs.

“In Ghana, SMEs can safely be regarded as the backbone of the economy, employing thousands of people,” Ghana’s minister of finance, Ken Ofori-Atta, said at a gathering of Ghanaian entrepreneurs in June.

SMEs represent 92% of all local businesses in Ghana, providing up to 85% of manufacturing jobs in the country and contributing about 70% to the country’s GDP. In Nigeria, 37 million SMEs employ about 60 million people and account for about 48% of the country’s GDP.

South Africa (the most advanced economy south of the Sahara) is home to more than 2.2 million SMEs, about 1.5 million of them in the informal sector. About 43% of South Africa’s SMEs operate in trade and accommodations, according to South Africa’s Small Enterprise Development Agency (SEDA), which, among other functions, implements the government’s small business strategy.

A 2016 SEDA report says that SMEs face challenges in accessing finance and markets. Yet eight out of 10 jobs and nine out of 10 of all businesses in sub-Saharan Africa are related to small business, according to UN figures.

Potential
SMEs, especially those in the informal sector, have a hard time accessing bank loans. A majority of African SMEs rely on personal savings or start-up capital from friends and family.

“Even when a bank is willing to lend them some money, the collateral and guarantee they require and sometimes the down payment is just too much for a small company like us,” says Alex Treku, the communications and projects manager at the Togo-based LOGOU Concept Togo (LCT).

LCT manufactures a type of electric food mixer (the Foufou Mix) that is used in place of the traditional mortar and pestle and saves women the energy used in pounding yam for fufu, a West African staple dish.

“The Foufou Mix allows for quick and hygienic yam preparation in approximately eight minutes,” the African Innovation Foundation (AIF) said when it named LCT the runner-up for the Innovation Prize for Africa in 2014.

AIF added that “pounding of yam has traditionally been done by women; this innovation provides a solution not currently being contemplated by international manufacturers. It also opens up possibilities for a whole new industry for manufacturing of such appliances on the continent.”

One-third of Nigerians reportedly eat fufu, making the country of 170 million people an attractive market for the gadget. Yet LCT is able to manufacture only about a hundred mixers a month, according to Mr. Treku. The reason? “We don’t have access to bank credit or funds to grow our business,” he says. LTC currently employs 19 people.

Operational capacities and access to markets are other challenges African MSMEs face, but access to financing is the most critical.

Partnership and innovation
On the occasion of the first-ever MSME Day marked globally on 27 June, the AfDB called for an increase in new and affordable financing schemes. Both the AfDB and the IFC would like SMEs to have increased access to financing.

By providing coverage for risks associated with lending to SMEs, an intermediary such as the African Guarantee Fund (AGF) can provide credit guarantee facilities to financial institutions that give loans to enterprises they would normally be reluctant to lend to.

Last June, the AGF announced that through a partnership with the African, Caribbean and Pacific Group of States, the European Union and the UN Development Programme, some 5,000 SMEs in “development minerals” in five countries will have more affordable financing because of AGF’s $12 million credit guarantee.

Two years ago, the IFC and Ecobank, a pan-African commercial and investment banking group, launched a $110 million risk-sharing facility that allows Ecobank to lend money to SMEs operating in fragile and conflict-afflicted states in West and Central Africa. In addition to current efforts by traditional banks to lend to SMEs, experts have urged SMEs in Africa to explore innovative financing, such as cooperative financing and diaspora funds.

The World Bank is said to be exploring other ideas like crowdfunding—an innovative way of financing a project by raising funds from a very large number of people—peer-to-peer lending, social impact bonds and development impact bonds.

But the AfDB wants credit providers to increase lending by at least $135 billion to meet demand by African SMEs. As the overall financing gap in developing countries is currently between $2.1 and $2.6 trillion, new strategies are required to finance the 17 Sustainable Development Goals.

According to the World Economic Forum, “blended finance” could plug this hole. Should these funds become available, the majority of SMEs still operating in the informal sector will have to “take giant steps towards formalisation in order to increase their potential for accessing formal credits,” according to a 17 March study, Financing the Growth of SMEs in Africa: What Are the Constraints to SME Financing within ECOWAS? published in the Review of Development Finance.

The authors of the study maintain that policy reforms are as necessary as available financing. They also suggest requiring companies to provide credit information to boost creditors’ confidence and to make sure that government-sponsored credit schemes are managed efficiently and transparently.

*Africa Renewal is published by the UN’s Department of Public Information.