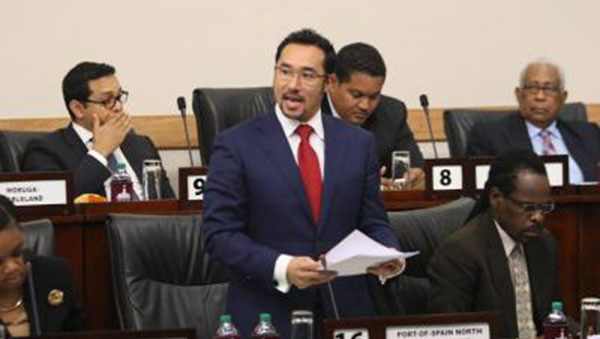 Minister in the Office of the Trinidad and Tobago Attorney General, Stuart Young, seen speaking in parliament, told a news conference, today, that the government would be starting legal action, soon, against former housing minister, Dr. Roodal Moonilal, over allegations of bid-rigging.

PORT OF SPAIN, Trinidad and Tobago, October 16, 2017 (CMC) – The Trinidad and Tobago government, today, said it had filed lawsuits against five contractors who, it said, colluded to defraud the State of over TT$200 million through bid-rigging and contracts with inflated costs, a few years ago.

Minister in the Office of the Attorney General, Stuart Young, told a news conference that the government would also be starting legal action, soon, against former housing minister, Dr. Roodal Moonilal, over allegations of bid-rigging, with respect to at least 10 contracts through the Estate Management and Business Development Company (EMBD) in 2015.

“What we found was that the work, which they claimed to have been done and they had been paid for doing, was not performed. We have, over a period of 18 months, done serious analysis of the various work sites and found that work was either not done or the quality of the work was such a low quality, the value of the work could not have been certified,” Young said.

He said certain EMBD employers had also participated in the payment of the funds by “just certifying payment without checking to see whether the work was done”.

Young said that the state’s action will include claims against former EMBD Chief Executive Officer, Gary Parmassar, who was, in 2016, among officials of that company sent on administrative leave, pending a financial audit into the awarding of TT$400 million worth of contracts, through the state-owned company.

Young said the Government’s “best in school” forensic team had found evidence of collusion, mostly via text messages, among Moonilal, the contractors and the EMBD official.

“The evidence that we have uncovered includes a series of text messages being exchanged between Mr. Parmassar as the CEO, Dr. Roodal Moonilal, TN Ramnath …,” adding “these text messages are very, very damning and damaging, and even contain evidence of the then former minister, Dr. Roodal Moonilal, instructing who contracts should be awarded to, how much money should be paid to these contractors and, on occasions, he has even indicated …to bring the cheques made payable to the contractors to him, Roodal Moonilal”.

Moonilal has not yet publicly responded to the latest allegations, but in the past, has denied accusations made by the Rowley administration that came to office following the September 2015 general election.