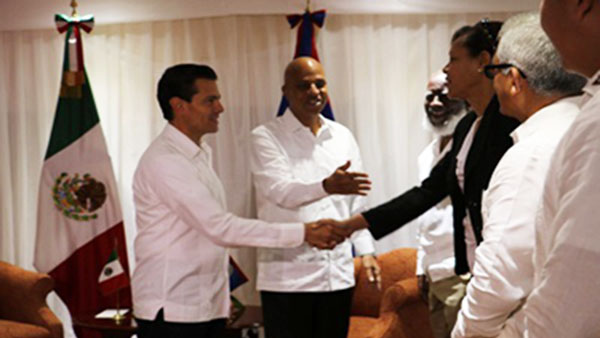 Belize Prime Minister, Dean Barrow, introduces a member of his delegation to the President of Mexico, Enrique Peña Nieto.

CARICOM-Mexico Summit Opens Against Background Of Effects Of Climate Change

BELMOPAN, Belize, October 25, 2017 (CMC) – The fourth Caribbean Community (CARICOM)-Mexico Summit began, here, today, with the Caribbean, underscoring the importance of the relationship it shares with its Central American partner for nearly half a century.

CARICOM Chairman and Grenada’s Prime Minister, Dr. Keith Mitchell, said that the region was looking forward to deepening that relationship, given the changing global environment and the impact the recent hurricanes were having on the socio-economic development of the Caribbean.

He noted, CARICOM, like Mexico, which suffered two earthquakes, resulting in the deaths of several people, were not immune from natural disasters, adding that “climate change is real.

“All scientific evidence points to an increase in frequency of these monstrous storms. This is a new normal for climate events …in our Caribbean area.”

“The Caribbean has been designated the most disaster-prone region in the world. This poses a serious and recurrent threat, year after year. It is our reality today, not some far away possibilities, and therefore it requires urgent and effective action,” Mitchell told the opening ceremony.

He added that CARICOM and the United Nations would be co-hosting a high-level donor conference, on November 21, in New York, to assist the countries, ravaged by the hurricanes, followed by a retreat in Grenada, December 4-6,with the international private sector and co-hosted by the businessman, Richard Branson.

“We would welcome the participation of Mexico,” Mitchell said, adding that “CARICOM greatly values the close and friendly relationship that we have forged with Mexico”.

“Your country was the first to form a joint commission with the Community signed in Kingston, Jamaica, on the 30th July 1974 (and) since then, we have built a solid relationship in cultural, political and economic realms,” he said, adding that Mexico has demonstrated its commitment to the sustainable development of the Caribbean region.

A government statement, issued here, ahead of the summit, noted that the leaders would “consider the state of play of the dynamic relationship between CARICOM and Mexico, which includes the CARICOM-Mexico program of technical cooperation, infrastructural development in the region, funded through the Mesoamerica Project, Agriculture, and Trade and Investment.

“Also on the agenda is cooperation in the multilateral fora, which spans areas of mutual concern, such as the implementation of the 2030 Agenda for Sustainable Development, Climate Change, and Non-Communicable Diseases,” the statement noted.

It further said that in addition to the Summit’s “confirmation and consolidation” of the strong relationship between the two sides, the inclusion of disaster management and recovery on the agenda is of particular relevance to CARICOM, following the devastation caused to several Caribbean islands by Hurricanes Irma and Maria when they passed through the Lesser Antilles, last month, killing scores of people and causing billions of dollars in damage.

In his address, the host Prime Minister, Dean Barrow, noted that both Mexico and Belize face territorial challenges to their borders and the closeness of the two countries gives rise to many challenges.

“Every day we face specific threats to our security and our peaceful way of life from organised and trans-border crime and, every day, we face obstacles from epidemics, economic shocks, climate change and the resultant natural and man-made disasters we have just been painful witness to and victims of,” he noted.

Barrow said that because all these problems are region wide, and indeed global, “CARICOM suffers the same effects as Belize and Mexico though not being part of the same geographic inter connections…”

CARICOM Secretary General, Irwin la Rocque, used the occasion to seek Mexico’s support for the Caribbean’s call for concessionary loans to regional countries, following the move by developed countries and the international financial community to graduate them to middle income nations.

“A very significant need in that regard is an urgent change in the criteria for access to concessionary development financing,” he said, adding “this becomes even more urgent given the increase frequency and intensity of natural disasters”.

“The resulting high levels of recurring reconstruction require major injections of additional financing. The repeated costs of the recovery in the aftermath of successive natural disasters add to the debt list,” he said, pointing out that many CARICOM countries are classified as middle-income countries and are graduated out of access to these concessionary loans and financing development.

“The criteria must be changed to take into account the economic and environmental vulnerability of states,” the CARICOM Secretary General added.