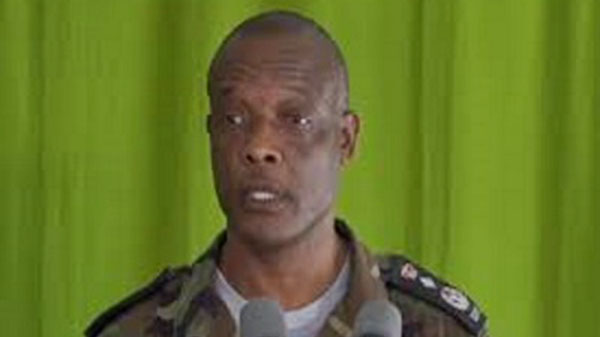 ROSEAU, Dominica, October 25, 2017 (CMC) – The police force, today, reiterated a warning to citizens, who break the curfew, imposed on the island following the passage of Hurricane Maria, last month, revealing that there would be an increase in law enforcement officials in the capital to “prevent any possibility of lawlessness”.

Acting Police Commissioner, Davidson Valerie, speaking at the daily news briefing on the progress being made, following the passage of the Category 5 storm, on September 18, said that 102 people have been arrested for breaking the curfew and will be prosecuted.

He said, on conviction, a person risks facing a fine of up to EC$5,000 and up to six months in jail.

“It is a fine and confinement,” Valerie said.

Yesterday, the Ministry of Justice, Immigration and National Security said that, based on the advice of the Chief of Police, the curfew hours had now been changed to 10.00 pm to 5.00 am, instead of the previous 6.00 pm to 6.00am (local time).

It said that the change, which goes into effect immediately, is “to facilitate economic activity.

“It is further advised that the curfew remains in force in the city of Roseau, to extend to the Loubiere Bridge in the south, Checkhall Bridge in the north and Copthall in the east to maintain and enhance security.

“The city of Roseau is returning to a state of normalcy and security in the city is becoming more stable. There is, however, still a need for enhanced security and vigilance. All citizens are advised to comply with the curfew hours as stated,” the government said, after it had, earlier this month, announced a relaxation of the curfew in outlying areas.

“There is no reason why the police should find you outside after 10.00 pm and before 5.00 am,” Valerie said, urging persons to obtain the necessary pass from the authorities.

But he also cautioned that obtaining a pass would not prevent the police from searching anyone.

“The police have their duty to do, despite you having a pass in your possession,” he said, noting that given the fine and confinement attached to the crime, “this is not what someone would want to face after a hurricane”.

Valerie also disclosed that law enforcement authorities have recovered several items, looted by persons, following the hurricane, and urged those still in possession of stolen items to bring them to the nearest police station.

He warned, however, that this would not necessarily mean that no criminal charge would be laid against that person, insisting “we will carry out our investigations and if charges are to be laid, they will be”.

The acting top cop praised the members of the Regional Security System (RSS), who are here assisting with keeping law and order, adding that local police officers have been working three and four shifts, daily, and are under severe stress.

In addition, he said, 11 of the 19 police stations across the island, had been badly damaged and, in some instance, uninhabitable. “It is a difficult time for the police”.

The storm killed at least 28 people and left billions of dollars in damage, when it made its way through Dominica, last month.