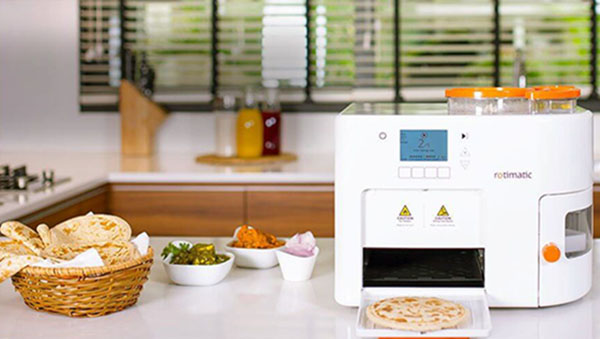 CANADA, October 25, 2017 — Imagine a robot capable of making roti in a fraction of the time it takes a person.

After a successful run in Singapore and the United States, Rotimatic — manufactured and marketed by Zimplistic Inventions Pte. Ltd. — was launched, earlier this month, in Canada, where consumers will be able to purchase fully-automated flatbread-making robots, online.

(The Internet of Things (IoT) is a system of interrelated computing devices, mechanical and digital machines, objects, animals or people that are provided with unique identifiers and the ability to transfer data over a network, without requiring human-to-human or human-to-computer interaction.)

A multifunctional appliance, the Rotimatic is capable of making rotis, variants of traditional roti, including masala roti, puri roti and spinach onion roti.

Soon, other flatbreads such as tortillas, pizza crusts, gluten free flatbreads and more will be available on the same device, through an automated software update, making Rotimatic one of the most futuristic inventions in the kitchen appliances category.

“Eating healthy and staying fit have always been a priority for me, but following a healthy diet can be challenging and time consuming,” says Nagarkar, co-founder and CTO of Zimplistic Inventions Pte. Ltd.

“I wanted to solve this problem and empower people to make their own, heathy flatbread at home, that’s when the idea of Rotimatic was born,” she added.

Israni, co-founder and CEO of Zimplistic Inventions Pte. Ltd., developed the software capabilities of Rotimatic, with the vision of making it the smartest kitchen device on the market.

Its IoT capabilities allow engineers to remotely diagnose and troubleshoot issues. The Rotimatic Companion App, which is currently used to provide customer support, will soon act as a chef’s assistant, allowing users to turn on and automatically update the device and download new recipes, all from their phones.

“Our goal was to invent a product that would take away the hassle of making flatbread,” says Israni. “The Rotimatic is the only kitchen appliance to use IoT and AI, making the entire experience easy for users,” he adds.

Priced at US$999, Rotimatic is now available in the U.S., Singapore, the U.K., Australia, New Zealand and Canada.

Founded in 2008, Zimplistic is a new age kitchen robotics startup company, that claims to be driven by the mission to make healthy eating easy, with the vision of seamlessly integrating consumer robotics with IoT, helping families make healthy homemade meals with just the touch of a button.