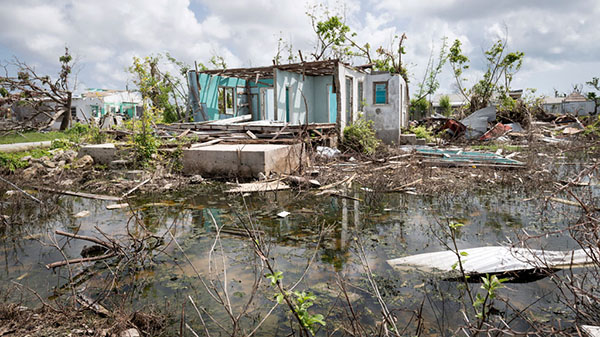 Scene from Codrington town in Barbuda during the UN Secretary-General’s visit to survey the damage caused by recent hurricanes. UN photo/Rick Bajornas.

UNITED NATIONS, New York October 25, 2017 (CMC) – The United Nations has called on the international community to assist Caribbean countries, devastated by recent hurricanes, so they can “build back better”.

It is also calling for more action, at all levels, to manage disaster and climate risk, and to prepare for future extreme weather events.

Several Caribbean countries, including Antigua and Barbuda, Dominica, Anguilla, the British Virgin Islands, Turks and Caicos Islands, as well as St. Martin, Puerto Rico and the United States Virgin Islands, were devastated as Hurricanes Irma and Maria, category 5 storms, made their way through the Lesser Antilles, last month, killing scores of people and leaving damage estimated at billions of dollars.

On Tuesday, the UN’s Economic and Social Council (ECOSOC) organized a special meeting on the “Aftermath of recent hurricanes: Achieving a risk-informed and resilient 2030 Agenda” to discuss the current situation along with the economic, social and environmental impacts on those affected.

“These disasters led to tragic loss of lives, displaced people, damaged infrastructure and homes, and disrupted livelihoods in both developed and developing countries,” said Marie Chatardová, ECOSOC President, in her opening remarks. 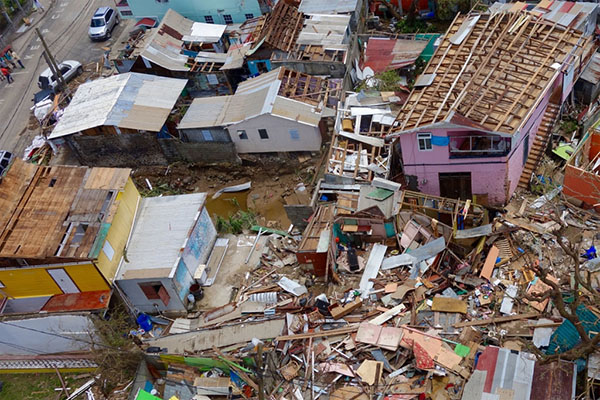 Destruction left behind in the aftermath of Hurricane Maria on the island of Dominica. Photo: Ben Parker/IRIN.

“We have seen how inequalities exacerbated people’s exposure to the impact of disaster,” she said, noting how easily development gains can be erased if a risk-informed, resilient 2030 Agenda is not pursued.

Deputy Secretary-General, Amina Mohammed, said “the international community has a responsibility to support affected countries to become more resilient; to promote a risk-informed approach to reconstruction; and to strengthen their financial systems so that they can cope with such large-scale shocks”.

She recalled UN Secretary-General António Guterres’ visit to the hurricane-devastated Caribbean, earlier this month, and his strong appeal, not only for humanitarian aid but also for new mechanisms for building resilience.

“Investing in disaster-resilient infrastructure and housing pays off, over the long term, by reducing economic losses and loss of life. We must harness the power of technology, innovation and partnerships to move towards a green, clean, sustainable energy future,” she said.

Mohammed outlined a three-fold aim to meet immediate needs, put new concessionary financing arrangements into place and design and implement a framework for long-term financing resilience, saying “the Secretary-General looks forward to determined follow-up action by the Council to ensure strong progress on the ground.”

UN General Assembly President, Miroslav Lajčák, said that the response must “match the magnitude and urgency of the situation”.

ECOSOC Vice-President and St. Vincent and the Grenadines’ Permanent Representative to the UN, Inga Rhonda King, said that all member states have committed to developing and implementing holistic disaster risk management at all levels, in line with the Sendai Framework.

“It is now time for action to turn these commitments into reality for all,” she said. 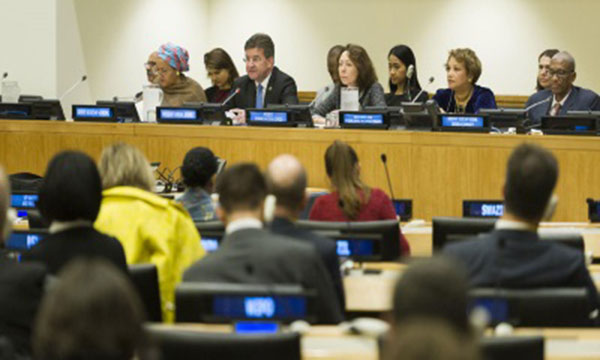 Meantime, the Economic Commission for Latin America and the Caribbean (ECLAC) said that the criteria for access to concessional financing must change to support Caribbean countries with their reconstruction.

ECLAC’s debt relief proposal for the countries most affected by recent hurricanes, was presented by Alicia Bárcena, the organization’s Executive Secretary.

Bárcena told the meeting that in the last six months, Caribbean island states have suffered the consequences of “the worst hurricane season this century”.

She noted that there were more than 102 deaths, adding that some countries were severely ravaged, such as Barbuda, Anguilla, St. Martin, Dominica, Cuba and Puerto Rico.

Bárcena spoke of the “great vulnerabilities that Caribbean countries face, both economic and environmental, stemming from their small size and their degree of exposure to external influences beyond their control”.

In addition, she noted the region’s “fragile fiscal situation,” stating that, on average, the region’s debt levels exceed 70 percent of their Gross Domestic Product (GDP).

“Despite these vulnerabilities, which are compounded by the fact that 70 percent of the population lives in coastal areas, lying just 10 meters above sea level, the majority of Caribbean nations are classified as ‘middle-income countries’, which complicates their access to financing for development,” Bárcena said.

“It is urgent that the criteria be changed for obtaining concessionary funds that can help in the reconstruction of their economies,” she added.

During the meeting, ECLAC’s most senior representative recalled the organization’s proposal, presented some months ago, to ease the Caribbean’s debt burden, which currently amounts to US$52 billion dollars.

ECLAC said this initiative was “widely embraced” by other members of the panel, as well as by the countries’ representatives who participated in the debate.

Bárcena said the proposal calls for creating a resilience fund for climate change adaptation that involves the use of resources from the Green Climate Fund to finance projects.

“We have identified a portfolio of adaptation projects that can be executed with these resources; but, for that to happen, it is fundamental that countries have access to concessional financing, despite being categorized as middle income nations.

“This initiative has already been presented to the World Bank, the International Monetary Fund (IMF) and to other bodies, and we believe that the resilience fund must be managed by institutions such as the Caribbean Development Bank, or the Inter-American Development Bank (IDB), or the Green Climate Fund, among others,” she added.

“We cannot continue asphyxiating the Caribbean, regarding access to the resources that it needs. The financing problem must be addressed, collectively, by the international community,” Bárcena said, insisting that the UN’s 2030 Agenda is “precisely the best tool available to ensure this issue remains a priority in global forums”.

“The Caribbean needs long-term, low-cost financing to achieve the various SDG [Sustainable Development Goals] goals, but the fiscal space has narrowed, considerably, given the high cost of public debt servicing,” she added, stating that the voluntary national reports on follow-up to the Agenda that several Caribbean countries are presenting, are proof of their ability to adapt to the goals of sustainable development.

“The Caribbean must remain a top priority at a regional and global level,” Bárcena said, indicating that ECLAC is already working with several Caribbean countries on evaluating the damage caused by the latest hurricanes, utilizing its “Damage and Loss Assessment (DALA)” methodology.