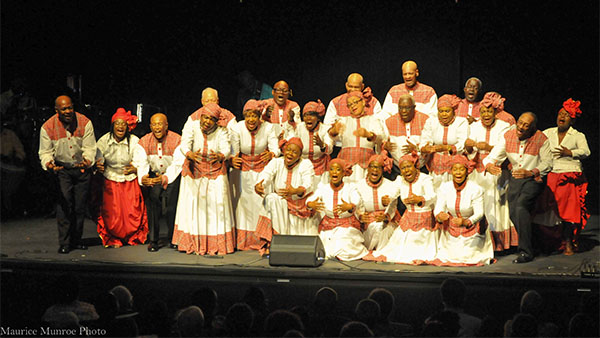 The venerable Heritage Singers (Canada) -- longevity personified -- performed some of their best renditions of African and Caribbean folk culture, as they joyously celebrated the group's 40th anniversary, on Saturday, October 21. Photo by Maurice Munroe.

Saturday night-before-the last, at the Toronto Centre for The Arts, we were among the hundreds, who bore witness to the Heritage Singers (Canada) celebrating their 40th anniversary, strolling down memory lane and reflecting on their journey throughout their colourful and storied existence.

What a Saturday night it was indeed, as the venerable Singers delivered their best performances in song, dance and drama.

The audience was so engaged in the group’s melodious renditions and re-enactments of special events and ceremonies in the homeland, that there was no hesitation in toe tapping, hand clapping, singing and loud laughter, amidst the enjoyment of Jamaican Patois.

The program commenced with a scene of friends enjoying time together, on Christmas Eve, singing Christmas and Jamaican folk songs, which formed the introduction to a conversation between a Canadian-born Jamaican lad, Jimmy (played by Kaden Stephen) and his Jamaican Aunty (played by local storyteller, Sandra Whiting), who attempted to educate him on his Jamaican roots. 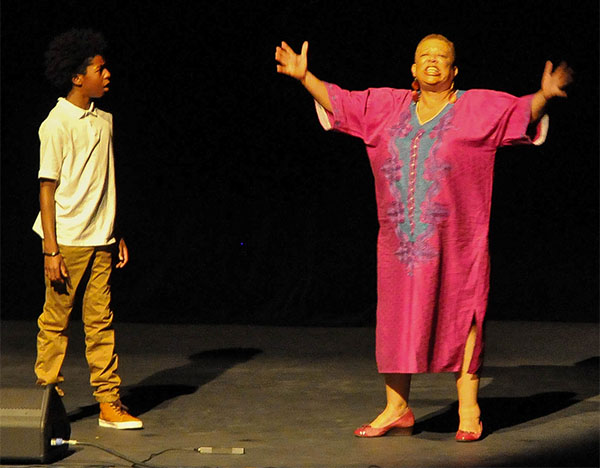 Canadian-born Jamaican lad, Jimmy, played by Kaden Stephen, listens attentively — and appears in awe — as his Jamaican Aunty, played by local storyteller, Sandra Whiting, attempts to educate him — demonstrably — on “Miss Lou and his Jamaican roots. Photo by Maurice Munroe.

She ensured that Jimmy was taught about the well-loved Jamaican icon, and once patron of the Heritage Singers, Dr. Louise Bennett-Coverley, affectionately known as “Miss Lou”, who played an important role in preserving Jamaica’s dialect, ‘Jamaican Creole’(commonly known as Patois) and uplifting it to level of respectability.

This 40-year walk down memory lane, included a scene with a “Granny” who, in preparing to send her grand-daughter to Canada, consulted a spiritualist, “Maddah”, for assurance that the young migrating woman would be safe, while overseas. The consultation culminated with the attendance at a Pukumina/Revival Meeting to ensure that the young woman received a blessing. 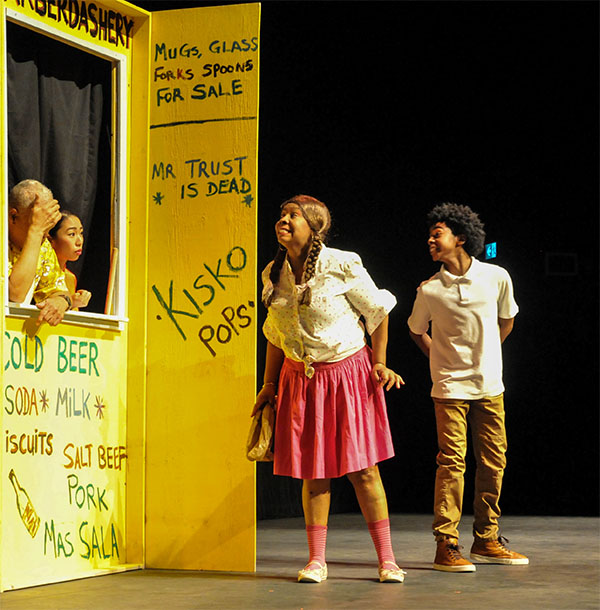 A scene from one of the skits performed during the entertaining show. Photo by Maurice Munroe.

The night’s program also included an introduction to Hakka music – solo by Lloyd Chung who melodiously sang “Song Bie” (bidding farewell) in tribute to the Jamaican-Chinese culture; and a mandarin song, “Mei Hua”, in a tribute to Taiwan, which was sung by two Taiwanese guest singers, accompanied by the Heritage Singers.

The veteran group voted Taiwan to be the venue of their most enjoyable overseas performance.

Prior to the commencement of each performance, and throughout this entire walk, the audience was shepherded by the guest-participant/emcee, Jamaica’s renowned performer, Joan-Andrea Hutchinson, who adeptly solicited hilarious audience participation, as she narrated the various aspects of each performance. 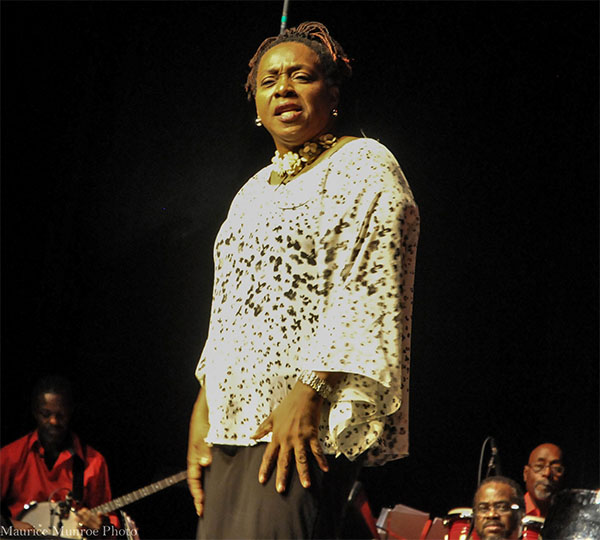 Her remarkable communication skills and expert use of humour, instilled a feeling of being back in the Caribbean enjoying the moments.

The diversity of colourful costumes added more fun and excitement to the performances, which were clearly enjoyed by all.

The Heritage Singers were birthed in 1977 by Founder and Musical Director, Grace Carter-Henry Lyons, when a group of friends, who kept meeting periodically to sing, was asked to perform at Harbourfront, after their first Christmas Eve get-together in 1976. 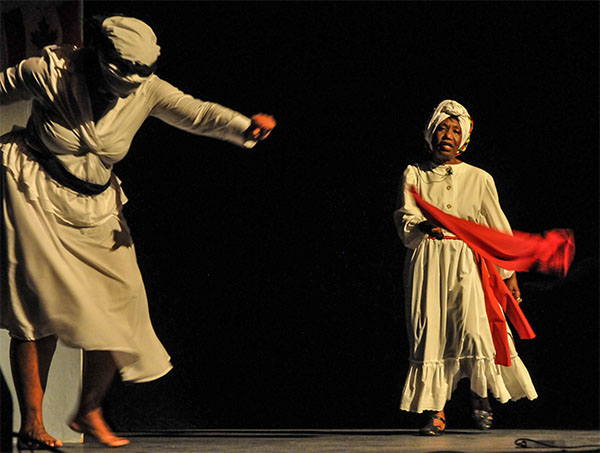 As friends living in a new country, they felt the need to reflect on their cultural background, through music and song.

At the time, it was obvious that while there were many organizations that perpetuated Caribbean culture throughout the community, there was a need for expressions of culture in the form of classic folk music.

Carter-Henry Lyons, then a former member of the Jamaica Folk Singers, under the leadership of The Late Mrs. Olive Lewin, having had the musical skills and the gift of harmonizing, took up the challenge be the group’s Musical Director.

The Heritage Singers have since been promoting the Jamaican cultural expression throughout Canada, the United States, Europe and the Caribbean.

They must be commended for their sterling efforts in keeping, not only Jamaican culture alive in Canada, but also the Caribbean and African cultures. They must also be commended for allowing us all, through their performances, to recognize and remember the Chinese influence in the Caribbean, when they first arrived as indentured servants, and served as shop-keepers, who afforded our fore-parents an opportunity to utilize the then-system of credit. This is indeed a part of our Caribbean history.

The audience was treated to a short sample of the contents of a soon-to-be-released documentary on Dr. Louise Bennett-Coverley, and roared with excitement.

It is interesting to note that most of the Singers fall into the ‘baby boomer category, as we do. So many of our Caribbean cultural organizations are experiencing enormous challenges to inspire young talent to continue the traditions we hold dear.

Never-the-less, we are hopeful that the Heritage Singers would not have to share these experiences, but if they do, they would be able to overcome them with the merriment and vigor that exudes their performances.

After experiencing the laughter, education, enjoyment and pure magic of the Heritage Singers’ scintillating and stunning performances, we hope that the group continues its preservation and promotion of the Caribbean and African culture and folklore, far into the future. 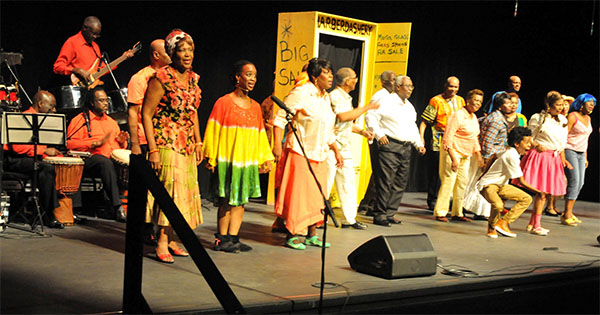 And if the group does persist beyond the big four “O”, current and future generations can, expectantly, as the late “Miss Lou” once said, “… know that we can all look forward to a cultural feast of folklore in song, dance, and true Caribbean traditions.”

Congratulations Heritage Singers on your 40th anniversary — and beyond!