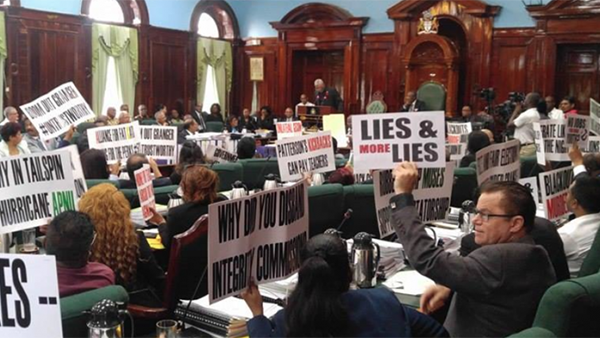 Waving placards with slogans such as “free and fair elections”, “no more rigging” and “not fit and proper” as they sat in Parliament, the opposition legislators heckled President David Granger, as he made his presentation.

But despite the protests, the President continued with his address, in which he outlined the government’s broad economic plan and legislative agenda for the future, while also focusing on achievements over the last year.

He also made reference to various government sectors and international issues related to Guyana, including the border controversy with Venezuela.

“Despite the lawlessness, the government will continue to push ahead with its development plan,” Granger told Parliament.

Meanwhile, in responding to criticisms of his appointment as the Chairman of GECOM, Patterson, today, brushed aside reproaches that have sought to downplay his ability to perform effectively in the post.

He told reporters that he was not bothered by the criticisms.

In an effort to clarify his own position, Patterson said he believes the president received proper advice in his decision to appoint him as Chairman of the Elections Commission.

However, he declined to comment further, on the constitutionality of his appointment, but used the opportunity to distance himself from being a member of any political party.

Patterson has been accused of being a member of the People’s National Congress, which forms part of the governing coalition, but he believes this is because he was a pallbearer for the remains of former President Desmond Hoyte.

Turning his attention to concerns over his appointment as Chief Justice of Grenada, Patterson maintained that he once served as the acting Chief Justice.

But the PPP has been claiming that Patterson never served as the Chief Justice in Grenada and they have accused him of lying on his curriculum vitae.

“I have not done a resumé in 40 years and I omitted acting. If that’s the source of their bother that’s no concern of mine,” he added.

The new GECOM chair said he is settling in the post and is working with a “good team”.