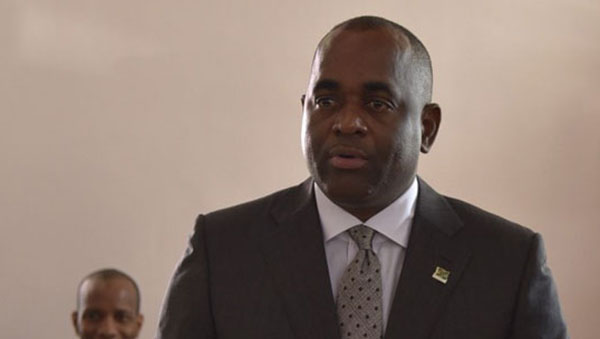 ROSEAU, Dominica, November 3, 2017 (CMC) – Hurricane-battered Dominica is celebrating 39 years of political independence from Britain, today, with Prime Minister, Roosevelt Skerrit, urging citizens not to be daunted by the task of rebuilding the island.

Hurricane Maria hit Dominica, on September 18, as a Category 5 storm, killing at least 28 people and leaving billions of dollars in damage.

Unlike previous years when nationals were honoured for their contribution to the socio-economic development of the island, this year’s national awards ceremony has been postponed to next year.

In his address to the nation, marking the independence celebrations, Skerrit said that Dominica ‘is still standing” despite facing the “fiercest floods, the most ferocious winds.

“We, the children of Dominica, have shown the world that disaster is finite; but, hope is infinite! Maria stole everything money can buy, everything you can put a price on; but left what you cannot… that which is priceless! We will determine the value of those things through our actions in coming days and weeks. A moment comes, but rarely in history, when a nation’s soul is revealed.”

He told the Independence Day Rally, at the Windsor Park Stadium, attended by thousands of people, that how the island responds to the storm “will define us, will make us, will become us.

“In this solemn moment, let us all, Dominicans who reside here or abroad, let us chose, today, to renew our pledge to the service of Dominica, her people and to all humanity. Let us, together, renew our pledge to fight poverty and ignorance; build a prosperous, progressive nation; and to invest in institutions that safeguard justice and opportunity for all.

“Our nation’s doubters will say what is the point of such a small country having such high ambition at such a low time like this? We say that the measure of the greatness of a nation is not its size or what it aims for in comfort, but what it strives for in crisis,” the Prime Minister added.

Skerrit said that the day following the hurricane, he witnessed “total destruction”, adding “I saw corrugated iron mangled and tossed aside, with everything else, as if we had been ransacked by a giant burglar.

“I sensed uncertainty spiralling. I smelled fear. I also breathed in the deep indefatigable determination of the vast majority of our people to carry on and stand up. When faced with grave danger, humans have evolved an instinct to fight or flee. We chose to fight! We chose to rise.”

He said he is confident that people, who would have fled the island after the storm as they did in 1979 when Dominica was hit by Hurricane David, would soon return.

“Sometimes it takes a crisis to remind everyone of the importance of our journey. Remember, you only see the stars, clearly, at the darkest hour. Ladies and gentlemen, on this, our Independence Day, Dominica stands forth on the edge of a great triumph to come, on the edge of a triumph not just for Dominica but for the world.

“The disaster visited upon us has shown, in so many ways, how we are not an island onto ourselves. We are not an isolated fragment of humanity floating in the Caribbean Sea. Humanity is tightly knit. The industrialisation of others warmed the seas and brought hell and fury down upon us but we will not be helpless victims of this world,” he stated.

“It will be a measure of the maturity of our independence, of its meaningfulness, if we are brave enough and wise enough to accept that the challenge of our time is global warming and climate change. We must therefore grasp the opportunity to make a difference to the world, to shine a light onto the right path for our planet.

“We do not lightly choose to rebuild better or to build the first climate resilient nation in the Anthropocene. The message has found us. We understand the task. We shall rebuild so as to bring a new hope into being for humanity. We must. We will. Our tryst with humanity’s destiny is not a chance thing,” Sherrit said.

But he also acknowledged that the task before the island is “formidable,” adding “we have lost an estimated 200 percent of our GDP (gross domestic product) and our goal is to rebuild better, not just to replace what was lost.

“We must use the opportunity to move, quickly, to 100 percent resilient and renewable energy. We must rebuild almost all of our schools and clinics in a smart, climate-resilient way. We must build new roads, bridges, and put in place slope interventions. We must coordinate our rebuilding so that our cables run underground, alongside this new infrastructure.”

Skerrit outlined new plans for the re-development of the island, saying there are moves to establish the Climate Resilient Economic Agency of Dominica (CREAD) to support the rapid implementation of the plans, once they are funded.

He said following his visit to the United States, London and Brussels, over the last few weeks, over 50 percent of the funding needed to rebuild the island had been forthcoming and that “we will be presenting our plans to a partners conference in New York, later in the month, to help raise part of the rest. We will support the private sector as it rebuilds and restores.

“We will facilitate insurance pay-outs, the importation of rebuilding materials, the forbearance of lenders, and clamp down on price gouging. For the balance of the resources, we are pursuing innovative financial instruments that link the restoration of the rain forests and protection of our marine environment to new resources for rebuilding.

“It will require careful, thoughtful, strategic planning, carried out at lightning speed, because we do not have the luxury of time. It will take unity of purpose. It will take courage, it will take fearlessness. It will take incessant striving. It will take every single Dominican to join the fight to feel its fierce urgency. It will also require a resoluteness of character. This is no time for ill-will. No time for petty and destructive criticism.”