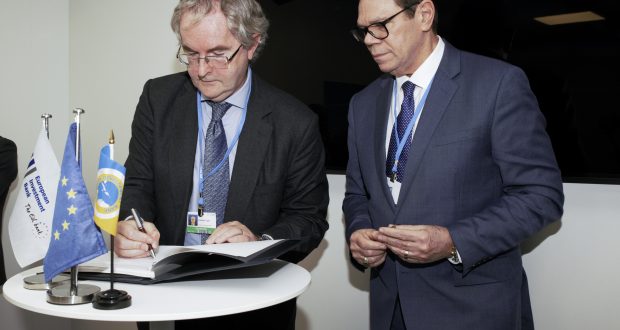 Mitchell, who is also Chairman of the Caribbean Development Bank (CDB), was speaking in Germany on the new initiative between the European Investment Bank (EIB) and the CDB.

The arrangement will support investments for infrastructure reconstruction projects, in the Caribbean in the wake of the recent hurricanes.

“We welcome the support from our partners in the international community, and today, we particularly want to thank the European Investment Bank for the support it has provided over the years to the Caribbean Development Bank, to assist its borrowing member countries in addressing the challenges of climate change,” Mitchell said in the EIB/CDB Event on the margins of COP23.

“We welcome this support and the opportunity it provides to promote sustainable development and the use of low-carbon technologies in the pursuit of the goal of climate adaptation and to improve energy efficiency and to expand the use of renewable energy.”

The new US$24 million financing package is an addition to the US$120 million Climate Action Framework Loan II, signed in May this year, and which remains the EIB’s biggest loan to the Caribbean.

“We see the need to re-examine our sovereign debt regime in light of these natural disasters, which create additional debt burdens and more fiscal and economic trauma,” Mitchell said.

“We also see the need to re-examine our regional resilience infrastructure like our insurance facilities; risk management mechanisms; and access to innovative sources of finance,” he added.

Eligible investments under the new loan will include infrastructure reconstruction, with a focus on “building back better” and integrating climate risk and vulnerability assessments into the projects.

As well as infrastructure, financing to communities for low-carbon and climate-resilience measures such as improved water resource management are also foreseen.

“In response to the devastation caused by hurricanes in the region in recent weeks, the EIB and CDB rapidly agreed to commit additional resources to support reconstruction investment projects in the Caribbean,” said Taylor.

“We stand committed to developing our fruitful 40 year partnership with CDB, to support climate-resilient projects in the Caribbean and to help to adequately tackle the challenges related to climate change,” he added.

According to Smith, “The 2017 hurricane season was one of the most devastating the Caribbean has ever experienced, and underscored the urgent need for investment in climate-resilient infrastructure in our region. The signing of this agreement is another milestone in our longstanding partnership with EIB, and will facilitate CDB’s increased support for resilient reconstruction in the Caribbean.”

To date, the CDB has committed all of the resources under the first Climate Action Line of Credit – USD 65.6 million – for seven projects. This co-financing is associated with total project financing of US$191 million.

Since CDB’s Climate Resilience Strategy was approved in 2012, 58 percent of projects financed have included climate change adaptation and/or mitigation elements in the climate-sensitive sectors of water, education, agriculture, and physical infrastructure such as sea defences, drainage and roads.