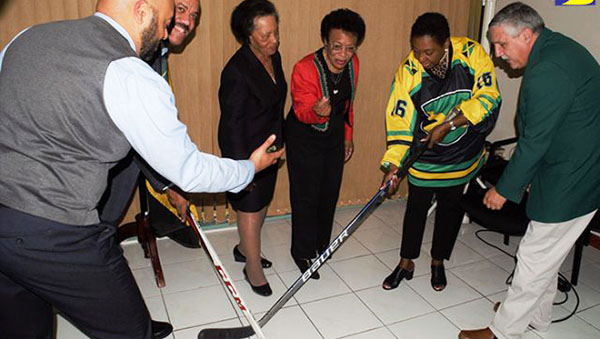 KINGSTON, Jamaica, December 4, 2017 — Olivia Grange, Jamaica’s Minister of Culture, Gender, Entertainment and Sport says she is very excited by the prospect of an ice arena being established in Jamaica, for the sport of ice hockey to be played locally.

Minister Grange met, last Friday, with a group comprised of representatives from the Jamaica Olympic Ice Hockey Federation and from the firm, Tropical Ice Ventures, of Canada, which is a leader in refrigeration technology.

Jason Swales, CEO of Tropical Ice Ventures, told Minister Grange that already he had identified an investor in Canada, who is interested in investing in building an ice arena, along with a hotel, in Jamaica.

Swales said also that “teams are lining up to play ice hockey in Jamaica and there are hundreds of spectators from overseas, who would visit Jamaica, to attend ice hockey matches”.

Grange said beachfront land in Trelawny is what she has in mind for the establishment of the ice rink and the other attractions that would go along with it. She added that the Ministry intended to engage the Urban Development Corporation (UDC), which own the lands.