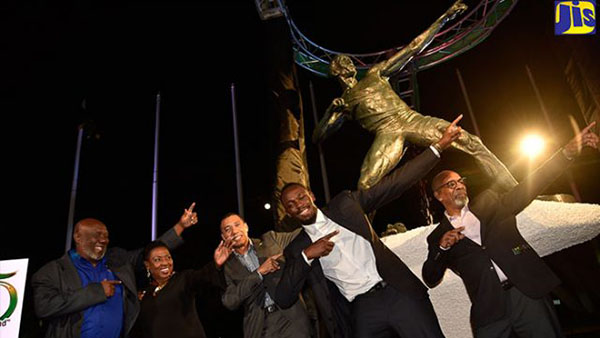 Prime Minister, Andrew Holness (centre), and retired track star, Usain Bolt (second right), lead in showing off the athlete’s trademark ‘To the World,’ pose, at the unveiling of the eight-foot statue in Bolt’s likeness at the National Stadium in St. Andrew on December 3. Others (from left) are Bolt’s long-time coach and mentor, Glen Mills; Minister of Culture, Gender, Entertainment, and Sport, Olivia Grange; and sculptor, Basil Watson. Photo credit: Donald De La Haye.

“The country owes you a lot because your personal achievements have helped to cement brand Jamaica as one of the top-ten brands in the world,” he told Bolt.

Holness was delivering the keynote address at the unveiling of a statue, in Bolt’s likeness, at the National Stadium in St. Andrew on Sunday (December 3). The eight-foot, bronze statute, created by celebrated sculptor, Basil Watson, shows Bolt in his popular ‘To the World’ pose.

Holness said that the retired athlete exemplified integrity in his quest for stardom, and many generations will look at the statue, which is located at the front of the stadium, and feel inspired.

“He has shown the best of mankind – that we can achieve by hard work, dedication, commitment, and we don’t need to use anything to enhance our God-given talent. I admire that about you Usain,” the PM told the large gathering.

He added that Bolt’s example of honesty in sport, integrity, hard work and commitment to a task are qualities that young people should emulate in their pursuit of success.

“You are a true ambassador to young people,” Holness told the retired sprint legend, noting that the athlete was humble in his winnings and respectful of his competitors. “That is an example for the world to emulate,” he added.

Meanwhile, Holness said that the government is working on plans to make a “significant” investment in the improvement of facilities at the National Stadium, so that it can become a world-class facility, capable of hosting major track and field competitions.

Bolt is an eight-time Olympic gold medallist and 11-time World Champion. He holds the world records for the 100-metres at 9.58 seconds and 200-metres at 19.19 seconds, both of which he achieved at the 2009 Berlin World Championships in Athletics.

Other speakers at the event included Minister of Culture, Gender, Entertainment, and Sport, Olivia Grange; Leader of the Opposition, Dr. Peter Phillips; and several heads of sporting bodies.

In his response, Bolt said growing up in his rural community in the parish of Trelawny, he never thought of receiving such honour, and “this is why I always encourage everybody that anything is possible”.

He also heaped praises on his long-time coach, Glen Mills, for motivating him, and support from his family and management team.