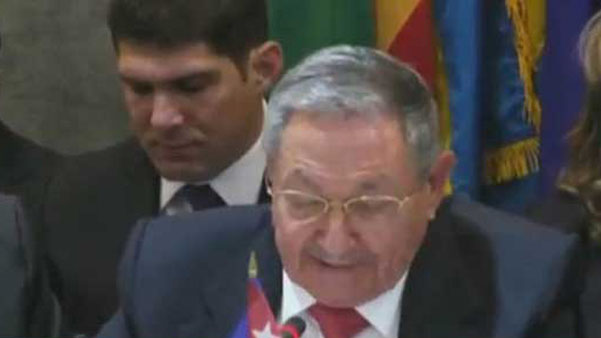 ST. JOHN’S, Antigua and Barbuda, December 8, 2017 (CMC) – Caribbean Community (CARICOM) leaders and Cuba opened their sixth summit, here, today, pledging to solidify their own growing relations, and calling on the United States to remove the decades-old trade and economic embargo against the with Spanish-speaking Caribbean country.

Cuban President, Raul Castro, told the conference that Havana would never forget the role played by Trinidad and Tobago, Barbados, Guyana and Jamaica, 45 years ago, when these Caribbean countries established diplomatic relations with Cuba, despite pressure from the United States.

“We shall never forget that resolution, for it was a fundamental step in breaking the diplomatic and economic siege, led around Cuba, and at the same time it enabled the strengthening of our people… brought together by centuries of shared culture and neighbourhood,” said Castro, who is making his first visit to Antigua and Barbuda.

“We will never forget your constant support for the resolutions against the blockade of Cuba, not the numerous statements of solidarity made during the general debates of the United Nations General Assembly and other international forums.

“That support is especially relevant in light of the regression costs by the actions of the new United States administration against Cuba.”

Castro said the blockade “remains the main obstacle to the social and economic development of our country and to Cuba’s economic, commercial and financial relations with the world”.

The United States embargo against Cuba is a commercial, economic, and financial one, put in place on February 7, 1962. It followed the overthrow of the military dictatorship of Fulgencio Batista, in 1959, by Fidel Castro, and the establishment of the first Community country in the region.

Among the highlight of the summit will be the signing of a Memorandum of Understanding between the Caribbean Disaster Emergency Management Agency (CDEMA) and Cuba’s Agency for Civil Defence, which will provide opportunities for closer collaboration, especially following the devastating impact of the September 2017 hurricanes across the region, and the increased focus on climate change resilience.

The discussions here will also review the status of the decades-old CARICOM-Cuba cooperation in commercial and economic areas.

Trade relations between the two parties were strengthened in November 2017, with the signing of the Second Protocol to the CARICOM-Cuba Trade Agreement. The Protocol expands reciprocal duty-free market access to more than 320 items, including meat, fish, dairy products, fruits, vegetables, beer, rum, cement, soap and apparel.

In his address to the summit here, Castro said the CARICOM-Cuba summits have led to a more “profound relationship, based on solidarity and cooperation”, highlighted by the recent passage of the Hurricanes Irma and Maria that caused widespread devastation and death in the Lesser Antilles.

He said Havana also welcomed the second bilateral trade agreement with CARICOM that comes into effect in January next year, noting that during the period 2014-16, there has been a 17 percent increase in trade among the countries and “this year we are going at a good pace”.
Castro warned of the changing global environment, which he said, held implications for the region, urging greater unity “while respecting our diversity and by promoting genuine integration and cooperation among ourselves.

“The dangers to the survival of the human species are growing. The consequences of the implementation of the universally rejected concepts, such as humanitarian intervention and the responsibility to protect, have become cover-ups for interventionist actions compromising international peace and security.”

“Such predicaments should appeal to us to defend international law and the full validity of the purposes and principles enshrined in the United Nations Charter,” Castro said.

He told the opening ceremony that CARICOM-Cuba should “harmonise our positions to demand from the industrial countries their actions conducive to the mitigation of, and adaptation to, the effect of climate change, especially in terms of financially resources and technology transfer.

“Additionally we should coordinate our position with a view to the 2030 agenda for sustainable development, particularly to put up a united front, enabling us to resist the domination mechanism imposed by the unjust international financial system.”

He said Cuba is prepared to support the position of the Small Island Developing States (SIDS) and developing nations “to receive a special and differentiated treatment concerning access to commercial and investments.

“We re-affirm our support for the just demands of these countries to receive cooperation, in conformity with the real situation and access to each and every one of them. Such cooperation should not be based on statistics of their per capita income.”

Castro said to simplistically describe the countries as “middle income countries” and preventing them access to concessionary loans was wrong, since it was “jeopardising their economic development”.

“We strongly support the fair demand of the Caribbean Community for reparations, as they have been raised with the colonial powers for the horrors of slavery and human trafficking,” he said, paying tribute to CARICOM for its involvement in several Latin and Central American organisations, aimed at fostering greater collaboration within this hemisphere.

He said in 2014, CARICOM countries signed the declaration, declaring the region a zone of peace and agreeing not to interfere, directly or indirectly, in the internal affairs of member countries.

“Therefore we should not permit that the Bolivarian Republic of Venezuela, one of our Latin American and Caribbean nations (to) suffer from the continued actions aimed at the destruction of its constitutional order.

“Cuba re-affirms its enduring solidarity with and support for the heroic people of Venezuela…for the government, headed by President Nicolas Maduro,” he said.

The Summit will conclude with the adoption of a CARICOM-Cuba Joint Declaration.