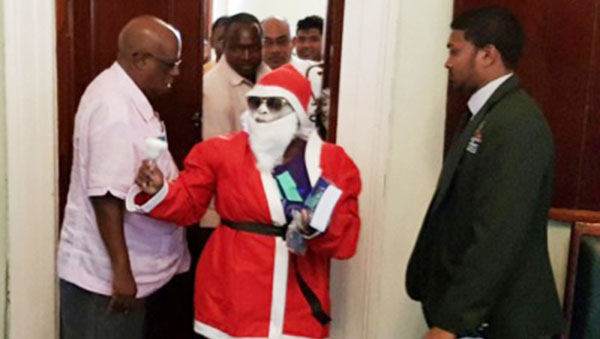 GEORGETOWN, Guyana, December 8, 2017 (CMC) – The Guyana Parliament, today, was dealing with a “serious security breach”, after a person, dressed up as Santa Claus, walked into the Chambers as Opposition Leader, Bharrat Jagdeo, was delivering his response to the GUY$267.1 billion national budget.

The “Santa Claus’, carrying a dictionary gift and a bell, passed security and calmly walked into the Parliamentary Chambers.

Clerk of the National Assembly, Sherlock Issacs, described the action as a “serious security breach”, telling reporters that he could not recall an incident of this nature ever happening before.

“They told me that apparently the person came in properly dressed and changed his/her clothes in the MPs’ washroom,” he said.

Media reports said that the “Santa Claus” made his way into the Chamber, using the entrance that is only used by government legislators and Parliamentary staff, and began ringing a bell before announcing that she had a gift — which was a dictionary — for the Opposition Leader.

The “Santa Claus” was apprehended by the assistant Sergeant of Arms, who is the internal security of the Assembly. But there are reports that the person had been able to escape.

“What I was told by the police at the Public Buildings is that a stranger snatched the person and whisked him/her out of the compound,” Issacs said.

“How the assailant bypassed the elaborate security arrangements, including TSU guards and the scanners on the ground floor of the parliament building, is highly suspicious and questionable,” Rohee said, adding that the Opposition has formally written to the Clerk of National Assembly.

He said the opposition legislators have also called for an urgent meeting of the Parliamentary Management Committee, to investigate the incident and that the breach extends to an attempted physical assault on Jagdeo.