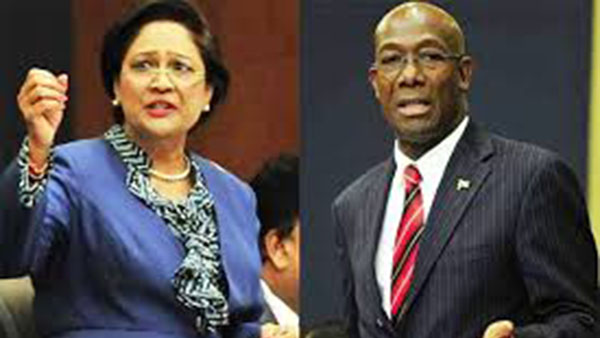 In a statement read out in Parliament, Rowley said that since the defeat of the legislation, when opposition legislators refused to give support to the measure that had required a two-thirds majority, “several comments and statements have been made in daily newspapers, and on radio and television stations, in relation to my participation during the Committee stage of the Bill”.

He said never in his 31 years as a legislator, has he “experienced the manner of objectionable and vile attack such as the one that I am now being subjected to.

“Members of Parliament, my very own colleagues, led by the Leader of the Opposition, herself a former Prime Minister, have engaged in an orchestrated course of malicious character assassination against me, by seriously misrepresenting events, which occurred in this House, earlier this week.

“I feel personally affronted and offended because, as Prime Minister of this country, I extended myself and made a very concerted effort to ensure that this government reached across the aisle to give serious consideration to the concerns of the Opposition on this particular Bill. As some of you may now be aware, the Anti-Gang Bill sought to address serious challenges, faced by the Trinidad and Tobago Police Service, in treating the problem of organised crime in this country.”

Speaking on a radio program, here, on Friday, Persad Bissessar defended the decision of the main opposition United National Congress (UNC) to vote against the bill, which the government said was a complete replica of the legislation her People’s Partnership administration had passed when it was in office, between 2010-15.

“Every time we raised something, put it to the vote, we not doing that. It doesn’t sound like someone who wants to reach a consensus or want to pass it. So I wonder, again, whether they sabotaged their own bill…so they could continue to blame us for everything under the sun,” she added.

She told listeners that she saw Prime Minister Rowley on television, indicating that the government had given the opposition “everything”, adding “nothing is further from the truth”.

She said the concerns raised during the committee stages by the opposition “were genuine concerns in the interest of the public and the citizens of our country”.

But in his statement to Parliament, Prime Minister Rowley said “what compounds the offensiveness of this matter is the fact that the person at the helm of this most abominable and contemptible attack on both myself as well as on the records of this House, once held the office I now hold, and, like me, is a longstanding member of this House.

“I have listened very closely to the comments and statements being made, and I have been forced to ask myself, why is this sustained effort being made to misrepresent what I said and did during the consideration of this Bill?

“Upon reflection, the only conclusion that I have been able to arrive at, is that the intended effect is to damage me, personally, as Member of Parliament for Diego Martin West and as Prime Minister.”

Rowley said that he “categorically” rejects any assertion or suggestion that he refused to negotiate or was uncooperative during deliberations on the Anti-Gang Bill.

“In the final analysis, the Anti-Gang Bill, which was first read and introduced in this House, was substantially amended to give effect to the many requests made by the opposition,” he said, adding that during the consideration of the Bill, several issues were discussed and compromises reached.

“In fact, the inclusion of a sunset clause as a proposed Government amendment was a result of my own initiative. Madam Speaker, the amendment was included after I listened to the Opposition’s view on the issue, held discussions with the drafters and Members of the Government bench and, more particularly, made a personal intervention with the Opposition Chief Whip, Member of Parliament for Pointe a Pierre, when we met, at my request, behind the Speaker’s Chair.”

Rowley said he had served as an opposition legislator for 14 years and “it has been my experience and understanding that when an opposition feels strongly about any particular issue during the consideration of a Bill in Committee, they will usually register their disagreement when the question is put on the particular clause. This did not happen on this occasion”.

He said the official report of the debates in the Hansard, provides a clear and faithful transcription of words spoken during the proceedings.

“The Hansard ensures that democracy is accessible and transparent. Via the Hansard, any citizen has the opportunity to inform himself about decisions made by the Parliament, and to verify the records to see what has been said about any Bill or issue by every single Member of Parliament.

“In this case, the Hansard record will clearly show that the question for the inclusion of a new sunset clause was put to all Members three (3) times, and on each occasion there was not one single dissentient voice.

“So it is indeed shocking to hear the Leader of the Opposition, who led her Members to vote against the Bill, thereby defeating it, now seeking to defend her actions by claiming that this position was motivated by my refusal to include a sunset clause in the Bill.