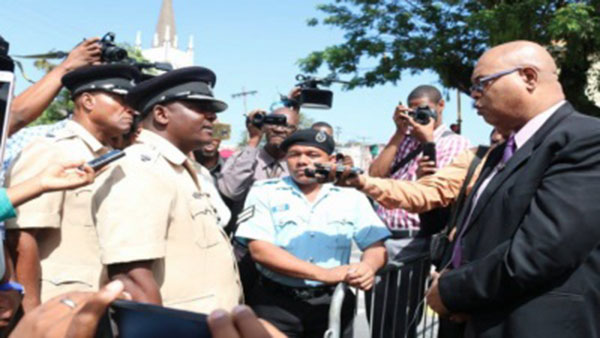 GEORGETOWN, Guyana, December 13, 2017 (CMC) – Opposition legislator, Bishop Juan Edghill, yesterday, was suspended from four sittings of the National Assembly, after the government used its majority to table and pass a motion, suspending him for his “gross misconduct”, during Monday’s sitting of the Assembly.

Government Chief Whip and Minister of Social Protection, Amna Ally, successfully moved a motion, noting that “following the gross disorderly conduct of the Honourable Member, Juan Edghill, of the 79th sitting of parliament, I wish to move that this member be suspended from the service of the Assembly for the next four sittings of this Assembly, that is December 15th, 2017”.

Members of the main opposition People’s Progressive Party (PPP) later walked out in solidarity with Edghill, who, on Tuesday, had defied the Speaker, Dr. Barton Scotland, that he be removed from the Chamber.

Scotland, himself, had signalled that Edghill would remain suspended when he told a news conference, on Monday night, that “the 79th sitting of the Assembly…will continue tomorrow (Tuesday). The Honourable Member Juan Edghill remains suspended”.

Following the government’s move on Tuesday, the Speaker announced the suspension of Edghill , who was prevented from entering the Parliament building, on Tuesday, by police officers.

Opposition Leader, Bharrat Jagdeo, who raised concern over the suspension, took his seat after he was asked to do so by the Speaker.

“I just wish to record our significant dissatisfaction with what you just said in this Chamber. You spoke about the unprecedented behaviour but you did not speak about the unprecedented presence of police in this House. The police assaulted people and you yourselves said you did not invite into this House. I believe this is an attempt to muzzle Juan Edghill,” he said. 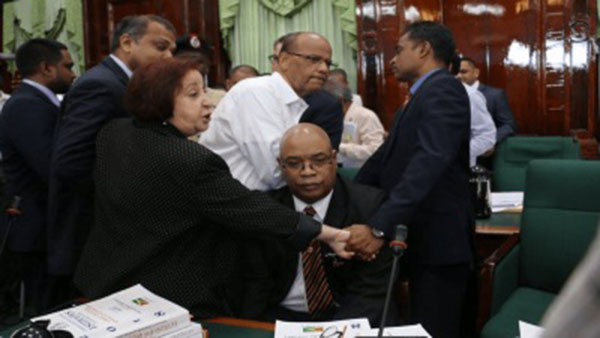 Jagdeo said that Edghill, a former finance minister, had been targeted because he is one of the “more aggressive questioners” in “decimating” the estimates.

The opposition leader accused the Speaker of colluding with the government, in shielding government from scrutiny of the estimates.

“We believe that was an attempt to denude us from some of our best speakers, but we cannot cede our responsibility,” he added.

But the Speaker, who later explained that the motion does not allow for debate, said the four-days suspension was very lenient, since the Standing Orders allowed for suspension for the entire parliamentary session. He said so grave was Edghill’s misconduct that he could have been suspended for the entire session of the current parliament.

Following the passage of the motion, legislators went back to the Committee of Supplies to consider the budget estimates.

The Speaker said he would continue from the point on Monday, when the Assembly was suspended.

The Opposition legislators then sought to ask questions as the Speaker moved through the Ministry of the Presidency estimates, but the questions were not allowed, with the opposition staging a walkout.