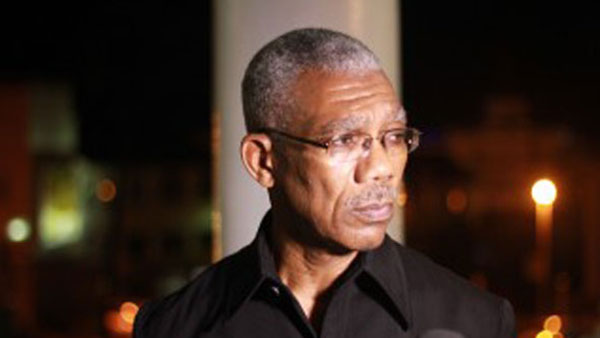 GEORGETOWN, Guyana, December 13, 2017 (CMC) – President David Granger, today, acknowledged that US-based oil giant, ExxonMobil, had paid over US$18 million as a signing bonus to his government, and that he had no intention of deceiving the population on the issue.

On Sunday, ExxonMobil country manager, Rod Henson, confirmed that the payment had been made, telling a public lecture that “signing bonuses are customary and normal in many petroleum agreements”.

ExxonMobil — whose affiliate, Esso Exploration and Production Guyana Limited (EEPGL) holds an interest and is the operator in the Stabroek, Canje and Kaieteur Blocks, offshore Guyana — recently announced that it made a fifth, new oil discovery after drilling the Turbot-1 well, offshore Guyana.

Henson said the money was paid over to a Bank of Guyana account, which was set up by the Guyana government, insisting that it was paid “not to an individual but to a government bank account, designated by the Ministry of Finance”, last year.

The Granger administration has come under criticism over its silence on the issue, initially indicating that no signing bonus was paid, but rather it was money to assist Guyana in its border case against Venezuela.

Henson said it was a signing bonus, but his company has no say in what the government decides to do with the money. He reminded that as a commercial entity, ExxonMobil would have no role in determining how Guyana should spend the money.

But President Granger told reporters that placing the funds in a government account is a legitimate government exercise and that he accepts full responsibility.

He insisted that there was no intention to deceive the population, saying the transaction was conducted in that manner because of possible national security implications. He said, as the head of government, he made a decision not to make the information public.

Granger said while there are concerns over the money being placed in a special account instead of the Consolidated Fund, he believes at the time, it was the best thing to do, so as to have access to the funds should an emergency arise.

“It’s not a question of secrecy. Evidence of non-disclosure does not mean there is evidence of deception… There was no intention to deceive, but I made government decision not to make it public,” he said, defending government ministers, who, in the past, had denied that a bonus had been paid.

“I am responsible for everything surrounding the transaction,” he added.

Henson noted that as Guyana undergoes measures to become a full-fledged member of the Extractive Industries Transparency Initiative (EITI), “these types of payments will be made public as part of that process”.

Exxon is a founder of the EITI process, which requires all extractive industries: oil, mining, and forestry, to disclose monies it pays to the government. Likewise, the government discloses monies received and an independent third party evaluates and validates the information and publishes it.

Earlier this month, the government announced that it would be releasing the contract signed with Exxon before the end of this year.