New in Pride
Home / International News / Guyanese National, Jailed Wrongfully In US For 30 Years On Rape And Robbery Conviction, Released 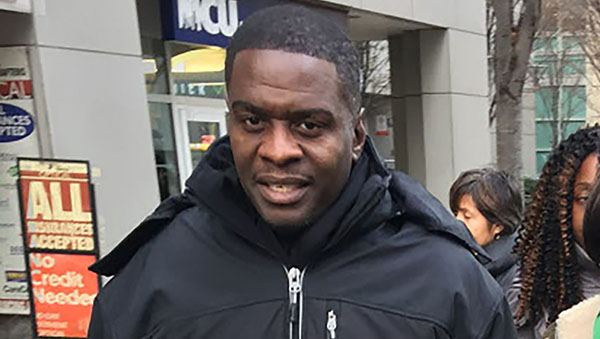 Mark Denny, a Guyana-born US permanent resident, who spent 30 years in jail in New York, on a wrongful rape and robbery conviction, was exonerated and released on Wednesday.

Guyanese National, Jailed Wrongfully In US For 30 Years On Rape And Robbery Conviction, Released

BROOKLYN, New York, December 22, 2017 (CMC) – A Guyanese national, who spent three decades in jail in New York on a wrongful rape and robbery conviction, is heading home to Brooklyn for Christmas.

On Wednesday, the Brooklyn District Attorney’s Office said that it moved to vacate the conviction of Mark Denny, 47, and dismiss the indictment, after an investigation revealed faulty witness identification.

Later in the day, Denny appeared before Brooklyn Supreme Court Justice, Matthew D’Emic, who made his exoneration official.

After the decree, it was reported that Denny smiled and waved to his family and friends, who filled the court gallery.

“I’m overwhelmed thinking of what I’ll do next to get my life back on track,” he said after walking out of the courthouse an innocent man.

“I have no ill feelings towards the victim,” he added. “Going to prison was a traumatic experience mentally. There’s a lot of people in my position. I appreciate everyone for all they have done for me.”

“After a lengthy and extensive investigation into this horrific case, I have concluded that the cause of justice requires that we vacate the conviction of Mr. Denny,” Gonzalez said in a statement.

Denny was exonerated with the help of the Innocence Project, which had been working on his case since 2009.

“Mr. Denny has been waiting for this day for a very long time,” said Nina Morrison, senior staff attorney for the Innocence Project.

“We owe a tremendous debt of gratitude to District Attorney, Eric Gonzalez, and members of his conviction review unit, for recognizing Mr. Denny’s innocence and taking extraordinary steps to right the wrongs that kept Mr. Denny incarcerated for his entire adult life,” she added.

Denny was accused, with three other defendants, of a late-night gunpoint robbery and rape at a Burger King in the Kensington section of Brooklyn on December 20, 1987.

The four were accused of forcing their way into the restaurant, after closing, and holding two employees — an 18-year-old woman and a male — hostage.

They ordered the two employees to undress, took US$3,000 from a safe, and then raped and sodomized the woman in a back room.

It said the victim had a blindfold over her eyes during a portion of the attack and may have passed out.

Denny became a suspect in March 1988, after he was busted two months earlier for gun possession.

According to reports,  he was arrested in a car with the three other defendants, who were wanted for robbing a Manhattan Burger King.

But the problems in identifying Denny began right away as detectives reportedly showed the rape victim a picture of Denny, but she did not identify him. Two days later, she was able to identify him in a lineup.

But during Denny’s trial, the victim was vague in her description of him and his actions, the Daily News said.

Dr. Jennifer Dysart, a John Jay College psychology professor, whom the District Attorney hired as a consultant to examine the case, said the victim’s witness reliability was likely affected by her limited opportunity to see her attackers, the existence of a gun, the extreme stress from the attack and the time lapse between the incident and the identification process, according to the Daily News.

Gonzalez said he did not fault the police investigators or the victim, noting that “little was known back then about memory retention and retrieval, and their effect on eyewitness identification”.

The district attorney said other factors contributed to vacating the conviction. He said Denny’s fingerprints were also not found at the crime scene, the Daily News said in its report.

However, it said two of his co-defendants’ prints were recovered at the Burger King.

One defendant, Raphael James, was convicted by a jury and was sentenced to 16 to 48 years in prison and the third co-defendant, Eddie Veira, admitted his involvement and pleaded guilty.

Denny’s co-defendants all told the DA’s conviction review unit that Denny was not involved.

The defendant whose case was dismissed even admitted his culpability to the Conviction Review Unit, but maintained Denny wasn’t there, Gonzalez said.

Denny was convicted in 1989 and sentenced to 19 to 57 years in prison. He always maintained his innocence throughout — even through parole hearings.

Gonzalez said Denny’s staying committed to his innocence and refusal to participate in a sex offender program, likely hurt his parole chances.

Even with his innocence established, Denny still faces some legal hurdles, the Daily News said. As a child, he came to the United States from Guyana as a lawful permanent resident.

While in prison, he was ordered to be deported due to his convictions, however, the Cardozo Law School’s Immigration Justice Clinic in Manhattan is working to reopen his case and prevent his removal from the country.