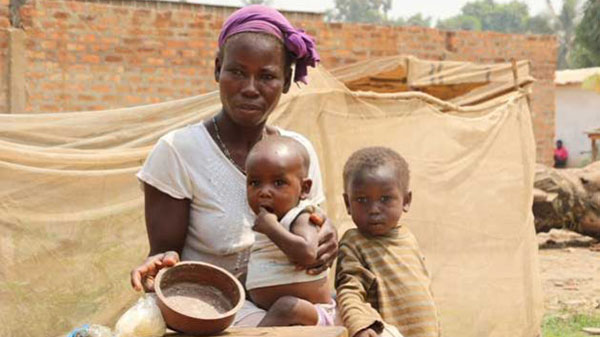 Two and a half million people in the Central African Republic (CAR) are facing hunger. Photo credit: WFP/Bruno Djoye.

Renewed Partnership To End Hunger In Africa By 2025

After a period of prolonged decline, world hunger is on the rise. Africa has the highest rates of hunger in the world, and they are increasing. Agricultural and livestock productivity in Africa is under threat. This is largely due to conflict and climate change.

Hunger, food insecurity and poverty are closely linked. Sustainable and inclusive agricultural growth is vital to achieve both SDG1 on poverty and SDG2 on hunger, and also influences many other Goals. This means adopting national agricultural policies and investment plans that focus not only on agricultural sector development, but on poverty, hunger and resilience to climate change.

Climatic shocks, environmental degradation, crop and livestock price collapse and conflict are all interlinked. Climate change adaptation should be promoted as an integral part of conflict prevention, with special attention to sustainable agriculture and pastoralist and semi-pastoralist livelihoods.

It is important to highlight that the majority of undernourished people in Africa live in countries affected by conflict. Hunger is almost twice as high in conflict-affected countries with a protracted crisis. Stronger commitment by governments, the African Union and the United Nations is needed to promote peace, human rights and sustainable development also as instrument to fight hunger.

During conflicts and protracted crises, we still need to assist people most at risk of hunger and malnutrition and support them to build more resilient livelihoods. That means preventive interventions to break the link between food insecurity and conflict, such as shielding consumers and producers from food price shocks through price stabilization measures and social protection interventions.

To build and sustain peace and address hunger and poverty, we need community-based approaches that build social cohesion and the capacity of local institutions and actors. Improved governance that can deliver equitable services is essential.

Social protection is needed to complement development efforts. The poor need to be helped from the poverty trap and given the tools to ensure they do not slide back.

Many countries in Africa have increased agricultural expenditures, but only five countries have met the 10 per cent target of the Comprehensive Africa Agriculture Development Programme.

Gender equality is also essential and will help us accelerate progress towards achieving food security and nutrition. Women represent 60 per cent of the agricultural workforce in parts of Africa and make crucial contributions to food production, food processing and marketing. Improving women’s social and economic status within their households and communities has a direct impact on food security and nutrition, in particular on child nutrition.

While much of the effort of development partners is on developing policies and programmes, too little attention is given to mobilizing resources and investment on implementation and capacity building.

It is important that international cooperation is brought to bear under the framework of the Addis Ababa Action Agenda and that developed countries not only meet the Official Development Assistance (ODA) targets but that they allocate adequate levels of resources for sustainable agriculture.

Many countries in Africa have increased agricultural expenditures, but only five countries have met the 10 per cent target of the Comprehensive Africa Agriculture Development Programme.

Most National Agriculture Investment Plans are not fully implemented. Governments and development partners need to significantly increase their resource allocation and improve targeting of hunger and poverty eradication initiatives.

Governments need to create conditions for much greater investment by the private sector in enterprises that can generate benefits for the poor and the food-insecure. Market inefficiencies remain a primary handicap for farmers. Infrastructure is often lacking to ease access to local markets, and regional market integration is insufficient.

Finally, all stakeholders need to be accountable for commitments. That means generating and sharing data and information on policy and institutional changes, resource allocations and investments, and progress on SDG1 and SDG2 and related national and regional goals and targets.

António Guterres is Secretary-General of the United Nations.