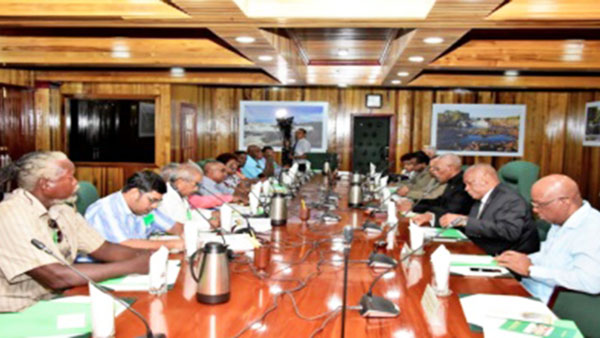 GEORGETOWN, Guyana, January 30, 2017 (CMC) – The Guyana Agriculture and General Workers’ Union (GAWU) has brushed aside criticisms of its decision to hold talks with the government on the plight of sugar workers, insisting that it is necessary to engage the David Granger administration so as to protect the interest of its members.

“Our union’s view is that in the difficult conditions workers are now confronting, we should not close our mind, ears and eyes to any sort of engagement; for doing otherwise, in this instance, would certainly not be pleasing to the beleaguered, jobless workers,” GAWU said in a statement.

Last weekend, Opposition Leader, Bharrat Jagdeo, dismissed the outcome of the talks between GAWU’s Komal Chand and Guyana’s President, David Granger, noting “we will not support the union there”.

Jagdeo seemed to suggest that the older members of the union should make way for “good, strong, young, bright leaders of GAWU, who will have a great future in building that union and keeping it relevant”.

While he insisted that the opposition party had no “rift” with the union, he said he took issue with the statement by Chand, that he was pleased with the meeting and it was important to talk about the future of the workers.

“What’s this agreement and that bothers me. This is a government, how can you find them genuine when they have just sent home seven thousand of your members, but this didn’t come from GAWU,” Jagdeo told a news conference.

But in its statement, GAWU said that while it recognizes and respects Jagdeo’s right to an opinion, it was disappointed that he commenting without being properly briefed on the statements issued by GAWU after the meeting with government.

“The Opposition Leader questioned what “common ground” the sugar unions and the Government reached. It seems maybe Mr. Jagdeo misunderstood the conclusion of the meeting, as both GAWU and NAACIE undertook to work with the government in reaching “common ground”.

“We did not advise that ‘common ground’ was reached. In fact, the GAWU statement pointedly said: ‘[o]ur Unions [GAWU and NAACIE] recognized the importance of working along with the Administration in finding an acceptable solution to the crisis which has now beset scores of communities and thousands of Guyanese’.

“It is in this context that our Union expressed our cooperation. Moreover, the Opposition Leader, who was President for over a decade, should know better than most, that issues of this nature and magnitude cannot be resolved in a fully comprehensive way at a single meeting, though one would wish that could happen,” GAWU said.

It said that it was also surprised that some of the statements now being made by Jagdeo were raised by the union with the government during the meeting.

“In our presentation, we reiterated our strongly-held position that the decision to shutter estates was incorrect and that there were several workable ideas to secure the sugar industry and urged the Administration to re-look and re-think its decision.

“In addition, we told the government that we disagreed with privatization, but said that if this is the Administration’s intention we called for those arrangements to be transparent. We went on and urged that maximum value be secured for the assets and, therefore, in keeping with such a stance, the estates should be re-opened, the workers re-employed and they made into going concerns before any sale takes place.

“Additionally, we insisted that the government ensure that certain critical working conditions and rights are respected if there will be new owners,” GAWU said, as it chided Jagdeo for not informing himself of the union’s position after the meeting, in advance of going before the national media to criticise the meeting.

“These matters were explained in more detail in our press statement, but it is unfortunate that Mr. Jagdeo maybe didn’t have an opportunity to examine the copy that was sent to him electronically.

“Certainly, had the Opposition Leader required more information he could have requested a copy of our presentation, which would have better edified him on the matters we raised, and provided him an opportunity for any further clarification”, it said.