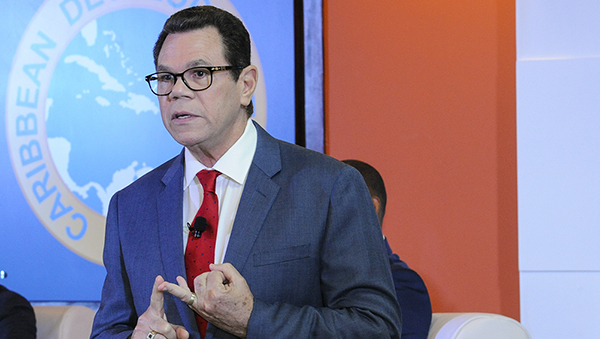 BRIDGETOWN, Barbados, February 8, 2018 (CMC) – President of the Caribbean Development Bank (CDB), Dr Warren Smith, has announced the bank will make US$800 million available, over the next five years, to assist with the recovery of borrowing member countries (BMCs) that were affected by recent, devastating hurricanes.

“We cannot underscore enough, the urgent need for liquidity in the aftermath of natural disasters,” Smith told the bank’s annual news conference at its headquarters, here, yesterday.

According to the CDB President, this was one of the reasons that the CDB augmented the capital of CCRIF SPC through US$14 million to provide enhanced and more affordable insurance coverage to BMCs that are insured with this facility. The grant was provided by the government of Mexico, which is a shareholder of the CDB.

This is part of the bank’s shift towards disaster risk management and resilience-building in its BMCs, which was prompted by recent, deadly hurricanes.

Smith said the CDB has reorganised its operations and put in place the appropriate supporting policy framework, as it expands its capacity to assist its BMCs in the area of disaster management.

“After a period of testing in 2017, CDB initiated systematic screening for climate risks in all its investment projects and country strategy work. As a consequence, we are now financing infrastructure projects that are more climate-resilient.

“This approach has been paying some dividends, as evidenced by a CDB-financed sea defence project in Dominica, which withstood the damaging effects of Hurricane Maria, last year,” he revealed.

According to Smith, the 2017 Atlantic Hurricane Season is a painful reminder of “our region’s inherent vulnerabilities”.

“The stories we heard from colleagues, friends and family have suggested that the people of Anguilla, Antigua and Barbuda, the British Virgin Islands, Dominica and the Turks and Caicos Islands experienced great mental and physical trauma. This, combined with the loss of life and infrastructural destruction, might best be described as a setback for our region.

“We live in a geographic zone, which is ranked as the second highest in terms of climate vulnerability and faces a future that is characterised by more intense and destructive meteorological systems,” he said.

Hurricane Maria caused damage, estimated at 225 percent of GDP, in Dominica, while the figure from Irma in the British Virgin Islands was more than 300 percent. In Antigua and Barbuda, the losses amounted to an estimated 10 percent of GDP, with 95 percent of buildings destroyed in Barbuda.

The CDB President noted that the financial cost of responding to natural disasters has been increasing as the frequency and intensity of these events continue to rise, and, according to him, the institution’s objective is not only to enable BMCs to rehabilitate damaged infrastructure, “but to also improve their resilience to such disasters by building back better and stronger”.

Smith acknowledged that in order to achieve that goal, the CDB must be able to offer grants “and other attractively-priced financial resources”, in order to incentivise its BMCs to invest in climate-resilient infrastructure.

In that regard, the bank has been drawing on resources from its development partners, as well as its own resources, to meet this challenge.

“I am pleased to report that in 2017, we stepped up our resource-mobilisation efforts, which led to additional financing, in the form of a second Climate Action line of credit for around US $144 million from the European Investment Bank, including an estimated US $24 million for emergency post-disaster rehabilitation,” Smith stated.

He added that the CDB has also secured a US$14 million grant from the European Union for geothermal energy development in five Eastern Caribbean countries, namely: Dominica, Grenada, St. Kitts and Nevis, St. Lucia, and St. Vincent and the Grenadines.

A new US$70 million Mexico Infrastructure Fund will also provide grants to boost regional infrastructure development, Smith said, while the United Kingdom Caribbean Infrastructure Partnership Fund has been expanded to include an additional £28 million, which will assist in the recovery efforts in Antigua and Barbuda and Dominica.

Smith noted that the Caribbean has a long history of bouncing back from natural disasters and other external shocks, and despite the setbacks caused by last year’s natural disasters, “our region must get back on track on track, as quickly as possible, so that we can meet our commitments to the 2030 Sustainable Development Agenda”.