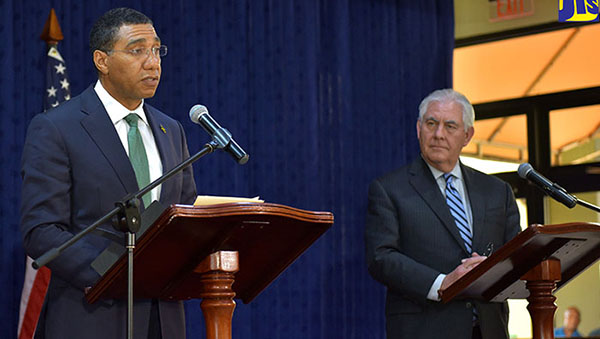 Tillerson arrived, here, as part of a visit to Latin America and the Caribbean and Holness told a news conference that the deliberations were positive and covered several areas, including trans-border crime, security and economic transformation.

“I expressed the hope that the US would continue to support our thrust towards energy independence in the region, including greater efficiency in energy use and greater incorporation of renewable energy sources. 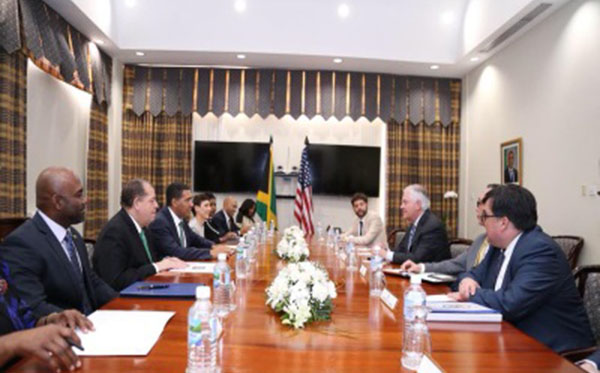 “I expressed the hope that the United States will strengthen its economic partnerships and participation in the region, in the interest of our respective countries and peoples,” Holness told a joint news conference with Tillerson.

He added that during their deliberations “we discussed Diaspora matters and the invaluable contribution of Jamaicans, resident in the United States”.

He said he had expressed gratitude to Washington for its support to Jamaica over the years, “especially in the areas, which have assisted in meeting our national development goals”.

“In particular, we have greatly valued America’s efforts to disrupt trans-national crime, through continued support to effectively secure Jamaica’s maritime space,” he noted, adding that agreement had been reached on deepening that cooperation.

The Prime Minister also acknowledged “that the sharing and exchange of intelligence is critical to the safety and security of our two countries and the wider region”.

Holness said, with respect to the economic partnership, the meeting agreed that the transformation of Jamaica’s energy sector “is critical to the achievement of our developmental objectives”.

Holness said the meeting also explored avenues to broaden US-CARICOM engagement and the economic vulnerability of developing countries, including climatic events as well as de-risking and corresponding banking issues.

Tillerson told reporters that Jamaica has made important progress in combating the lottery scams and cooperating with US authorities in extraditing those engaged in the illegal activity.

“The US government will continue to support Jamaica’s security forces and criminal justice system,” he promised, adding “it is in both of our countries’ interest to work together….”

He said the discussions also examined “ways to promote increased energy dependence not just for Jamaica, but throughout the Caribbean and we stand ready to assist with Jamaica and other partners in the Caribbean to explore and develop resources they have…”