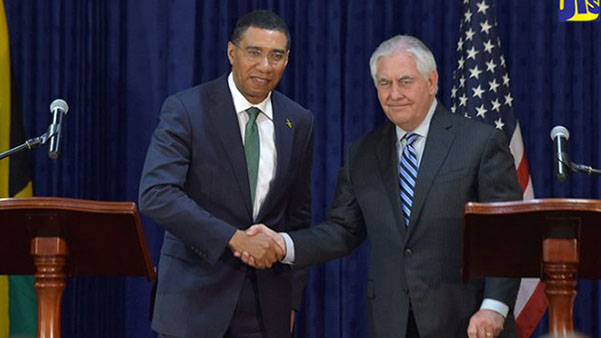 Jamaica And United States Call For Restoration Of Democracy In Venezuela

KINGSTON, Jamaica, February 8, 2018 (CMC) – Jamaica and the United States, yesterday, appealed to Venezuela to uphold human rights and allow for free and fair elections in the South American country.

Prime Minister, Andrew Holness, and United States Secretary of State, Rex Tillerson, both expressed disappointment with the actions of the Nicolas Maduro government that Washington has sought to isolate in recent years.

Tillerson, who arrived here as part of a visit to Latin America and the Caribbean, told a news conference that both the United States and Jamaica had a strong commitment to democratic values.

“That is why we are both heartbroken to see what’s happening in Venezuela; what was once a thriving democracy dismantled before our very eyes,” Tillerson said, adding “it’s the reason we intend to take all actions possible, to persuade the regime to return the full constitutional authorities to the hands of the Venezuelan people”.

“As to any future steps the US might take regarding sanctioning oil or products to put more pressure on the Maduro regime, we are going to take in the full consideration, the impacts on regional countries as well,” he said, adding that he had “a good exchange” with Holness regarding that issue.

He said the meeting had provided an opportunity of getting not only Jamaica’s position “but the prime minister’s perspective on other countries on how they might be affected”.

“We will be looking at what other actions the US might take to mitigate the negative impact of that,” he said, telling reporters he did not want to elaborate on that issue.

“Having said that, I think there is great unanimity in the region, and certainly in the hemisphere, that we all want to see some progress on this situation in Venezuela, which only gets worse day by day,” the Us Secretary of State said.

Holness said Jamaica has always supported human rights, as well as peace, in the region “and Jamaica wants to see the people of Venezuela being able to enjoy their democracy”. 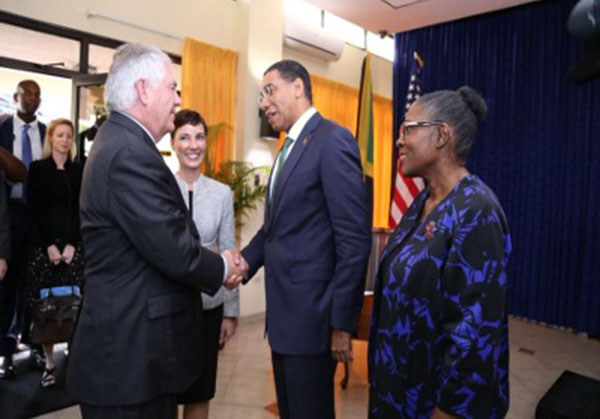 “This is a principle that has nothing to do with any other country. This has always been Jamaica’s position. We wish the best for the people of Venezuela,” he said, noting that the island does not now import oil from the South American country, as it used to do in the past, under the PetroCaribe initiative that Caracas had instituted several years ago to help regional countries deal with the high cost of petroleum products on the global market.

“With the new dynamics in the global trade in energy and with the United States now becoming a net exporter of energy resources, Jamaica can, in this new paradigm, benefit from that,” the Prime Minister noted.

Holness takes over the chairmanship of the 15-member regional integration movement (CARICOM) in July, and said both parties agreed “that positive engagement between the government and the opposition in Venezuela is essential”.

He added they both expressed regret that the attempts by the Organization of American States (OAS) to “promote dialogue have not been met with success”.

Tillerson said Washington was supportive of Jamaica adding its voice at the OAS about the situation in Caracas.

“Jamaica’s votes in the OAS to achieve stability, prosperity and support for democracy in Venezuela have demonstrated exceptional support for human rights issues that confront us in the western Hemisphere.

Venezuela’s all-powerful Constituent Assembly has already indicated that presidential elections could be held before the end of April, a move political observers say would benefit Maduro”s United Socialist Party of Venezuela and put the deeply-fractured and embattled opposition at a severe disadvantage.