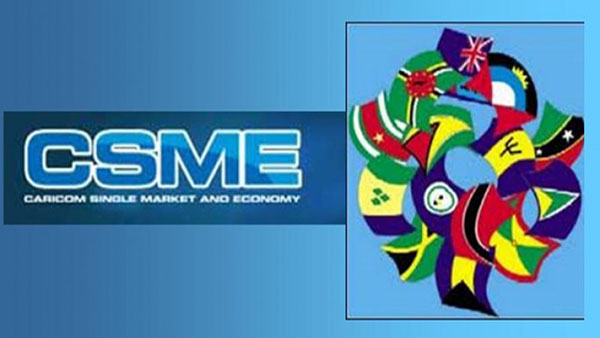 Can CARICOM Survive The Caribbean Single Market And Economy (CSME)?

BRIDGETOWN, Barbados, February 26, 2018 (CMC) – When it was established in 1989, the Caribbean Community (CARICOM) Single Market and Economy (CSME) was intended to deepen the regional integration movement and to better respond to the challenges and opportunities presented by globalisation.

The architects of the initiative were of the view, that while a primary focus of the common market was on liberalising trade in goods among the member countries, the single market and economy (SME) was intended to expand the process to include services, free movement of capital, skilled labour and the freedom to establish business enterprises anywhere within the 15-member grouping.

But as the regional leaders gather in Haiti for their inter-sessional summit, today and tomorrow, they will certainly be aware that the much-heralded CSME may prove to be a stumbling block and could possible lead to a fracture of the efforts towards a deeper regional integration movement.

At the center of such fears is the report of the Commission to Review Jamaica’s Relations within the CARICOM and CARIFORUM Frameworks, commonly referred to in Kingston as the “Golding Report”, given that the 17-member Commission was headed by the former Jamaican Prime Minister, Bruce Golding.

Jamaica Prime Minister, Andrew Holness, said that his administration had established the Commission, in June 2016, to review the effectiveness of existing arrangements within CARICOM, as well as to explore the strengthening of strategic partnerships within the CARICOM and CARIFORUM Frameworks.

“I tasked the Commission with the important work of conducting an in-depth examination of CARICOM’s performance, while identifying those aspects of our regional engagements within the Community that have not met their intended objectives, in line with the Revised Treaty of Chaguaramas to advance the regional integration process,” he said as he tabled the report in the Jamaica parliament, last month.

“Additionally, the Commission was charged with evaluating the effects of Jamaica’s membership in CARICOM on the country’s economic growth and development, with particular reference to trade in goods and services, investment, international competitiveness and job creation,” Holness said, making it clear that the review was not intended to seek an exit from CARICOM and from various regional arrangements, such as the CSME.

The Commission met with a number of people, including the incumbent CARICOM Secretary General, Irwin La Rocque; his predecessors, Edwin Carrington and Roderick Rainford; Sir Kenneth Hall, the former CARICOM assistant secretary general; Sir Shridath Ramphal, the former Commonwealth secretary general; UWI Vice-Chancellor, Sir Hilary Beckles; the former Barbados Prime Minister Owen Arthur; and Dr. Keith Rowley, the Trinidad and Tobago Prime Minister, who, on attaining office in 2015, expressed his frustration with the lack of action on the CSME, saying, “I get the impression that all we are willing to do is talk this issue to death”. 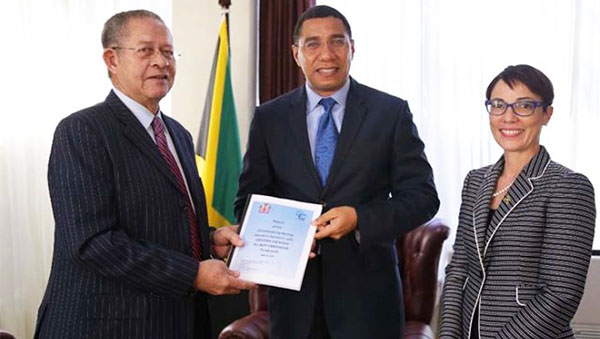 “We cannot expect to get the benefits of medication if we refuse to swallow the medication,” Rowley, then the newest kid on the prime ministerial block, told his colleagues at the 38th Regular Meeting of CARICOM leaders in Grenada.

Sir Hilary believes that Jamaica undertook the review because of its “anxiety and frustration” with the attainment of economic growth and the non-implementation of the CSME, forcing Kingston to establish the Commission to look into its future.

“This report is about economic growth and Jamaica’s anxiety with attainting it, and the commitment of the Jamaican State to achieve economic growth against this background,” he told a UWI Forum, two weeks ago, while discussing the Commission’s report.

The report contains 33 recommendations, with Dr. Damien King, a Commission member, indicating that 32 of these recommendations “don’t have to do with Jamaica’s relations”.

“It has to do with CARICOM and CSME,” King, the co-Executive Director of the Caribbean Policy Research Institute, told the UWI Forum, noting that “it is not an ultimatum, it is a recommendation that says we have two choices. We can decide…to finally, at last, make a serious attempt at true integration for a single market and economy and here is what it takes to do that”.

“But if you are not prepared to do that, then not only Jamaica but everybody, should stop pretending. Our choices are to do it or stop pretending, but the continued pretence is not one of the options. That is what the report is about,” King insisted.

Golding said economic imperatives were not the only factor in the Commission’s work, making reference to the “serious cultural and political issues as well”.

“It is certainly my view and shared by other members of the Commission…that at the root of the problem is that lurking insularity, a parochial mistrust and jealousy of each other, and it is all neatly wrapped up in some inward-looking…concept of sovereignty,” said Golding, who served as prime minister from 2007-2011.

He said there is a feeling of betrayal in the region “by embracing too tightly (to) something that is multi-national or regional”.

“I found this to be paradoxical, because that same notion of sovereignty is quite prepared to submit itself to broader international rules and norms,” Golding argued, noting “we are bound by World Trade Organization (WTO) rules”.

“We are quite happy to observe binding resolutions that are carried by the United Nations, but we are not prepared to submit that sovereignty to the regional integration movement,” he said, suggesting there may be a reason for this attitude.

“We may be fearful of the consequences if we don’t (implement international rules) and the isolation that we would suffer, but we are not prepared to do that at the regional level, and part of the reason for that, is that we have not made CARICOM into the kind of institution where the benefits are so obvious and significant….”

Golding said the Commission had “clearly detected a reluctance” on the part of all the member countries, “some more than others”, to embrace the challenges of the CSME.

“What they will say is somewhere in the future, maybe, we will get to that stage, but right now we can’t take the risk,” Golding said, noting that what has occurred in the region in the 25 years since the “Time For Action Report,” as presented by the West Indian Commission, “is a constant cherry picking of these elements of the Treaty of Chaguaramas”, where certain “CSME requirements that we feel we can work with because we think we can get something out of this (are implemented) and finding clever ways to avoid others”.

“We are at a stage where we have picked off all the low hanging fruits, but we are not willing to climb the tree where there is an abundance of fruit,” Golding said.

The Guyana-based CARICOM Secretariat has noted that while the implementation and operation of the SME is being undertaken by a number of stakeholders, there is progress, pointing to the continued work on standardization and harmonization in areas such as anti-dumping measures; banking and securities; competition policy; consumer protection; customs; intellectual property rights; food and drug regulation and labelling; standards and technical regulations; manufacture and trade in goods regulations as well as regulatory and institutional and administrative procedures in member states, to enable efficient intra-regional trade in keeping with established regional trading arrangements.

It has noted that in 2016, for example, major emphasis had been placed on the development of model laws and regulations to make CSME member states more compatible with CSM obligations, as well as providing technical assistance and training to strengthen capacity and improve capabilities of governmental bodies in the 15-member grouping, to operate the CSME.

But despite that, the Commission in its report recommended that “there needs to be a clear definitive commitment, now, from each member state, to a specific time bound, measurable and verifiable program of actions to fulfil all its obligations and complete all the requirements for the single market and economy to be fully established and operational within the next five years”.

Failing this, the Commission is advocating that Jamaica withdraw from “the single market and economy”, even while seeking “to retain its position as a member of CARICOM in a status similar to that of the Bahamas”.

But Rainford disagrees, saying that Jamaica, instead of proceeding with the recommendation to withdraw from the CSME, should consider the alternative of reciprocity.

“In other words, deal with each of your fellow CARICOM member states on a reciprocal basis, based on what they have completed,” he argued, having earlier said he was pleased that many of the decisions taken by regional leaders to deepen the regional integration movement had not been implemented over the years.

Holness has said he is looking forward to discussing the report with his CARICOM colleagues and to receiving their feedback as well as the feedback from the CARICOM Secretariat, insisting that “the region must boldly reposition itself within the global context for greater economic cooperation to our mutual benefit as a collective force”222.

“I am confident that in completing our collective review of the Report…we will be able to make the right decisions, and take the necessary actions to ensure the advancement of the region through CARICOM and continued cooperation with CARIFORUM States within the framework of the ACP Group of States,” Holness said.

The next CARICOM summit will be held in Jamaica in July.