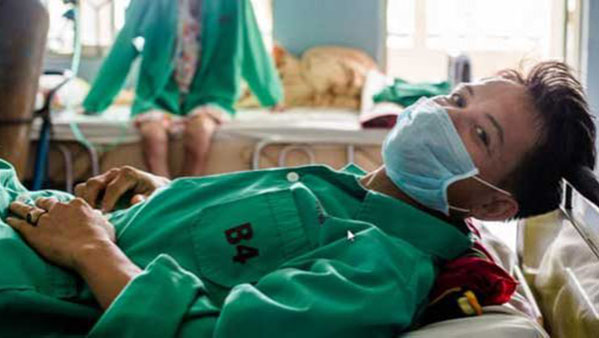 Latin America And The Caribbean Edging Towards Eliminating Tuberculosis?

WASHINGTON DC, March 19, 2018 (IPS) — Known as El Libertador throughout the Latin America and Caribbean (LAC) region, Simón Bolívar was central to the battle for independence from Spanish rule in Venezuela, Bolivia, Colombia, Ecuador, and Peru.

A less known fact is that Bolívar, the son of a wealthy Venezuelan creole family, died from tuberculosis (TB) on December 17, 1880, at age 47. His compatriot, renowned impressionist, Cristobal Rojas, painted La Miseria in 1886, depicting the social conditions of the day that gave rise to TB. He died from the disease in 1890 at age 33.

Tuberculosis is an ancient disease. Results from a 2014 DNA study of remains in southern Peru suggest that human TB was present 6,000 years ago. This chronic familiarity of the disease no doubt makes it more difficult to generate the attention required to eradicate it from the human experience.

Observed as World TB Day each year, March 24 is the annual opportunity for advocates and interest groups to build public awareness about the disease, which killed 1.7 million people in 2017 and sickened more than 10 million.

The date marks the anniversary of the announcement in 1882 by Robert Koch, a German physician and microbiologist, that he had discovered the cause of TB: the tubercle bacillus.

Koch’s work was seminal in the treatment of TB—also known as the white plague—which was devastating populations in Europe and the Americas at the time. One in seven people in London, died from TB in the early 8th century, and by the start of the 19th century, the number had grown to 1:4.2 –fueled in part by the squalid conditions of the growing Industrial Revolution.

A hundred years after Koch’s discovery, in 1982, the International Union Against Tuberculosis and Lung Disease proposed observing the date as World TB day. The WHO formally recognized the annual observation more than a decade later.

Last year, WHO announced United Nations High-Level Meeting (UNHLM) on TB on September 26, alongside the 2018 General Assembly. The meeting is expected to build on the outcomes of the 2017 Moscow Ministerial Conference and commit to providing the resource and policy framework needed to end TB.

Anyone can catch TB, which is spread when an infected and untreated person coughs, spits or sneezes. However, it is still mostly spread in conditions of poverty and therefore more prevalent among populations in the global south.

In the LAC region, eight of 33 countries made the list in 2016: Haiti with 194 cases per 100,000 followed by Peru with 119; Guyana, 93; Dominican Republic, 60; Ecuador, 52; El Salvador, 43; Honduras, 43; and Brazil and Paraguay with 41 each. While the incidences are far less than in parts of Africa and Asia, the disease remains a problem, correlated with conditions of poverty and particularly among indigenous populations and people living with HIV.

Haiti’s high numbers are attributable to the country’s desperate problems of poverty including overcrowded living conditions, poor sanitation, and inadequate healthcare services. The high cost of drugs and difficult treatment regime exacerbates conditions for those who become infected.

In the aftermath of the devastating magnitude 7.0 earthquake in 2010, which destroyed the health infrastructure in the Haitian capital, Port-Au- Prince, and left 1.5 million people homeless, the number of cases skyrocketed.

A 2015 WHO report said the increase was first noted among children. In 2010, 242 children younger than 10 years old were diagnosed with TB, compared to 72 in 2009—a 336 percent increase. While the incidences remain high overall, they are decreasing from those immediately after the earthquake.

Unlike many high-burden countries, though, Peru also has one of the highest TB cure rates in the world at 87 percent for all new TB cases and 66 percent, in 2013, for XDR-TB TB,.XDR-TB. Since 1990, the annual mortality rate per 100,000 people from TB in Peru has decreased by 73.8 percent, an average of 3.2 per year. Globally, the reduction rate for MDR-TB is around 52 percent and 28 percent for XDR-TB.

Although trending in the right direction, Peru’s reduction rate is still slow at around 1.5 percent a year, short of the global reduction of 1.65 percent annually, according to the WHO. To reach the Sustainable Development Goal (SDG 3.3) of ending epidemics of TB and other infectious diseases by 2030, the reduction rates need to increase to at least 4 percent annually.

Peru’s largely positive trajectory began in 1991 when a new government headed by Alberto Fujimori set out to rebuild the country’s infrastructure, which had been destroyed by years of guerilla warfare.

Tuberculosis control was given high priority and the budget increased from US$600,000 to $5 million a year. New policy framework included direct observation treatment (DOTS), free diagnosis and treatment, and providing poor families with food packages both for nutritional support and to encourage compliance with treatment.

The work of Partner’s in Health, a Massachusetts-based NGO which trains volunteers to support TB patients through their treatment is also credited with Peru’s improved TB outcomes.

The UNHLM is intended to secure greater commitments from governments worldwide to reduce TB incidence by 80 percent and deaths by 90 percent and to eliminate catastrophic costs to households by 2030.

Latin America and the Caribbean, may be among the lesser economically developed regions of the world, but it is rich in inspiration provided by leaders like Bolivar. It should come as no surprise, therefore, that the region is edging towards the goal of eliminating TB and solve an old problem that while persistent, is highly soluble.