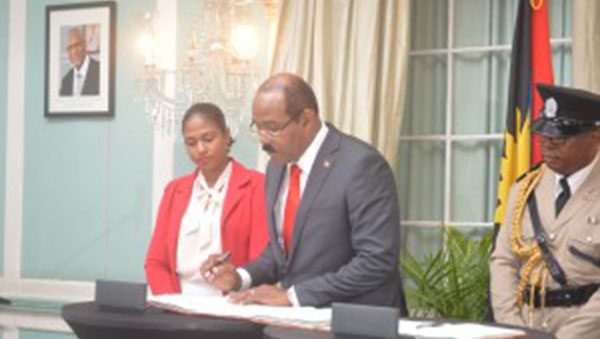 Gaston Browne Re-elected As Prime Minister Of Antigua And Barbuda; Cabinet Sworn In

According to preliminary results, Browne’s Antigua and Barbuda Labour Party (ABLP) defeated the main opposition, United Progressive Party (UPP), 15 to one, while the Bermuda People’s Movement (BPM), secured one seat.

After a brief ceremony at Government House, Browne told reporters that the ABLP had a very good campaign, in the run-up to the polls.

He also urged the UPP to assume a greater level of responsibility in Parliament.

“We recognise that there should be some level of opposition representation. We found that the previous opposition had become personal; they had become extremely rabid and were focused on tearing down the image of several persons, including myself. Unfortunately this strategy did not work,” he said.

He told reporters that he intends to get the ball rolling on all the plans outlined in the party’s manifesto.

“The whole idea is to put them to work immediately,” the Prime Minister said, adding that “ My charge to them is just serve the people and give it their all.”

Later in the day, an expanded Cabinet was sworn in and, among the new faces was Browne’s wife, Maria, who successfully contested the St. John’s Rural East seat, once held by her uncle – Sir Lester Bird. 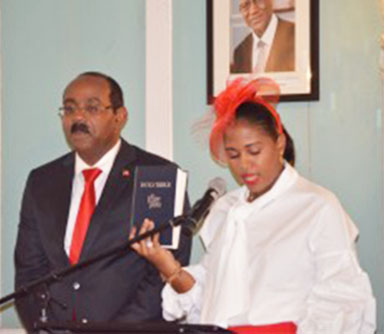 The Prime Minister will retain the finance portfolio within the 13-member Cabinet, while his wife will serve as Minister for Housing, Lands, and Urban Renewal and as a Minister of State in the Ministry of Legal Affairs, Public Safety and Labour.

The representative from St. Peter and former Tourism Minister, Asot Michael, returns to the Cabinet, after being ousted following an arrest in the United Kingdom, in relation to a bribery investigation.

Although he was later released without charge, Browne had promptly relieved him of his ministerial duties.

Sir Robin Yearwood will retain the Public Utilities Civil Aviation Energy portfolio; Melford Nicholas will hold on to the Information, Broadcasting, Telecommunications, Information Technology ministry; while Michael Browne will remain at the Ministry of Education, Science and Technology.

Molwyn Joseph will have responsibility for the newly-styled Ministry of Health, Wellness and Environment, while E.P. Chet Greene will relinquish the Ministry of Sports, Culture, National Festivals and the Arts in exchange for a new assignment at Foreign Affairs, International Trade and Immigration.

Dean Jonas, who was just given his second term as the St. George MP, now receives a cabinet appointment as Minister of Agriculture, Fisheries and Barbuda Affairs.

Lennox Weston, a senator and minister of state in the Ministry of Finance and Corporate Governance in the last administration, will retain that ministerial portfolio, and Public Works has been added to his responsibilities.