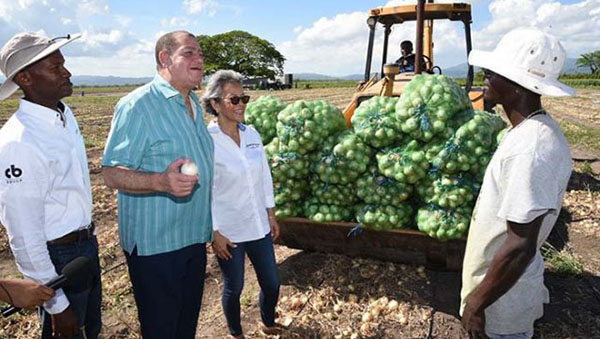 It is a call to which the Caribbean Broilers Group is responding through its Crop Division subsidiary, Imagination Farms, situated at Hill Run, St. Catherine, where it has 12, of over 400 acres of land, under onion cultivation.

Data provided by the Caribbean Broilers, more popularly known for meat production, indicate that over the past five years, domestic onion consumption soared to 10 million kilograms per annum, of which imports accounted for approximately 85 percent.

Against this background, Shaw emphasized that “we have to begin to chip away at that (85) percentage”, through increased domestic cultivation.

He was speaking with journalists, following a tour of Imagination Farms, last Friday.

Caribbean Broilers Group Operations Manager, Don McGlashan, said that the entity is seeking to produce enough onions, from the 12 acres under cultivation, to contribute to reducing imports by an initial 10 percent, with a view to increasing this to 50 percent, over the next five years.

Noting that the Mercedes and Polaris varieties of onions are currently grown at the farms, McGlashan said the entity wants to contribute to reducing the ratio of imports.

“We (Jamaica) are importing about nine million kilograms and we want to be a part of the process to arrest this situation. We have started on a good road. Our yields have been good and, at the end of the harvest in another 10 days, we should be doing as well as anybody in first-world countries,” McGlashan added.

“Right now, Monymusk only uses about 6,000 acres of land, which is in cane production. When we improve the conditions there, by getting more small, medium and large farmers (involved in) producing cane, we’re… going to need about 15,000 acres,” he said.

The Minister also reiterated that over 20,000 acres of land are going to be available for lease and sale.

“We’re going to put them in the hands of serious people who are going to plant (crops, and from these,) process and use what we can locally (for general consumption) and in the tourism industry,” he added.

Meanwhile, Shaw underscored the need to boost the ratio of domestic crops consumed within the hospitality sector, which he said totals five percent.

The Minister said against the background of inputs from stakeholders, such as the Caribbean Broilers Group, he is optimistic of a turnaround in this regard

They are also working with value-added processors to provide them with produce and to enter into long-term contracts for supplies.

Caribbean Broilers’ management anticipate that, similar to its livestock operation, they can partner with small farmers to provide them with access to research inputs and engage them as independent contract growers.