New in Pride
Home / International News / Perpetrators Of Corruption In Guyana Should Be Prosecuted And Jailed, Says British High Commissioner 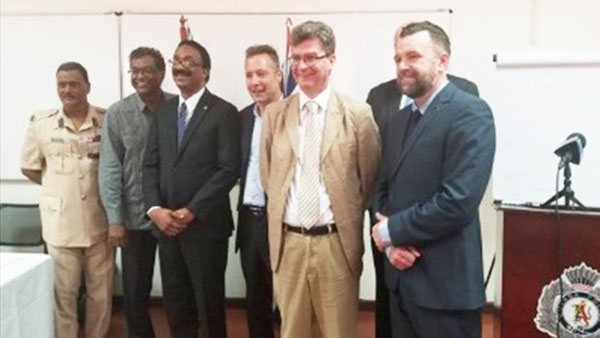 Perpetrators Of Corruption In Guyana Should Be Prosecuted And Jailed, Says British High Commissioner

GEORGETOWN, Guyana, April 9, 2018 (CMC) – A two-week Financial Investigation and Anti-Corruption training program, began here today, with a warning from a senior British diplomat, that persons engaged in corrupt practices in Guyana should be jailed.

“There is no place for corruption within the security agencies in Guyana. If officials or individuals cannot work with honesty and integrity, then they should be drummed out, prosecuted and imprisoned as necessary. If people don’t like the sound of that, then frankly, tough,” said the British High Commissioner to Guyana, Gregg Quinn.

The training program is being funded by London and builds on work already done in this area by the Special Adviser attached to Special Organised Crime Unit (SOCU), Russel Combe, who is due to return, here, for another one-year assignment.

Quinn told the opening ceremony, which was also attended by Attorney General, Basil Williams, and Public Security Minister, Khemraj Ramjattan, that security agencies cannot expect respect and cooperation if they, themselves, are not subject to the law.

“All of you here, today, can and must set the example for everybody else to follow,” he advised.

Williams told the delegates that the David Granger administration has been fighting “government corruption” for the last three years and that, “from the outset of this government, we declared war against corruption, in all its forms”.

But he said the act of overpayment to contractors must stop, since it amounted to corruption and proved to be one way to rob the government of millions of dollars, to the detriment of the development of the country.

The two week program is being conducted by officials from the United Kingdom, with over 30 years experience in fraud and anti-corruption matters,

The program will focus on investigating serious and complex fraud, bribery and corruption cases, and an examination of major fraud and bribery case scenarios, designed for the participants to put into practice.