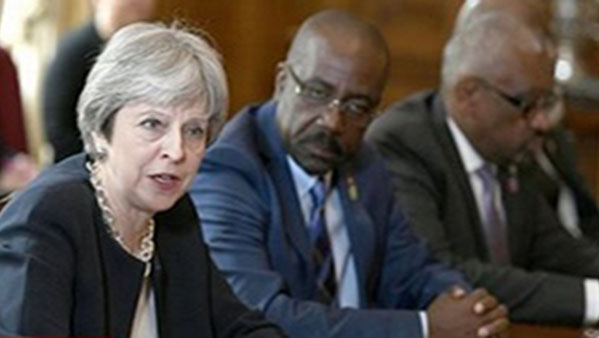 British Prime Minister Theresa May in talks with Caribbean leaders.

“I want to apologise to you today. Because we are genuinely sorry for any anxiety that has been caused,” she said.

“I want to dispel any impression that my government is in some sense clamping down on Commonwealth citizens, particularly those from the Caribbean,” May told the meeting.

“Those who arrived from the Caribbean before 1973 and lived here, permanently, without significant periods of time away in the last 30 years, have the right to remain in the UK.

“As do the vast majority of long-term residents who arrived later; and I don’t want anybody to be in any doubt about their right to remain here in the United Kingdom.”

She said the current controversy had arisen because of new rules, introduced by her as home secretary, designed to make sure only those with the right to remain in the UK could access the welfare system and the National Health Service (NHS).

“This has resulted in some people, through no fault of their own, now needing to be able to evidence their immigration status,” she said, adding that “the overwhelming majority of the Windrush generation do have the documents that they need, but we are working hard to help those who do not”.

Many Caribbean nationals came to Britain in 1948, when the ship, Windrush, brought over the first group of West Indian immigrants.

Last weekend, the Barbados Government Information Service (BGIS) said an action plan to secure a permanent solution to the situation may be high on the agenda at the April 19-20 Commonwealth Heads of Government Meeting (CHOGM) in London.

It said that it is anticipated that the situation will be thoroughly dealt with, should officials decide to discuss the problems facing undocumented residents, which include the denial of access to critical services.

Jamaica’s Prime Minister, Andrew Holness, who was among the CARICOM leaders meeting with Prime Minister May at 10 Downing Street, said he wanted a “speedy” response to the situation, indicating that those people being threatened with deportation had “significantly contributed to the building and enrichment of the country”.

“Now these persons are not able to claim their place as citizens”, he said, telling Prime Minister May, “Prime minister, we welcome your response and we look forward to a speedy implementation of your proposed solution.

“It will lead to security, certainly for those who have been affected… It is time for the inclusive prosperity, for which we stand as Commonwealth people.”

Antigua and Barbuda Prime Minister, Gaston Browne, had indicated that an apology from Prime Minister May “would be welcome”, but he was “pleased” the government had stepped in.

“Many of these individuals do not have any connection with the country of their birth, would have lived in the UK their entire lives and worked very hard towards the advancement of the UK,” he said.

Britain is reported to have written to each of the governments involved, setting out how it intends to rectify the situation, notably by helping anyone affected, to find the necessary paperwork to regularise their immigration status.

Home Secretary, Amber Rudd, told Parliament that she is “very concerned” about the way in which the Windrush generation have been treated, and acknowledged that the Home Office had become “too concerned with policy and strategy, and sometimes loses sight of the individual”, in the recent past.

Rudd said that a new taskforce, with the aim of ensuring the Windrush generation receive the paperwork they need to confirm their immigration status within two weeks, had been established. She also told legislators that the fees, involved in going through the process, would be waived.

Under the 1971 Immigration Act, all Commonwealth citizens already living in the UK were given indefinite leave to remain. However, the Home Office did not keep a record of those granted leave to remain or issue any paperwork confirming it, meaning it is difficult for the individuals to now prove they are in the UK legally.

Under the 2012 new policy, extra documentation is demanded from people who arrived in the UK many decades ago, and consider themselves British. Some people have been threatened with deportation to countries they left as children 50 years ago.

Others have been denied access to healthcare, lost jobs, or been made homeless as they do not have sufficient paperwork to prove they have the right to be in the United Kingdom.