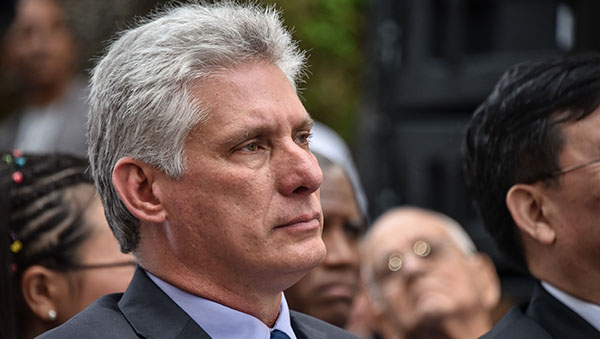 HAVANA, Cuba, April 19, 2018 (CMC) – A new era dawned in Cuba, today, when 57-year-old Miguel Díaz-Canel was sworn in as the new president of the communist country, replacing Raúl Castro, who decided to bring to an end the Castro family’s decades-long rule on the island.

Díaz-Canel had been serving as first vice-president for the past five years.

The National Assembly, the country’s legislative body, nominated Díaz-Canel, even as political observers say Castro will remain in a powerful position, staying on as the head of the Communist Party and the military, until its next congress in 2021.

In his inaugural speech, Díaz-Canel said that his mandate was “to ensure the continuity of the Cuban revolution at a key historic moment”, and assured the members of the National Assembly that “the revolution continues its course”.

He also said that the country’s foreign policy would remain “unaltered” and that any “necessary changes” would be decided by the Cuban people, adding that there was “no room in Cuba for those who strive for the restoration of capitalism”.

“Cuba needs you,” he said, prompting the more than 600 National Assembly members to rise to their feet and give the 86-year-old former leader a standing ovation.

In 2013, Diaz-Canel was regarded as Castro’s right-hand man, and for the past five years, he has been groomed for the presidency and the handover of power.

He studied electrical engineering and began his political career in his early 20’s as a member of the Young Communist League in Santa Clara.

While teaching engineering at the local university, he worked his way up the ranks of the Young Communist League, becoming its second secretary at the age of 33.

However, he faces a challenging period in office. Cuba’s economy is weak, and he needs to implement policies to reinvigorate the economy, by pushing ahead with the controversial economic reform program, launched by his predecessor.

Relations with United States, which appeared to be improving under former US President, Barack Obama, have deteriorated under current President, Donald Trump.

In June 2017, Trump declared he was “cancelling” some Obama-era Cuba political reforms and re-tightening parts of the decades-long economic embargo that Washington imposed, soon after Fidel Castro overthrew the Batista government in 1959.