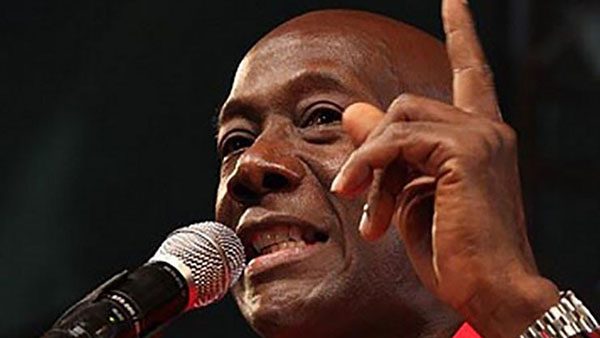 Trinidad And Tobago Not A Refugee Camp, Explains Prime Minister

PORT OF SPAIN, Trinidad and Tobago, April 26, 2018 (CMC) – Prime Minister, Dr. Keith Rowley, has reiterated his administration’s position, regarding the repatriation of 82 Venezuelan nationals last week, stating that the twin-island republic adhered to the highest standards in handling the matter.

During today’s post-Cabinet press briefing, the Prime Minister expressed concern over the misinformation currently in the public domain, and said that he intends to formally complain to the United Nations about comments made by representatives, adding that there is a legal process that needs to be followed in Trinidad and Tobago, by all potential migrants.

He noted that as the situation in Venezuela deteriorates, more and more persons have been entering the twin-island republic.

“Bear in mind, we are not China, we are not Russia, we are not America. We are a little island, limited space of 1.3 million people and, therefore, we cannot, and will not, allow the UN spokespersons to convert us into a refugee camp,” he said.

On Tuesday, government officials held talks with senior United Nations officials, in a bid to “correct the misinformation in the public domain”, regarding the deportation of nearly 100 Venezuelan nationals, last weekend.

The statement said that both Dillon and Al Rawi “took the opportunity to, once again, emphasize the fact that the government of Trinidad and Tobago respects the human rights of any person, who seeks asylum in Trinidad and Tobago.

The United Nations has expressed concern that a number of Venezuelan nationals, who had sought asylum in Trinidad and Tobago, had been deported to the South American country, over the last weekend.

On Monday, the United Nations said it was concerned for the welfare of the Venezuelans, some of whom, had reportedly sought asylum here.

The Living Water Community (LWC), a religion-based organisation that works with the UNHCR, said that it too, had received reports of Venezuelans being deported.

Amnesty International, in an open letter to the Prime Minister, also expressed concern at the situation.

“Amnesty International has received information that suggests that those, returned, did not do so voluntarily, contrary to the Minister’s claims, but were presented with papers to sign, in a language they do not understand, stating that they would return voluntarily,” it said.

“If indeed those deported were forcibly returned, without an individualised assessment or having the opportunity to challenge or appeal their deportation orders, without having their legal options explained to them, in a language they understand and without access to their lawyers or UNHCR, the actions of your government have undermined due process, your government’s own policy on asylum, and your country’s international human rights obligations. This cannot be repeated,” Amnesty International said.

But the government statement, Tuesday, reiterated that “the repatriation exercise” was strictly carried out on a voluntary basis, in collaboration with the Ambassador of Venezuela to Trinidad and Tobago, Coromoto Godoy Calderón.

“The government of Trinidad and Tobago also expressed its commitment to treating all persons, humanely and fairly, and to upholding its international obligations,” the statement said, noting that “at the end of the very cordial meeting, both parties agreed to continue the ethos of collaboration and cooperation.”

“The government remains cognizant of its responsibility, to look after the national security interests of the citizens of Trinidad and Tobago,” the statement added.