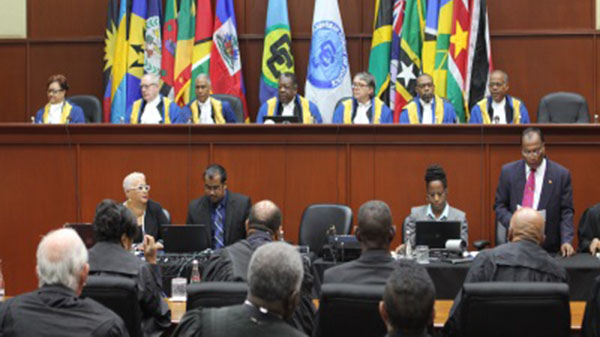 Outgoing President of the Caribbean Court of Justice (CCJ), Sir Dennis Byron (center), at the Antigua and Barbuda High Court, during a recent special sitting.

Sir Dennis, 75, who leaves the Trinidad-based CCJ on July 3, was praised during a special sitting of the Antigua and Barbuda High Court, for his years of service to the region and the international community, as a lawyer and a judge.

“Sir Dennis, you are, you were and you will be Sir Dennis, a man. Sir Dennis you touched the lives of so many persons in this country, in the region and internationally. You are truly a Caribbean man, a man who contributed not only to the development of Caribbean jurisprudence, but the development of many a lawyer in the region,” Antigua and Barbuda’s Attorney General, Steadroy “Cuttie” Benjamin, said.

He said he would always be grateful to the advice of Sir Dennis, who instilled in him the need to have proper preparation in order to prevent poor performance, and this is a message he, too, would like to leave with the wider regional community.

“He has served the region with great distinction,” she said, noting that when he went to serve as a permanent Judge of the United Nations International Criminal Tribunal for Rwanda, which is located in Tanzania, he did so, again with much distinction.

“President Byron has legitimately earned the respect of all his colleagues and peers as one of the greatest jurist from the CARICOM region and beyond,” she said, in her message that was read out by Justice Clare Henry, of the Eastern Caribbean Supreme Court.

The founding President of the Commonwealth Judicial Educational Institute and retired judge, Justice Sandra Oxner, praised Sir Dennis’s “legacy to the Caribbean, the Commonwealth and the world”, saying it is an impossible task to sum up the achievements of the retiring jurist.

Sir Dennis was first appointed as a High Court Judge of the Eastern Caribbean Supreme Court in 1982, after a distinguished career in private practice. Subsequently, he served as Chief Justice of the Eastern Caribbean Supreme Court and President of the International Criminal Tribunal for Rwanda. On September 1, 2011, he was sworn-in by the Governor-General of St. Kitts and Nevis as the second President of the CCJ.

Sir Dennis’s judicial career spans a total of 36 years, throughout which time he left an indelible mark on each of the three judiciaries over which he presided, both as a judge of high distinction and as a judicial reformer.

In his remarks, Sir Dennis said he was “deeply touched by the kind and generous words from all the speakers”, and that he hoped, in the years to come, “I will have opportunities to continue to engage in discussions on the many subjects which evoke passionate interests in me”.

He said he was thankful to God for “a life that has already spanned more than seven decades” and that his early upbringing in the Methodist Church in St. Kitts, “has profoundly influenced my life and my desire to serve”.

“It has helped to shape my ideas on concepts of justice and mercy, has provided clarity in the midst of challenges and given me courage to dispense justice without fear or favour,” he said, praising also his parents, whose influence “on my upbringing and early education played a critical role in preparing me for service to the region”.

He recalled his years working throughout the Caribbean and “those brilliant legal submissions and argumentations, and the invaluable interaction with judicial colleagues, even when in disagreement; they were all important tutorials” for him as a judge.

“That was my real schooling. I am grateful to all those who played a part in the refinement and honing of my knowledge and skills.”

He said the principles of judging and judicial capacity development that he has learnt and tried to impart around the world, had made him a better person, and that his “judicial journey, which has carried me from the bottom to the top of the Eastern Caribbean Supreme Court, and not to omit the judiciary of Grenada when it had seceded from the Eastern Caribbean Supreme Court, and the international Criminal Tribunal for Rwanda has been most remarkable.

“I must say that the opportunity to serve humanity in that capacity provided tremendous learning experiences and spiritual satisfaction. I have seen and heard from some, who have been at every junction along the way and the impact that I may have made. But the truth is that I am more conscious of the tremendous impact that it and every step of the way has made on me.”

Sir Dennis, the second Caribbean national to head the CCJ, which was established in 2001 to replace the London-based Privy Council as the region’s final court, said that his tenure had been “a wonderful experience for me”.

“Even with all my experiences of judiciaries around the world, sitting side by side with judges from every continent on the bench of an International Court, I am extremely proud to have been part of this outstanding court with judges of the highest calibre, work ethic and integrity.

“The culmination of a lifelong dream to be part of a final Caribbean court has only been eclipsed by the sheer enjoyment of working in an environment of such high intellect and quality,” he said, praising the work of his colleagues.

“I am a witness to contributions the court and its judges have made to the development of a Caribbean Jurisprudence and to facilitating regional integration. It has been an honour to serve amongst some of our region’s finest men and women, all of whom take immense pride and diligence in discharging their duties. And I leave optimistic about the future journey of the CCJ, under the able leadership of my brother, Justice Adrian Saunders, who has already distinguished himself, over the last two and half decades, with his scholarship, energy and leadership qualities.”

But he said that his pleasure with the environment at the court goes well beyond his judicial colleagues, paying tribute to those who, behind the scene, had ensured the smooth running of the establishment.

“I want to say thank you to the Caribbean man and the Caribbean woman. Over the years my engagement in discussions with our ordinary folk have made me realise that the holders of the higher echelons of power, authority and education are not the sole repositories of wisdom in our communities.

“These people have helped to keep my feet on the ground and sustain my belief that this region is more advanced and deservers higher credit that we are willing to give ourselves.

“I think that I have been buoyed up by friendships that have guided, protected and assisted me along the way. The names are too numerous to mention,” he said.

Paying tribute to his family for standing up with him, while he pursued his dreams, he said, “As time has crept up on me, I have become acutely conscious of this and promise and pray that one of my priorities in retirement is to try and do better at being fully present for you.

“Yet despite my deficiencies in this regard, I have never felt bereft of your love and I am grateful.”