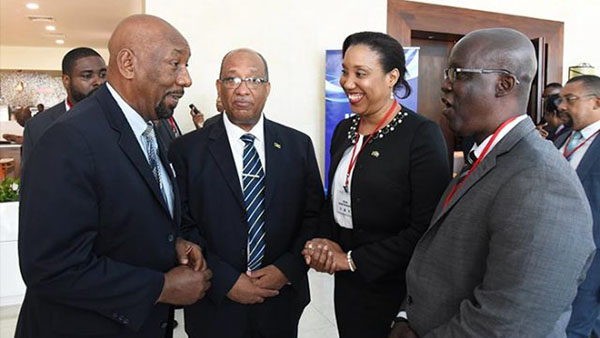 KINGSTON, Jamaica, May 30, 2018 (CMC) – Caribbean border security officials have been urged to collaborate more in the fight against cross border illegal activities, including terrorism.

“Many of us are confronting issues we have never had to grapple with before, at a rapid pace that demands partnership. In the face of porous borders, shifting criminal and terrorist threats, it is indeed true that no man is literally an island and no man, or country, succeeds alone,” Minister of State in Jamaica’s Ministry of National Security, Rudyard Spencer, told delegates attending the Caribbean Community (CARICOM) Joint Standing Committees of Chiefs of Immigration and Comptrollers of Customs (CICC) that ends, here, tomorrow.

Spencer said that in an age of terrorism, cybercrime and organised criminal networks, CARICOM continues to face rising levels of crime.

“Gang warfare, in the never-ending battle for control of scarce resources, continues to tear apart the social fabric of our communities and countries, and destroy the lives of so many of our young people.”

Spencer urged the chiefs of immigration and comptrollers of customs to continue promoting the rejection of corruption — in the forms of illegal drug trade, trafficking of firearms, identity theft and data breaches — among their nationals they have employed, and citizens.

“One of the most effective ways we can confront the challenges outlined, is to reject corruption and the behaviours that support it. Never forget that no criminal act can bear fruit without compromise and someone deciding to look the other way,” Spencer observed.

He told the conference, hosted by the Passport, Immigration and Citizenship Agency (PICA) and the Jamaica Customs Agency (JCA), that it was “timely” Jamaica was hosting the event.

“This meeting could not have been convened at a more apt time, as there is an agreed level of urgency to collaborate across the region to confront and overcome the various existing, and emerging, challenges,” he said.

The meeting, which is being attended by at least 60 delegates, will be reviewing the immigration processes, determining the current status of regional security structures, and assessing the need for modification, in view of new and emerging trends.

It will also address security challenges, being faced by CARICOM member states, that are contributing to the rising levels of criminal activities, such as the illegal drug trade, trafficking in firearms, human trafficking and smuggling, gang warfare, the deportation of criminals, unemployment, and corruption.

Chair of Immigration, CARICOM, Wayne Marshall, told the meeting, he wanted more partnerships taking place between the various stakeholders in the region, with regard to safeguarding the ports.

“We must work together on common security challenges. It not only facilitates stability in our region, but it leads to safe and secure movement of people, as well as goods and services. Together, we must tackle illegal cross-border activities. We must fight organised crime, including corruption, illegal migration, drug smuggling and trafficking of human beings,” Marshall added.

“Only by working together can we succeed. We need to strengthen good management… where immigration, customs, police and other relevant authorities work together,” he elaborated.

Meanwhile, the assistant director for the CARICOM Implementation Agency For Crime and Security, Earl Harris, warned Caribbean countries, in a recent media report, to be vigilant in the fight against terrorism, even as he noted that the terrorist group, ISIS, has been being virtually dismantled.

“The enemy is real. We are seeing in the region a lot of irregular migration, especially in Trinidad and Tobago, of foreign terrorist fighters from the Middle East,” he told the Jamaica Gleaner newspaper.

“When you do the analysis, you will see that it is increasing exponentially. A lot of the work we do, is to engage member states in forums such as these, to learn what their needs are and the skill deficiencies and gaps.

“Terrorism is a sleeping threat. You have to be constantly aware of it. Even though the war has been won against ISIS in the Middle East, there are sleeper cells in the region. There are persons attempting to enter the region through the citizenship by investment program, and they also enter by being smuggled through porous borders,” Harris said.