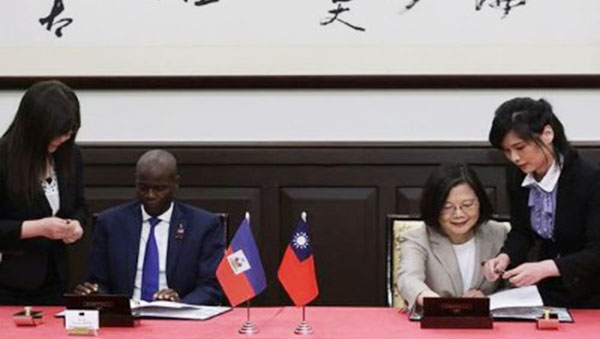 TAIPEI, Taiwan, May 30, 2018 (CMC) – The Republic of China, commonly known as Taiwan, since May 20, 2016, and Haiti have signed an agreement, aimed at further strengthening their bilateral relationship.

President Tsai Ing-wen and Haitian President, Jovenel Moise, signed the accord that both countries said would prove beneficial to their population.

The agreement calls for the establishment of a high-level taskforce that will draft, within 60 days, new terms of collaboration on economic and infrastructure development in the French-speaking Caribbean Community (CARICOM) country, as well as potential ways to attract more Taiwanese investors.

Haiti is among a handful of CARICOM countries that still maintain diplomatic relations with Taiwan, which China considers to be a renegade province and during the signing ceremony, President Moise, who is on an official visit to the country, thanked Tsai and the people of Taiwan for their long-term support of his country’s development,

Tsai responded by reaffirming Taiwan’s willingness to help on such mutually-beneficial projects, and said she looks forward to communication and understanding being the foundation of all future collaboration.

Moise pledged his support for Taiwan and reiterated his support for the country’s participation at the World Health Assembly (WHA), the United Nations Framework Convention on Climate Change, and the International Civil Aviation Organization.

Haiti is among the 15 World Health Organization member-states that proposed putting the issue of Taiwan’s participation, as an observer at the WHA, on the agenda of the assembly’s 71st session, which ended in Geneva last Thursday.