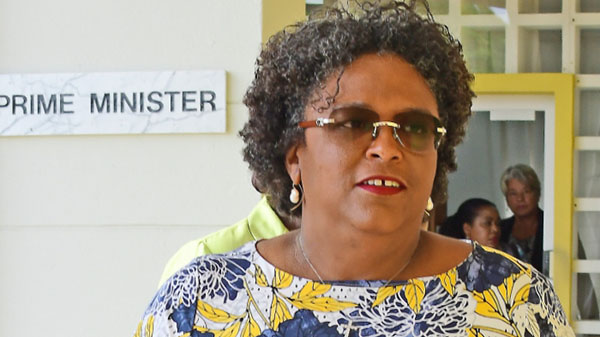 BRIDGETOWN, Barbados, June 1, 2018 (CMC) – Prime Minister, Mia Mottley, announced, today, that her new administration would suspend payments, due to domestic and external creditors, as she appealed to them to “accompany us on this journey”, in revitalising the ailing Barbados economy.

“From today we are suspending payments, due to external commercial creditors. Similarly we will endeavour to make scheduled domestic interest payments. However, domestic creditors will be asked to roll over principal maturity until we reach a restructuring agreement,” Mottley said, following a meeting with the Social Partnerships.

“The truth is, our debt has been unsustainable territory for some time. The arrears represent an effective default by the previous government to Barbadians,” she said, noting that these arrears were BDS$1.7 billion at the end of September, last year, and that new figures are expected next week.

“We have never taken this type of creditor action before, and our action today is designed, my friends, to ensure that we will never ever have to do so again,” she said, hinting at stringent policies ahead for Barbadians.

She said the new measures will be introduced in a ministerial statement, in two weeks, and will place the public debt “on a sustainable footing”.

“Creditors will thank us for that. Unsustainable debt is of no use to anyone. The restructuring I announce, today, is only but one part of a comprehensive economic reform program,” she said, that will stabilise the public finances after years of mismanagement.

Mottley said there was need for total collaboration on the journey to “rescue, rebuilding and transformation”.

“We did not choose to be here, but we are here. We move forward together, my friends, in a spirit of openness, with a covenant of hope and opportunity, upward and onward we shall go, inspired …and greater will our nation grow in strength and unity,” said Mottley, flanked by members of the Social Partnership.

She said that the path ahead is “gruelling, but as more and more of you gather around and as we march out together, I tell you, you will find that a new dawn is breaking”.

The state of the Barbados economy had been a major issue in the campaign for the May 24 general election, in which Mottley led her Barbados Labour Party (BLP) to a clean sweep of all 30 seats in the Parliament, defeating the incumbent Democratic Labour Party (DLP) that had been in power for the past 10 years.

The Central Bank of Barbados (CBB) had, last month, said that the local economy had contracted by an estimated 0.7 percent during the first quarter of this year and warned that the outlook “remains challenging”.

CBB Governor, Cleviston Haynes, in a review of Barbados’ economic performance in the first quarter of 2018, said that the performance reflects the combined impact of a decline in real output in the tourism sector, the slowing of construction activity, the late start to the annual sugar harvest and the slowdown of domestic demand, arising from the budgetary measures announced in the May 2017 budget.

The CBB said that while the supply of foreign exchange was more than adequate to meet market demand, on a timely basis during the quarter, “higher public sector debt service obligations, than usual, contained the growth of international reserves at the Central Bank to BDS$14 million for the period”.

The Central Bank said that decisive stabilisation measures that place the public finances on a sustainable path, alter the trajectory for the international reserves and create the conditions for strong durable growth, are now needed in order to deal with the challenges ahead for the local economy.

Earlier, prior to the start of the talks with the Social Partnership, Prime Minister, Mia Mottley, said her immediate focus would be on protecting the local currency.

“We now go into a bit of the heavy lifting and the drilling down,” she said, adding that it was extremely important for the Social Partnership to be aware of exactly where the country stands, financially, before coming up with a plan to let the country move forward, and that regular meetings would be paramount.” 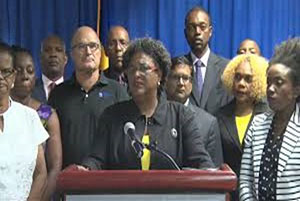 Following the discussions, Mottley told Barbadians “there is no avoidance in delay when treating with the economic and financial position in which we find ourselves”.

“Our national rescue and rebuilding starts today. We set course not on the easy or quick path,” she said, warning that in order to get out of the present situation “we need to invest in our people, our education, our health, our safety and our public infrastructure”.

“Hope must be matched with real opportunities,” she said, including developing new skills, finding new jobs, new investments among other initiatives.

“We believe your government can achieve these things by spending more wisely in greater openness with the people. Not by spending and taxing more,” she said, arguing that this approach to development for the last 52 years “will not be as readily available, as we must now deconstruct what government does and reconstruct it to fit our needs and today’s technologies”.

Mottley said there are new things to be done and in the process “rid ourselves of the corruption of the past and put in place a range of arrangements that ensure that we are never ever in this place again”.

She said the new transformative path by her administration would encourage Barbadians, here and abroad, as well as attract new investment opportunities and build new infrastructure, describing the process “as a marathon”.

She said when the last administration came to office a decade ago, it inherited a debt of about six billion Barbados dollars “yet they have left us with a debt level, when arrears are added, of over BDS$15 billion.

“Public debt, as a proportion of our national income, is being regarded as high as 171 percent of GDP (gross domestic product),the third highest in the entire world,” she said, noting that only Japan and Greece are above Barbados.

She said every year Barbados spends BDS$800 million in interest on the debt and, this year, the island will spend a further one billion dollars on meeting promises to pay back what was borrowed.

She questioned, on what projects did the last administration spend such large sums of money, asking “where did the nine billion dollars of extra debt come from?”

She said less than one percent of that debt would have paid for a new sewage system for the south coast, a reference to the ongoing sewage problem in that tourist section of the island that has been criticised by various private sector concerns and the general public.

“Regrettably, we have nothing to show for this debt. The last government put itself in a trap, water spending pushed up the debt and pushed up interest payments, so they raised taxes, which stopped the economy from growing,” she explained.