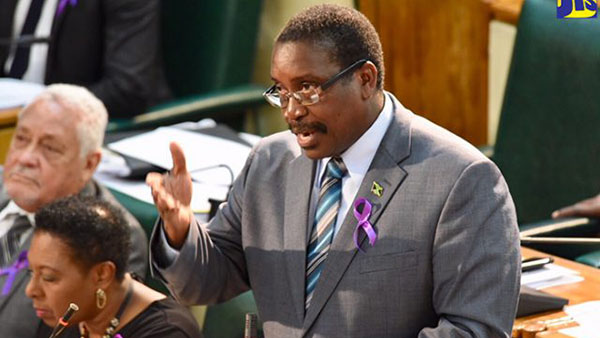 Jamaica Transport and Mining Minister, Robert Montague, seen addressing the Jamaican parliament, said “We are consulting with the US government, the Russian Embassy and UC Rusal."

KINGSTON, Jamaica, June 1, 2018 (CMC) – The Jamaica government has established a task force, to address any fallout in bauxite operations, from the decision of the United States to place sanctions on imported steel and aluminium.

Kingston says the applied sanctions could have an effect on the Russian owned company, UC Rusal, based here.

The sanctions, which were applied by the US on April 18, will affect operations at the Windalco plant in Ewarton.

“We are consulting with the US government, the Russian Embassy and UC Rusal. We will update the country, in a more fulsome way, very soon. Discussions are at a very delicate stage,” Montague said, adding “we are aware of some of the challenges, but we cannot yet show our full hand. We have also moved to protect the interests of our citizens and their assets”.

He said the Andrew Holness government has had a series of consultations with the stakeholders, with three principles in mind: protecting the workers’ jobs; protecting the environment; and safeguarding the country’s economy.

He told legislators that the government has revoked the mining permits around some of the lands at Kirkvine.

“We have kept the lines of communications open to all stakeholders, as we seek to find a solution. This is a Jamaican matter and we must find a solution that suits Jamaica first. Let me be very clear, this crisis was not of our own making, but we will rise to the challenge,” he said, adding “we will continue to lead the way in finding suitable accommodation to all the interests in this matter”.

Meanwhile, the European Union said, today, it plans to bring its case against new U.S. tariffs on steel and aluminium, to the World Trade Organization (WTO).

If that happens, the 28-nation EU would join China and India in triggering the WTO’s dispute settlement mechanism over the American trade penalties.

The EU has already prepared US$1.6 billion in retaliation against U.S. goods, including steel, orange juice, motorcycles and bourbon whiskey.