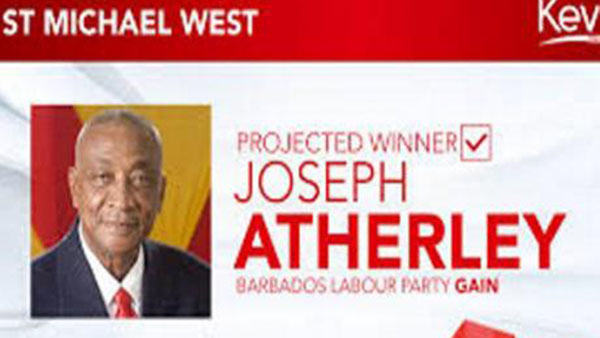 BRIDGETOWN, Barbados, June 1, 2018 (CMC) – Exactly one week after he was elected to Parliament as a member of the Barbados Labour Party (BLP), Bishop Joseph Atherley has announced his intention to quit the government.

A government statement, issued on Thursday night, said that the Member of Parliament for St. Michael West has informed Prime Minister, Mia Mottley, of his intention to serve in opposition to the BLP, which won all 30 seats in the May 24 general election.

“This was further confirmed, by letter, from her Excellency the Governor General Dame Sandra Mason,” the brief statement said.

Political observers say the development follows the naming, by Mottley, of her 30-member Cabinet last weekend, with Atherley, who is head of the Evangelical Holiness Christian Community Church, being a glaring omission.

They note also, that another legislator, Gline Clarke, who has also expressed disappointment over being left out of the Cabinet, has however, indicated that he would not be crossing the floor.

Prime Minister Mottley had, last weekend, noted that she was exploring the possibility of amending the Constitution to allow for the opposition party, with the most votes, to be able to nominate two members to the Senate.

The move by Atherley could put an end to such an idea, given that, as Opposition leader, he would now be in a position to appoint his own senators.